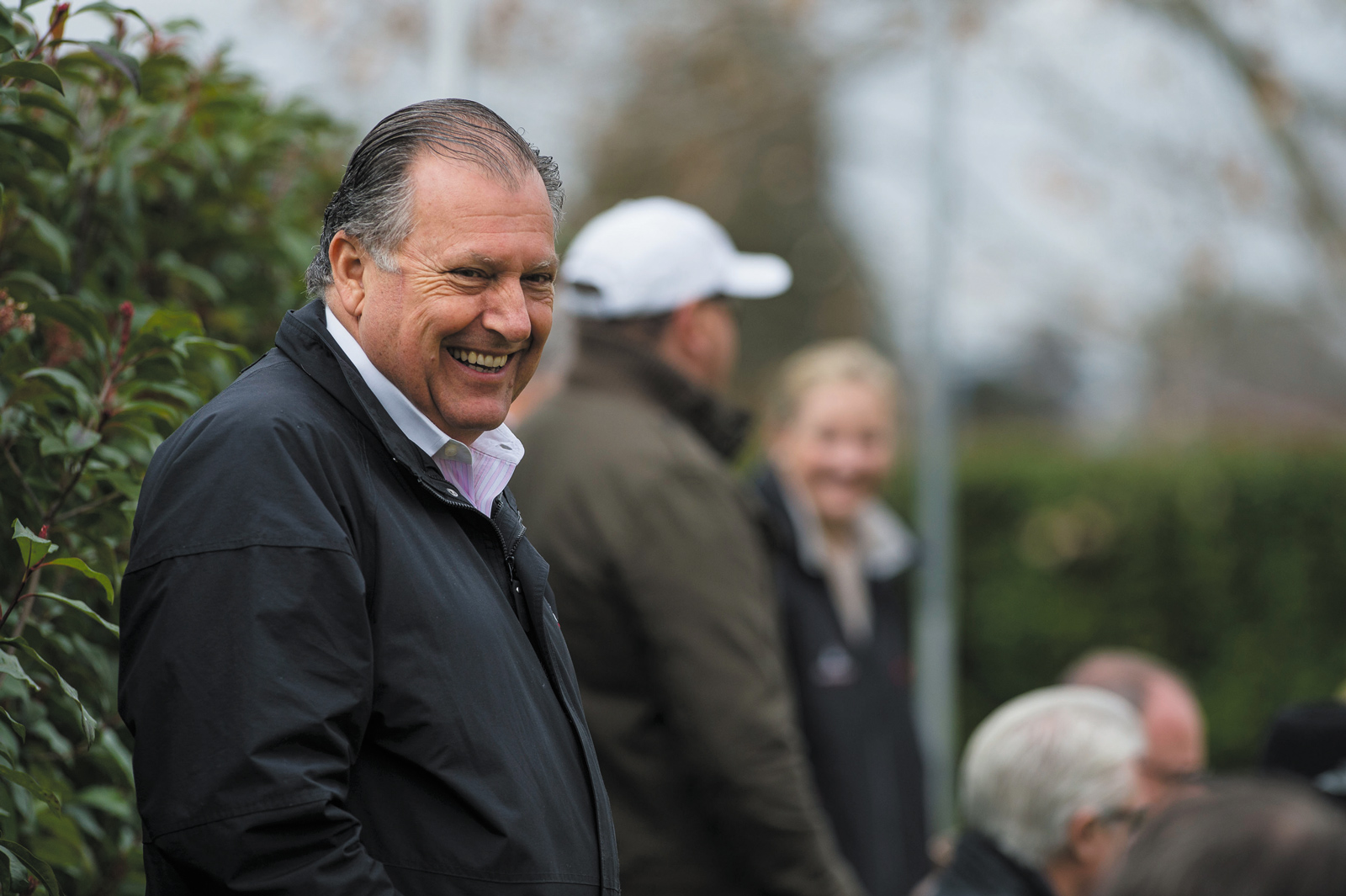 ARROWFIELD Stud has launched and managed the careers of some of the most influential thoroughbred stallions in Australia during the past 30 years. Danehill and Redoute’s Choice are obviously the flag bearers, but others such as Flying Spur, Danzero, Hussonet and Snippets have also been major successes. In more recent years, names such as Charge Forward, Not A Single Doubt and Snitzel have become synonymous with Arrowfield and with John Messara, the man who had faith in them. Messara is the current Chairman of Racing NSW and has a number of awards (including an Order of Australia), many career achievements and is a proud husband, father and grandfather. His earliest years may have been challenging, but he has led a most interesting life in horse racing, the sport he is most passionate about.

Q: John you were born in Egypt and came to live with family in 1958, while waiting for your parents to make the journey; how old were you when you came to Australia?
A: “I was 11 when my family sent me to Sydney to live with an uncle and aunt until my parents also emigrated three years later. Until I came to Sydney we lived within the expat community in Alexandria, and I attended English schools. However, French was the home language so I have been lucky to be bilingual. Life was great there in those times and we lived close to the sea. Racing was also very active and my family were into racing, so I was ‘blooded’ into the sport early.”

Q: What school and university did you attend?
A: “I attended St Ignatius College, Riverview from the time of my arrival in Sydney. Like many lads, I was not a very ‘interested’ student academically, preferring to throw my attention to the sports of rugby and athletics. However, I do remember being paraded from class to class by the senior French master so that students could hear “how French should be spoken! “I matriculated in 1964, and entered the Commerce Faculty at the University of NSW. Looking back now, I very much appreciate the Jesuit education I received at Riverview and many other members of my family have since followed suit. I really threw myself into my studies at university and won a scholarship for the final two years. I enjoyed economics, commercial law and finance and found no trouble studying.”

Q: I understand you became a CPA after attaining your Bachelor of Commerce?
A: “I chose the right suite of subjects at university to facilitate my CPA status, but I only worked as an accountant for 12 months after university before joining a stockbroking firm. I spent 30 years in stockbroking, including during the wild and woolly days of the mining boom. After that I committed myself full time to racing and breeding through Arrowfield.”

Q: One of your stockbroking positions enabled you to be working overseas for a while. What role were you filling during that time in Geneva?
A: “I was in Geneva for around 18 months at a fairly early age (23). I was setting up a European branch for a Sydney broking firm as in those days it was impossible for foreigners to obtain a permanent working permit in Switzerland. I really enjoyed living and working in Geneva, but then returned to Australia and ultimately set up my own little firm.”

Q: You mentioned that your family had an interest in racing?
A: “Yes, I had grown up with racing to some extent as my father, his brother Joe and my grandfather owned horses and they liked a bet. So I attended the races both in Alexandria, and in Sydney as a teenager. However, it was not until 1979, when I was 32, that I became seriously involved. It was then I acquired a share, with my then stockbroking partner, in the VRC Oaks winner Scomeld.

Q: When did you commence operations at Arrowfield?
A: “Arrowfield came to life officially in 1985, although I had begun dabbling in the industry from 1979. So we have just celebrated 30 years in business.”

Q: You acquired the majority interest in a three year-old colt called Danehill back in 1989. Obviously you could not have known then the influence he was going to have in the future, but why did you choose him, among a multitude of colts who would have been available at that time. And how did you feel when you first saw him?
A: “We did a desktop study of all the sons of Northern Dancer, who was fast becoming a breed shaper. Our study confirmed Danzig was the unsung hero amongst his sons, but was probably more of a grass horse, so he was not so highly rated in America. But then there were fewer Danzigs running in Europe, so he flew under the radar there too. “However, the stats don’t lie! Danzig was a stallion who left fast turf horses and a very high ratio of elite runners, exactly what we needed in Australia. Our next task was to identify one of his sons as a stallion prospect and track him until he reached Gr.1 status. When we identified Danehill, we went with Dr Percy Sykes to the UK to inspect him and he’d only taken a half-step outside his box when I just knew I had to have him.”

Q: Over the years you have been associated with some wonderful horses. Who would be some of the most memorable horses you have bred at Arrowfield?
A: “I’m very proud of all 41 Gr.1 winners we’ve bred so far, but four we’ve also raced with good friends stand out for me; Flying Spur, a gorgeous colt and then a wonderful sire; Alverta, passed in as a yearling, she was trained by my son Paul to win the Coolmore Classic and then gave us a big thrill when third in the July Cup; and, of course, Champion 2YO and Champion 3YO filly Miss Finland and her daughter Stay With Me.”

Q: What was your main goal when you first set up the Arrowfield Group and what do you think has made it so successful?
A: “My main goal was to make Arrowfield a leading Aussie-owned farm with a global perspective. We have had some success because we have stayed on message in a disciplined way from the start. We have always been most analytical, this comes from my financial background, I think. “I have also gathered a very loyal and competent team at head office and at the farm, that’s been a critical aspect. Notably, many of today’s industry leaders have cut their teeth at Arrowfield during the past 20 or 30 years and it’s very satisfying to see them do well and make their own contributions to thoroughbred breeding and racing. My wife Kristine has also been a great partner and supporter.”

Q: So when and how did you meet Kristine?
A: “I actually met Kris on a blind date set up for me by one of my uni mates, on my return to Sydney from Geneva. We married after a very short engagement. I was worried she would change her mind! We have been married for 43 years.”

Q: You have four children together, do any other than Paul work for Arrowfield?
A: “As it so happens, our four children are all involved in different walks of life. Paul is the only one working in the business; Louise is a medical doctor; Michael is a fund manager (and also on the Arrowfield board) and Susanne is a reporter and producer for Channel 9. We now have six grandchildren as well and they are a lot of fun.”

Q: Who would you say has inspired you the most within the racing industry?
A: “Robert Sangster was a true pioneer, he played a major role in developing today’s international approach to racing and breeding and I have always admired him for that. Percy Sykes, the great vet and a close friend and mentor, had X-ray vision when it came to horses. I learned so much from him.”

Q: I’m sure in-between Arrowfield and your other racing board commitments you don’t get much spare time, but do you have any interests that you enjoy?
A: “Not many, other than my family, catching up with friends, the odd spot of fishing and the occasional movie. I genuinely enjoy following all the Arrowfield-sired runners and graduates, as well as our own racehorses, and I am very happy to watch Sky Racing on a Saturday afternoon.”

Q: What do you think it is about racing that people enjoy so much? A: “I think it’s the challenge of it all, so many elements contribute to winning a race, and that dream of having a champion.” Q: What does the future hold for Arrowfield?
A: “The future for us here is to try and keep raising the bar and make it rewarding and enjoyable for all concerned, clients and our staff.”

Q: Do you have any advice for a young person wanting to be involved in the racing industry, in particular the breeding side?
A: “It really is a tough gig. You need both more capital, and more patience than you think, and you have to be in exactly the right place when that vital piece of good luck arrives. Marcus Oldham College and the Darley Flying Start program provide excellent training, and working with a sales company can be a good place to start a thoroughbred industry career.”

Q: How would John Messara best like to be remembered?
A: “Professionally, as someone who was passionate about thoroughbred racing and breeding and made a contribution to the modernisation of the industry and personally, as a good husband, father and friend.” n