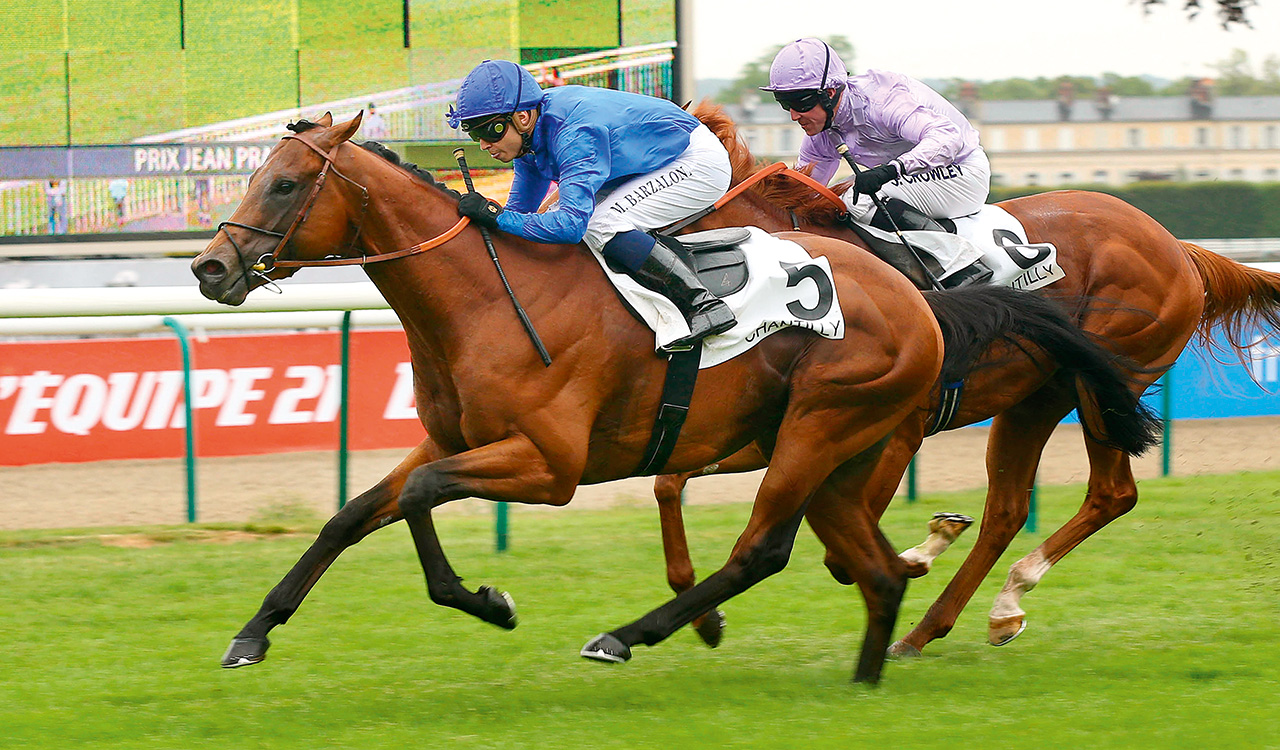 THE Prix Jean Prat-Gr.1 (1600m) winner and English 2000 Guineas-Gr.1 runner-up Territories (Invincible Spirit (IRE)-Taranto by Machiavellian) has a pedigree with lots in common to Danehill (USA). He’s by a Danzig-line sire and his dam sire Machiavellian is inbred to Almahmoud via daughters Cosmah and Natalma who appear 2×2 in the pedigree of his dam Coup de Folie. Danehill is by Danzig and carries Natalma 3mx3f.

We know Machiavellian well here, firstly, though the likes of Vettori (IRE) and then via Street Cry and his sons. The latter have worked well with the Danehill line, dual Gr.1 winner Hallowed Crown being a prime example. Invincible Spirit (Green Desert-Rafha by Kris), a former shuttler is no stranger either, particularly as his Yarraman Park-based son I Am Invincible (ex Cannarelle by Canny Lad) is acknowledged as one of our best sires with Gr.1 winners like Brazen Beau and I Am A Star (4fx4m Kris). Territories was in the first three in 10 of 13 starts for earnings of £525,096 and was never out of the money in four starts at two, winning a 1200m maiden at Chantilly after a first up third.

He was also third in the Prix de la Rochette-Gr.3 (1400m) behind Full Mast and then struck trouble when runner-up to that horse in the roughly run Prix Jean-Luc Lagardere-Gr.1 at Longchamp (Gleneagles demoted from second to third). He was first or second in four of five starts at three, starting the season with a win in the Prix du Fontainbleau-Gr.3 (1600m) at Longchamp for trainer Andre Fabre.

He was a fast-closing second to Gleneagles next time out in the English 2000 Guineas-Gr.1 on May 2, 2015 and next appeared on July 12 at Chantilly where he beat a quality field in the Prix Jean Prat-Gr.1 (1600m), running 1:36.12 on a good track, the second fastest time ever recorded for the event.

He struck a very soft surface next time out in the Prix Jacques le Marois-Gr.1 (1600m) at Deauville when runner-up to his stable mate Esoterique. Unplaced in the Queen Elizabeth II Stakes-Gr.1 at Royal Ascot, he was then third to Esoterique in the Prix du Palais-Royale-Gr.3 (1400m), on a soft track in a Gr.3, third in the Prix Messidor-Gr.3 behind Vadamos at Maisons-Laffitte and retired after a sixth in the Prix du Pin-Gr.3 at Chantilly last September.

His World Thoroughbred Ranking in 2015 was 119. Invincible Sprit (Green Desert-Rafha by Kris) won seven races (all 6f), including two as a juvenile, and scored his most notable success in the Haydock Sprint Cup-Gr.1. His sire, a son of Danzig, won the July Cup-Gr.1 and Flying Childers-Gr.1 and the outstanding sprinter has been a hugely influential sire world-wide. Invincible Sprit’s dam, by another champion UK sire in Kris (Sharpen Up), won the French Oaks-Gr.1 and her dam Eljazzi, by the Round Table horse Artaius, is a half-sister to Gr.3 winner and 2000 Guineas and Dewhurst runner-up Pitcairn (Petingo), a successful sire whose runners included triple Gr.1 winner and sire Ela-Mana-Mou.

Pitcairn’s Gr.2-winning and Irish St Leger-Gr.1 placed brother brother Valley Forge stood the 1979 and 1980 seasons in Australia before he joined his brother at stud in Japan. Several Green Desert sons have made an impact down south including Volksraad (GB) and Desert Sun (GB) and to a lesser extent Desert Style (GB), Shinko Forest (IRE) and Desert Prince (IRE), but none left a locally bred sire son as good as Invincible Spirit did in the four seasons (2003-06) he shuttled here.

His best runner in Australia was his triple Gr.1-winning filly Yosei, but his very fast son I Am Invincible (ex Cannarelle by Canny Lad), a Gr.2 winner and Gr.1 runner-up was not far behind and he has become an outstanding young sire. There are plenty of northern stars too for Invincible Spirit and among his 98SW are Lawman, Moonlight Cloud, Mayson, Vale of York, Kingman, Shalaa (shuttling to Arrowfield) and Zebedee (shuttles to Cornerstone, SA).

Taranto, dam of Territories, won twice as a juvenile in France and is a Listed placed daughter of Champion European 2YO and dual Gr.1 winner Machiavellian. She is from the French Gr.3 winner Magna Graecia, a winner from 1800m-3000m, by champion two and three-year-old Warning (by Known Fact and from the family of Scenic) and from multiple winner Grecian Slipper, by breed shaper Sadler’s Wells. Grecian Slipper’s 10 winners also include other stakes winners Graikos (Rainbow Quest) and Parthenon (Dubai Destination) and one of her daughters, Latona (Fantastic Light), a winner at 2600m in France, is dam of Sandown Guineas-Gr.2 winner Paximadia (Commands).

Grecian Slipper is a half-sister to champion sire Street Cry (IRE) (Machiavellian) and his stakes placed sister Helsinki (dam of Shamardal) and they are from Irish Oaks-Gr.1 winner Helen Street, who was among the best of her age in Europe at two and three and is a daughter of short-lived English/Irish Derby hero Troy (Petingo-La Milo by Hornbeam), and the Gr.3 winner Waterway (Riverman-Boulevard by Pall Mall), family 1l.

This pedigree relationship between the dam of Territories, Street Cry and the dam of Shamardal (Giant’s Causeway) could make for some very interesting matings indeed when Territories arrives at Darley’s Kelvinside, at Aberdeen in the Hunter Valley, in the new season. “Frosted and Territories were elite racehorses and we are thrilled to have them join our roster here in Australia,” Alastair Pulford, head of sales for Darley stallions in Australia said.

“Frosted’s Gr.1 wins came in races won by some of the greats. The names you see in pedigrees. He is the best son of a champion sire and from a stellar female line. He is a top-class prospect for Victorians. “Territories is by the sire of I Am Invincible and from the same female family as Darley’s amazing servants Street Cry and Shamardal, so there is no doubt he has the credentials to be a success at stud. He is exactly what our market will love.”