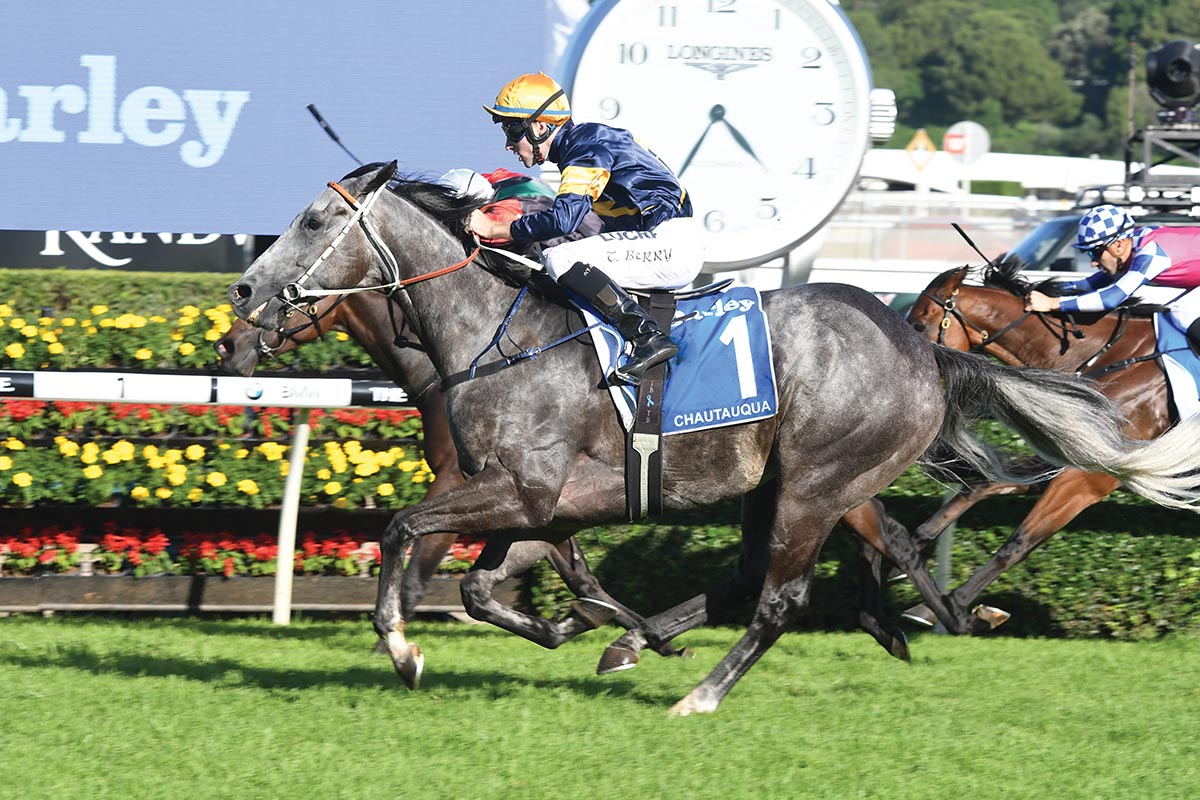 Chautauqua’s third successive win in the T.J. Smith-Gr.1 at Randwick took his prize money past $8.36m and put the spotlight on a venerable colonial thoroughbred family and one of its early champions Chester (1874). That horse is a brother to Silver Bell (1877), 14th dam of our superstar sprinter.

Chester was one of the most revered thoroughbreds produced in colonial Australia and both he and Silver Bell were by the breed shaping Yattendon, bred at Ramornie, Grafton NSW in 1861. While Silver Bell is many generations away, a lot of thoroughbred excellence has flowed through this family in the 130 plus years before it reached the gallant grey gelding Chautauqua, a son of champion sire Encosta de Lago. He’s now winner of 13 (six Gr.1 including one in Hong Kong) of his 28 starts (seven seconds, four thirds) and has record earnings for a local sprinter.

This tale begins with the importation at three in 1873 by Edward King Cox (1829-1883), owner of the Fernhill Stud at Mulgoa in Hawkesbury river country, of Lady Chester (GB), a daughter of Stockwell. This horse was a 2000 Guineas and St Leger winner who went on to be so successful as a sire he was regarded as “The Emperor of Stallions”. Lady Chester’s dam Austrey by Harkaway is a half-sister to Ascot Stakes winner Buckthorn (family 8k).

The first foal bred by Cox, a man called “The King of Thoroughbred Breeders,” using Lady Chester was the indomitable Chester. After racing four times at two in the ownership of his breeder, a campaign which saw him win three races at Randwick in a space of five days in the autumn of 1877, the Champagne Stakes (Monday), Breeders’ Plate (Wednesday) and Sires’ Produce Stakes (Friday), he was sold to James White, another giant among the pioneers of Australian breeding and racing. Chester went on to compile a career record of 19 wins, ranging from 1000m to 4800m, in 29 appearances.

Retired to White’s Kirkham Stud at Cobbity in the Camden district and deceased at 17, Chester supplied a long list of good horses, including a superstar in home bred and raced Abercorn (1884), a performer who defeated Carbine on at least three occasions. A showy chestnut, Abercorn competed in 35 races and was successful in 21, one of them a dead-heat. Among his best wins were the Sires’ Produce Stakes, Derby, St Leger, Craven Plate, Spring Stakes, Colin Stephen Stakes and Metropolitan in Sydney and the Sires’ Produce Stakes, St Leger and Melbourne Stakes in Melbourne. Abercorn sired some good winners from use alongside Chester at Kirkham, but apparently did little when shipped off to England at 14.

Returning to the family spearheaded by Chester, a horse who had four brothers sire winners, it is one that has survived through his sister Silver Bell, ancestress of Chautauqua, and half-sister Lady Granville, a mare by an E.K. Cox importation Chandos (GB) who is ancestress of Zoustar, a dual Gr.1-winning sprinter confidentially expected to be a very good sire when his first two year-olds start racing in 2017-18.

The best from the Silver Bell line of this family, until the emergence of Chautauqua, was from the branch of her family established by the terrific producer Miss Valeica (Valognes (GB)), dam of the Gr.1 stars Leica Show and her half-brother Leica Lover. Chatauqua’s dam Lovely Jubly was a star juvenile bred in Queensland using the Danehill sire Lion Hunter and Jaboulet (NZ), a Vice Regal (USA) product who won in Brisbane and Sydney at two and she is a descendant of Silver Bell’s daughter Campanillia (Maribyrnong). Her daughter Campania (Robinson Crusoe) foaled Miss Delaval (Seaton Delaval (GB) in NZ and the family remained there for several generations until Jaboulet’s importation to Australia. Miss Delaval, a multiple classic winner in NZ, is also seventh dam of Miss Valeica, although this branch came back “home” much sooner with the importation of Miss Delaval’s daughter Natalia (NZ) (Hotchkiss (NZ)).

Lucky Beggar was bred on the Widden Stud, Hunter Valley and Dewey on neighbouring Oakleigh Stud, as very likely was his sister Cushla, ninth dam of Zoustar (2010), a son of brilliant but short-lived sire Northern Meteor (like Chautauqua by Encosta de Lago). Zoustar is out of the Redoute’s Choice mare Zouzou (ex Meteor Mist by Star Shower) and he won six of nine starts, including two majors, the ATC Golden Rose-Gr.1 and VRC Ascot Vale (Coolmore Stud) Stakes-Gr.1 and was runner-up in the J.J. Atkins-Gr.1. He also counted the BRC Sires’ Produce-Gr.2 and Roman Consul-Gr.2 among his wins. Alternating yearly on the roster at Widden Stud and Woodside Park, Tylden, Victoria, use in which he has been supported by 184 mares (2014), 158 (2015) and 181 (2016), Zoustar is closely related to Testashadow (Testa Rossa, won GCTC Magic Millions Cup, second Magic Millions Guineas, third ATC Ajax Stakes, Liverpool City Cup) and to Dusty Star (General Nediym, won MRC D’Urban Stakes-Gr.2)

Chautauqua had won of 13 races (six Gr.1) in 26 starts to early April and had prize money in excess of $8.3m, the most money ever for an Australian sprinter, and the title of 2016 World Thoroughbred Ranking Leading Sprinter of 2016. His dam Lovely Jubly was the third top filly of the 2001-02 Australasian 2YO Classification and winner of seven races including two Gr.1, the QTC Sires’ Produce Stakes and T.J. Smith Classic, and also the Gold Coast Magic Millions 2YO Classic-RL for the Throsby family, whose Throsby Racing Syndicate shares in the ownership of Chautauqua with several others.

He looks the best descendant from the Silver Bell branch of Lady Granville’s family, although there is another pretty good one in the shape of VRC Oaks-Gr.1 winner Leica Show (Showdown (GB)-Miss Valeica by Valognes (GB), a foal of 1971 who has Silver Bell as her 11th dam. Leica Show, dam of Gr.1 winner Leica Planet, was one of several top class performers produced by her dam including the WATC Derby-Gr.1 hero Leica Lover and Adelaide Guineas winner Grigio, while Miss Valeica’s other descendants included the VRC Derby/Spring Champion Stakes winner and sire Nothin’ Leica Dane (Danehill), his Gr.2-winning three-quarter brother Duelled (Redoute’s Choice) and their half-sister, the Listed winner and Gr.1 second Thrilling Day (Prego (IRE)), who had stud success in Japan. This is also the family of Gr.1 winners Leica Smile and Redding and stakes winners Éclair Mystic, Dansino, Zagreb, Moon Dragon, Niblick, Heptonstall, Delbrae and Beirut.

Chautauqua, a half-brother to London Lolly (Charge Forward filly, 12 starts, winner Gr.3 Adelaide, Listed Melbourne), their dam Lovely Jubly and to a lesser extent her half-brother Sir Howard, an Alannon Gr.2 and Gr.3 winner in NZ and Gr.1 third, have added further lustre to Silver Bell. Another quality performer from this branch is (My) Royal Dell, a winner of 10 races in NZ to Gr.2, second Wellington Cup and third New Zealand Cup.

Now six, Chautauqua was bred by Woodbury Pty Ltd, a breeding operation at Woodbury on the eastern outskirts of Maitland under the management of Edwina Throsby. It was established by her now-deceased father David Throsby, a major abattoir operator and prominent for many years in the Hunter Valley and neighbouring Central Coast as a racehorse owner and trainer, including at one time having a block of stables opposite the Gosford racecourse. Probably David’s greatest joy in his long association with racing was as owner of the Carnation Lodge, Queensland bred Lovely Jubly, a filly who cost him $36,000 at the 2001 Magic Millions Gold Coast Yearling Sale.

Lovely Jubly was retained for Woodbury after being passed in at $720,000/$1m when offered as an untested broodmare at the Gold Coast. Since then she has produced 10 foals under Edwina Throsby’s management, eight have raced and seven are winners, including Chautauqua, London Lolly and Cravings. The latter, an older brother to Chautauqua, won two races in Sydney at two and finished fourth twice in Listed races.

She delivered foals in 2014 (yet to be tried More Than Ready (USA) two year-old filly) and a brother to him in 2016. In addition to Lovely Jubly, the Throsby’s are breeding from her daughters London Lolly, producer of her first foal, an Exceed and Excel filly, last season and mated with Snitzel, and Polly (2007), a Fusaichi Pegasus (USA) who lost her filly by Al Maher 2015, missed to All Too Hard and then went back to him last year. They also bred two foals from Foothill Road (2005), a Show a Heart daughter of Lovely Jubly, and then dropped her from breeding. Also retained, one of the Foothill Road foals, the I Am Invincible filly All Dior, had her first foal, a filly by the Darley sire Hallowed Crown, last September and went to Lonhro son Exosphere.

Chautauqua, like the other Throsby bred horses, was raised on Woodbury, but their dams were walked in for servicing from the Neale Bruce conducted Berkeley Park Stud, Timor Road, Blandford at the northern end of the Hunter Valley. The mares are foaled down at Berkeley Park and remain there until the foals are weaned. Trained by John Hawkes and sons for a big group of owners, including Throsby Racing Syndicate (Mgr: Ms E.R.S. Throsby), Chautauqua was passed in at $300,000/$400,000 when submitted through Berkeley Park at the 2012 Inglis Easter Yearling Sale.