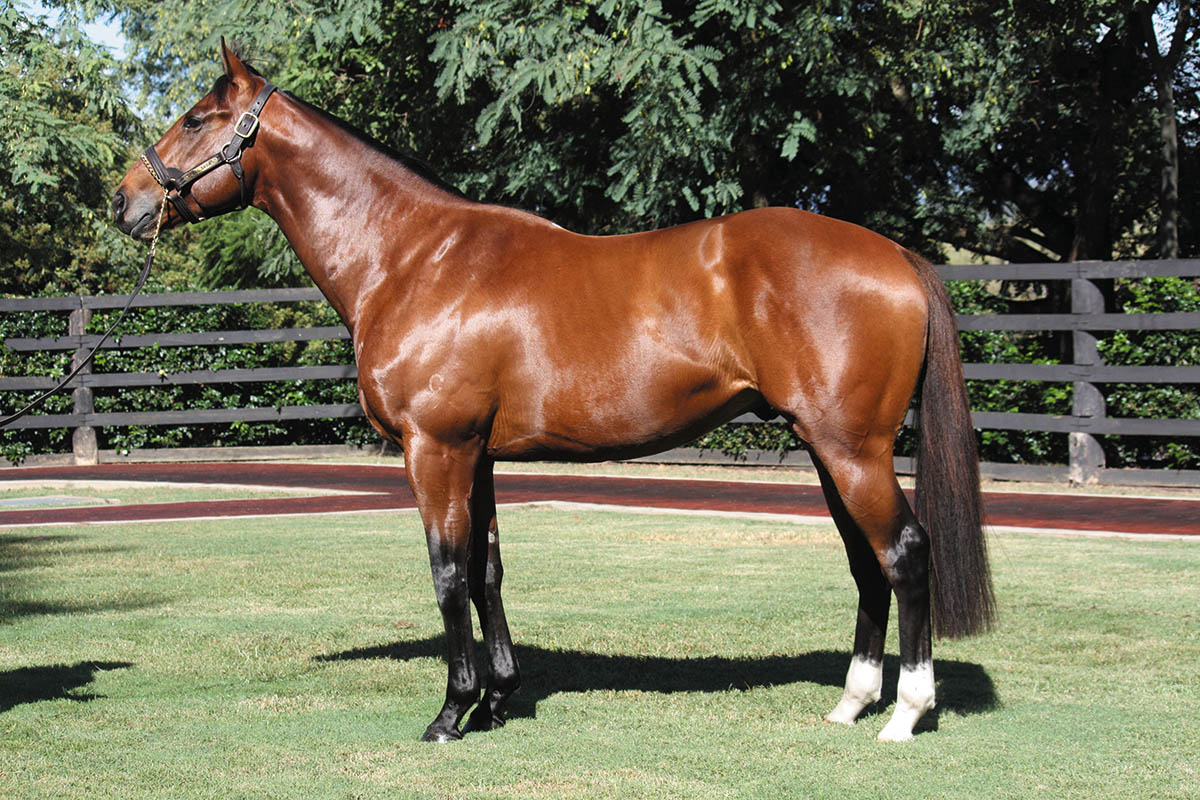 Quite a few established sires have new homes for the 2017 season including Myboycharlie, Duporth, Husson and Real Saga. The latter has moved following the decision by Glenlogan Park management not to stand stallions in future, although the stud’s grand old men Show a Heart (20) and Falvelon (21) will live out their days at the Innisplain property and be available to serve the occasional walk-on mare.

Todman Stakes-Gr.2 winner Real Saga (Tale of the Cat (USA)-Windy Kate by Air Express (IRE)), who retired to stud in 2009, is now at Scott McAlpine’s Eureka Stud, while his former barn mates Rothesay and Jet Spur move to Lyndhurst Stud and Grandview Stud respectively. The Danehill Stakes-Gr.2 winner and Caulfield Guineas-Gr.1 runner-up Rich Enuff (Written Tycoon-Hotnuff by Spartacus) will now stand at Woodside Park in Victoria exclusively after the two studs stood him in a joint venture last year. He stood at Glenlogan in 2016 on $13,750 and covered 124 mares. Glenlogan will retain its share of ownership in all four horses.

“This is something we have been angling towards for a number of years and now seemed like the ideal time to make the transition,” Glenlogan principal Jon Haseler said. “Our focus will be on producing the very best yearlings and racehorses we can and presenting them all around the country.”

“We are very proud of what our stallions have achieved over a long period of time,” Glenlogan’s general manager Steve Morley said. “The influence they have had, and continue to have, on racing up here is almost unparalleled when they are considered as an entire group.”

Queensland Guineas-Gr.2 winner Rothesay (Fastnet Rock-Schiaparelli by Woodman (USA)) was the leading sire of three year-olds in Queensland with his first crop runners in 2015-2016, a title won the previous season by the Blue Diamond-Gr.1 runner-up Real Saga, whose four wins also included the Breeders’ Plate-LR and Blue Diamond Prelude-Gr.3 (beating Reward for Effort and Starspangledbanner). Rothesay is the sire of stakes winner Too Good To Refuse and stakes placed Havasay and In His Stride and has 50 winners of more than $2m so far this season to be 55th on the sires’ list by earnings.

Real Saga, a three-time Champion Queensland 2YO Sire, will stand at $9900, and his runners include Magic Millions 2YO Classic-RL winner Real Surreal and Adrian Knox Stakes-Gr.3 winner Candelara among winners of more than $10m. His dam sire, the Queen Elizabeth II Stakes-Gr.1 winner Air Express (Salse), shuttled to Eureka and Semipalatinsk (USA) (Nodouble), sire of his second dam Kate Be Good, was a long-time Eureka Stud sire and many times Champion Qld-based Sire.

Caulfield Sprint-Gr.2 winner Jet Spur (Flying Spur-Verocative by Bletchingly) has proved a wonderful winner getter since retiring to stud in 2006 and was runner-up to Show a Heart for the QTIS juvenile sire crown in 2016. The sire of 60 winners of more than $1.6m so far this season, including $232,000 earner Siegfried, joins the Breeders’ Plate winner Whittington at the Grandview property at Peak Crossing in southeast Queensland. Jet Spur’s best runners include the Gr.3 winner Mishani Honcho and other stakes winners Belle d’Amour, Biggles, Black Hat, Emmalene, Fixation and Tina Melina.

Husson andGolden Orange
UNBEATEN Champion Argentine 2YO and Miler Husson (ARG) (Hussonet (USA)-Villa Elisa by Roy), sire of 59 winners of $3.7m so far this season, joins the Aquis roster from Vinery. He retired to stud in 2006 and has more than 170 winners including dual Gr.1 winner Lucky Hussler, this season’s Golden Slipper-Gr.1 runner-up Frolic and unbeaten HK three year-old Nothinglikemore.

The sire of 11 stakes winners and with progeny earnings topping $18m, his fee remains at $13,200 on the growing roster at the Fung family’s Aquis Farm at Canungra. Among those who will join him in 2017 is HK Gr.1 winner Sweet Orange (USA) (War Front (USA)-Good Vibes by Unbridled’s Song (USA)), who stood the past three seasons at Highview Stud in NZ and whose sire, a son of breed shaper Danzig, commands a $250,000 fee in the US.

Coolmore shuttled War Front son Declaration of War and has another son, triple Gr.1 winner Air Force Blue (fee $16,500), on its Hunter Valley roster in 2017, while multiple Gr.1 winner and proven young sire of runners up to Gr.1 level The Factor (fee $11,000) shuttles to Newgate, all of which makes Sweet Orange’s $4400 fee very appealing indeed, considering his four wins included the Hong Kong Classic Mile-HKGr.1 and a 1400m event at Sha Tin. He won two of four starts in Ireland up to Listed level at two and was second in the others, including behind Dubai Prince in the Killavullan Stakes-Gr.3. His placings in HK included a third in the Queen Elizabeth II Cup-Gr.1 behind Rulership in 2012, a year he was given a World Thoroughbred Ranking of 116. His brother, Intelligence Cross, was a Gr.3 winner at two in Ireland in 2016 and was also fourth in the Middle Park Stakes-Gr.1 and they are from the family of triple Gr.1 winner Crimplene (Lion Cavern).

Duporth
THE Lamont family’s Kooringal Stud at Wagga is the new home for BTC Cup-Gr.1 winner Duporth (Red Ransom (USA)-Staging by Success Express (USA)) following the sale of Brett Cavanough’s Jindera Park near Albury as the successful trainer moves to Scone to continue his career. Among five winners from his Gr.2-winning dam, the others including Gr.1 winner Excites (Danewin) and Gr.2 winner Tickets (Redoute’s Choice), both also sires), Duporth has sired more than 100 winners of $10m including current three year-old star Hey Doc, winner of the VRC Australian Guineas-Gr.1 this season.

Duporth is also sire of black type winners Dashing Fellow and Ruettiger and stakes placed Cornrow, Inkling and Two Over One (Wingold in HK). His 2017 fee is $7700 and he stands alongside Krupt, Magic Albert, Zariz and The Brothers War (USA), the latter a stakes winning son of earlier-mentioned War Front and the Gr.2 winner Moon Queen (Sadler’s Wells).

Va Pensiero
THE sale of Jindera Park has also meant the relocation of young sire Va Pensiero (Stratum-Rosmarino by Langfuhr (CAN)) to the Pendergast family’s Riverdene Stud at Wagga Wagga where the dual Gr.3 winner will command a second season fee of $6600. He will stand alongside Kaphero and Strada.

A winner over 1000m at Warwick Farm at two and a son of Golden Slipper-Gr.1 winner and successful sire Stratum (Redoute’s Choice), whose multiple Gr.1 winner Stratum Star takes his deceased sire’s place on the roster at Widden Stud in 2017, Va Pensiero trainedon to be amongst the best of his age at three. He beat Cluster and Windjammer in the San Domenico Stakes-Gr.3 (1100m) at Rosehill and Gr.1 winner Dissident in the Run to the Rose-Gr.3. At four he was runner-up to Gr.1 winner Miracles of Life in the ATC Challenge Stakes-Gr.2 (1000m) at Randwick, beating Rubick.

His city-winning dam won five races and his stakes placed second dam, Amaia, is a daughter of champion sprinter and sire Bletchingly (Biscay) and a sister to Todman Slipper Trial-Gr.2 winner and sire Mercury. Their dam is Flight Stakes-Gr.2 winner Gelsomino (Zamazaan (FR)) and it’s a family nurtured by Sir Tristan Antico when he owned Baramul Stud. 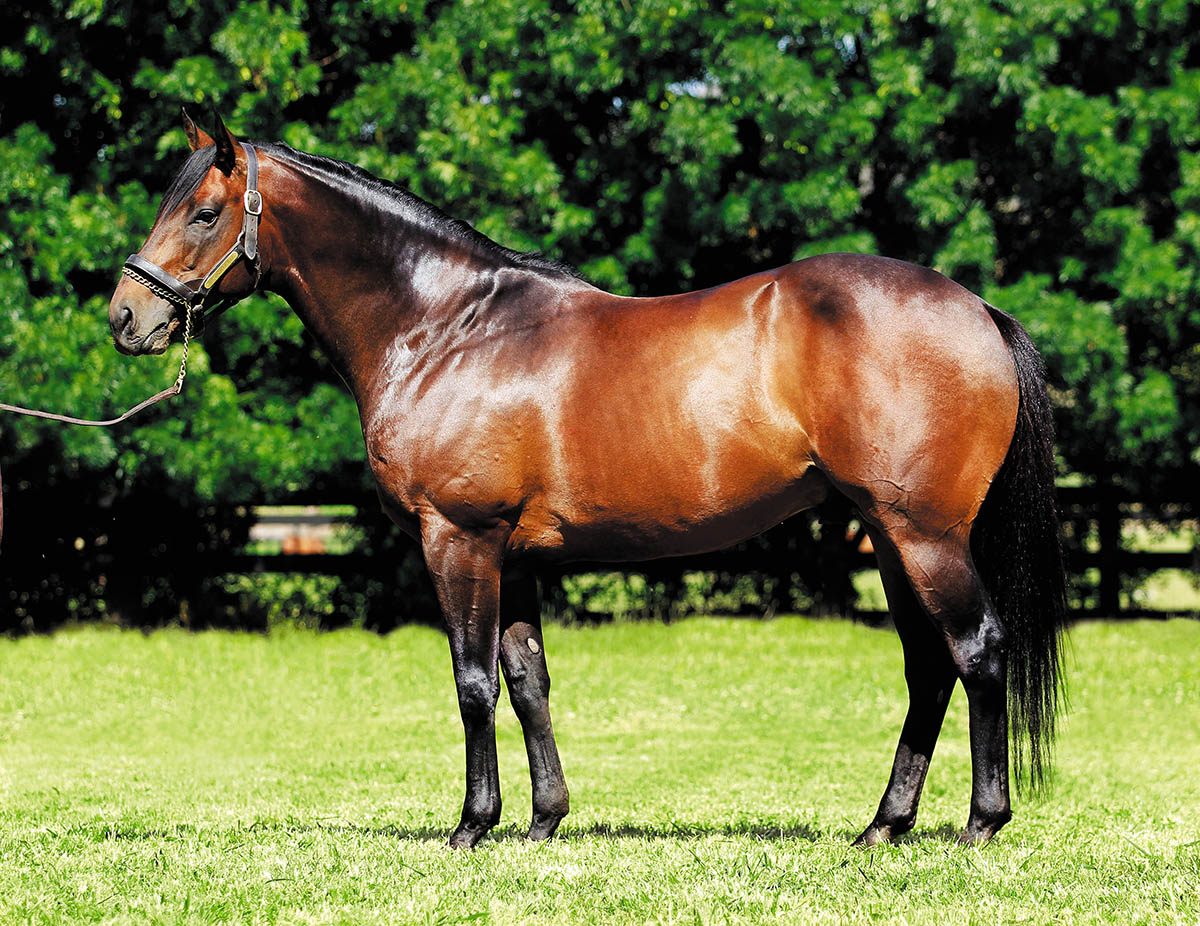 Myboycharlie (IRE)
THE Prix Morny-Gr.1 winner and proven sire Myboycharlie, a grandson of Danehill (USA), moves from Vinery to John North’s Bowness Stud near Young just as another good runner by him has appeared in Europe in the shape of Prix Penelope-Gr.3 winner Sistercharlie. Her win in the 2100m Saint-Cloud feature puts her on track for either the Prix Saint Alary-Gr.1 this month or the Prix de Diane-Gr.1 (French Oaks) in June.

Out of a daughter of Galileo, she is the 15th stakes winner for Myboycharlie ((Danetime-Dulceata by Rousillon) who has been in the news locally this season thanks to the deeds of his four year-old daughter Jameka, winner of the Caulfield Cup-Gr.1 and BMW-Gr.1 after claiming the VRC Oaks-Gr.1 in 2015. His other notable runners here include ATC Sires’ Produce-Gr.1 winner Peggy Jean, Charlie Boy, Blueberry Hill and Zelady’s Night Out. His northern runners also include Gr.1 winner Euro Charline.

“We are pleased to be adding a stallion of Myboycharlie’s calibre to our roster and he should appeal to breeders in our area because of his ability to produce two and three year-old runners suitable for the BOBS Scheme as well as horses like Jameka, the best home-grown stayer in Australia,” John North said. North pointed out Myboycharlie’s success with mares carrying the blood of brothers Fairy King and Sadler’s Wells and urged mare owners to consider this nick when planning their matings.

Myboycharlie, who was the leading sire of juveniles by earnings and by winners in France in 2016 and has more than 250 winners worldwide, will stand at $8800. His stud mates are Bon Hoffa, Bullet Train (GB) and Walking or Dancing. The success of Jameka had propelled him to 15th on the general sires’ list in late April with 51 winners (70 wins) of more than $4.88m.

Charge Forward
PROVEN Gr.1 sire Charge Forward (Red Ransom (USA)-Sydney’s Dream by Bletchingly) will move from Arrowfield to Tim and Celie Nolan’s Murrulla Stud at Wingen just north of Scone after his sale to the Esplin family (Tartan Fields) who raced the horse. The sire of about 250 winners, including Gr.1 winners Response and Headway, is also broodmare sire of this season’s Golden Slipper-Gr.1 winner She Will Reign.

“We stand Office Bearer on behalf of the Esplins and when Arrowfield offered the opportunity to stand a Gr.1 producing stallion like Charge Forward we quickly ageed,” Tim said. “He’s all about precocious speed, having won The Galaxy-Gr.1 at three after winning the Todman Slipper-Gr.2 and Breeders’ Plate-LR at two when he was also runner-up in the Golden Slipper-Gr.1 to Dance Hero.”
Charge Forward also defeated Fastnet Rock and Dance Hero in the San Domenico Stakes-Gr.2 (1000m) at Randwick at three. He retired with four wins, two seconds and two thirds in 11 starts for earnings of $1.2m. His sire was an international success and his Gr.1-winning dam is a daughter of champion sire Bletchingly and the noted producer Dream Appeal (USA) (Valid Appeal). He will stand at $8800.

“We have always loved him since the day John O’Shea bought him for us at the Magic Millions and we kept a share in him when he retired to stud,” Hamish Esplin said. “He can produce colts and fillies and his daughters look to be very valuable broodmares of the furure.”n