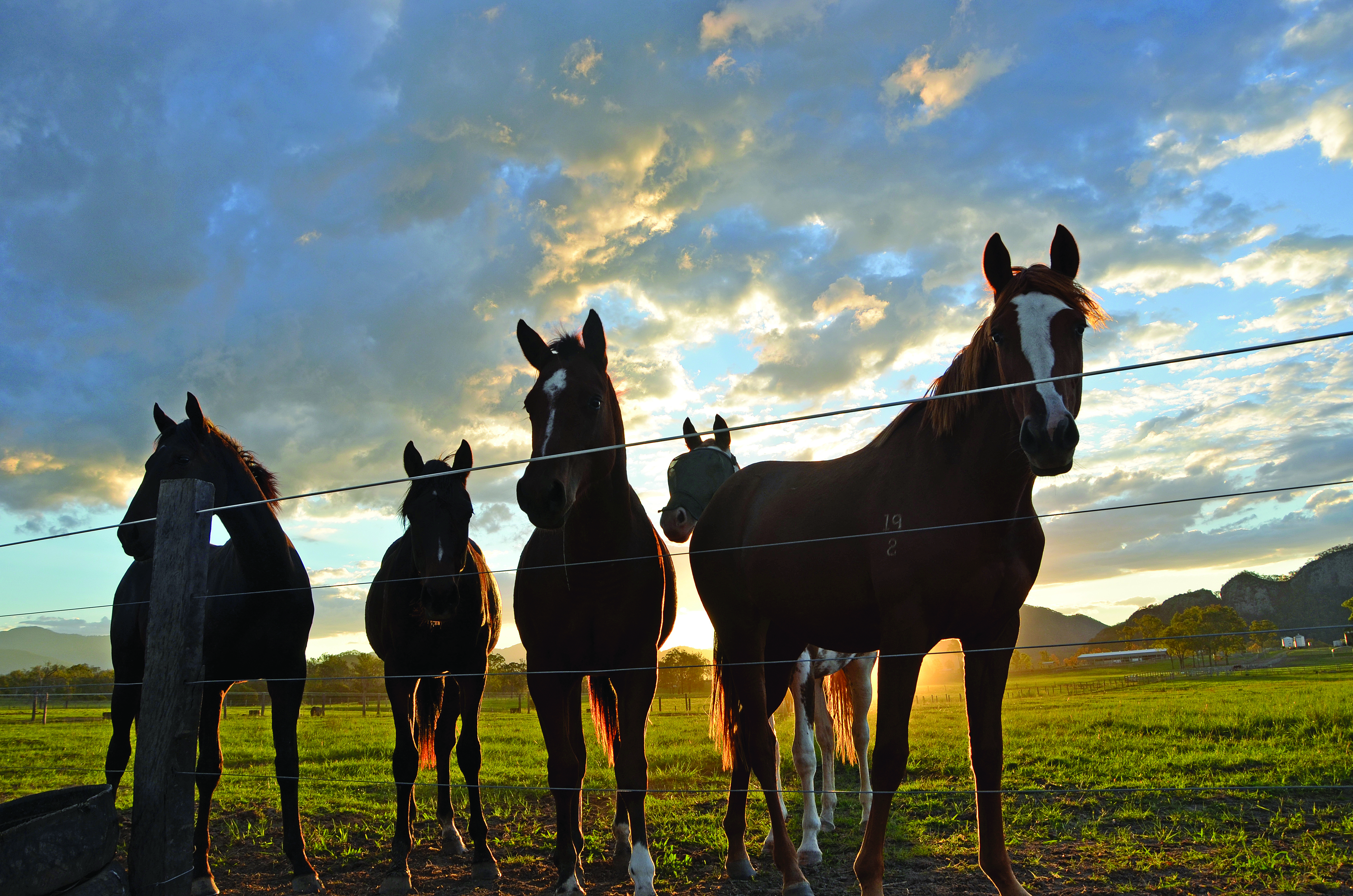 The Minto Crags stand tall over picturesque Lucas Bloodstock, a stud farm built up over seven years by Ben and Alena Lucas from an empty paddock to the leading equine complex (one which is located just 90 minutes from Brisbane, Toowoomba and the Gold Coast) that it is today.

A variety of paddocks to suit stallions, broodmares, foals and spellers are in place along with stables with a separate sanitary veterinary area and a serving barn. Broodmares are well catered for with expectant mares under 24 hour foal watch whilst all breeding services (including weaning, early education and fostering) are offered. The property has been customed designed by the Lucas family with the health and well-being of horses at the forefront.
Great pride and care is taking in sales preparation as reflected by excellent results at the recent Magic Millions with Lucas Bloodstock’s four yearlings selling for $180,000 (an I Am Invincible filly to Bjorn Baker), $200,000 (a Brazen Beau filly to Sun Bloodstock), $220,000 (a Dissident colt to OnTrack Thoroughbreds) and $400,000 (a Dissident colt to McEvoy Mitchell Racing).
In that short time the family owned and run Lucas Bloodstock located in the world famously beautiful Scenic Rim region upstream of the Teviot River has built up not only outstanding facilities but also a good client base, one that has enabled them to be represented at the Inglis Australian Easter Yearling Sale for the first time.
“We are very happy to have a draft at Easter so soon,” Ben Lucas said, adding that he is grateful for “the great support of our clients.”

“They are all cracking types, all strong, well balanced good walkers and we are very happy with them. It is great to have such an outstanding group of horses for our Easter debut.”

Lot 28 br.c by Snitzel from Attractive (Zabeel): bred on the same Snitzel/Zabeel cross as Group winners Time For War, Perast, Lubiton and Big Tree, he is the second live foal for a lightly raced Zabeel (dam sire of 184 stakes winners) whose first by Snitzel’s son Shamus Award fetched $185,000 at last year’s sale. Carrying multiple strains of influential matriarch Somethingroyal as well as Storm Bird and Nijinsky II crosses, he is out of a half-sister to Group One sprinter Velocitea.

Lot 47 b.c by Fastnet Rock from Blizzardly (More Than Ready): half-brother to the Magic Millions 2YO Classic-RL, 1200m and BJ McLachlan Stakes-Gr.3, 1200m winner Unencumbered out of a fast Listed winner whose sire is already doing a great job as a broodmare sire with 58 stakes winners. Bred on the same Fastnet Rock/More Than Ready cross as Group One galloper Atlante.

Lot 73 b.f by Snitzel from Cinq Rouge (Red Ransom): dam won her first two at two including the Listed 1000m contest on W.S Cox Plate Day and was close up in the Magic Millions. Her first to race is the Group Three placed Maysoor and this is the prolific black-type family that has produced the big race winners Mr Murphy and Kenvain. This Snitzel/Red Ransom combination boasts a 19.4% stakes winners to runners
strike rate.

Lot 87 br.f by I Am Invincible from Dash On Ruby (Anabaa): half-sister to the South African Champion 2YO Male Harry’s Son and the stakes placed Henry Of York out of a multiple city winning granddaughter of Group One mare Miss Clipper, dam of one of the best mares to race in South Africa in Ruby Clipper, dam of Group One sprinter Seventh Rock. Her sire and dam sire are both descendants of the influential Chelandry.

Lot 129 br.c by Redoute’s Choice from Feels Like Home (More Than Ready): first foal for a Group Three placed metropolitan winning daughter of the speedy stakes winner Danehill Smile from an international family that has produced stakes winners in Australia, Japan and South America. Of the four winners bred on the same 3mx3f cross as Danehill (via Redoute’s Choice) as this colt, two (Florentina and Burnstone) are stakes winners.

Lot 232 ch.c by Snitzel from Miss Charming (Forestry): first Australian foal for an imported winning mare whose first born is a winner in Canada. His grandam is the Group Three winner Charm A Gendarme, dam of 11 winners including the dual Group One winner Tout Charmont (dam of Group Two winner Dancing House) and Group Three galloper Forest Grove.

Lot 428 br.f by Snitzel from Vintage Strike (Smart Strike): first foal for an imported mare with lovely local connections with her dam being the Coolmore Classic-Gr.1, 1500m winner Bollinger, daughter of Golden Slipper Stakes-Gr.1, 1200m heroine Bint Marscay. Bollinger’s seven to race have all been winners including the US based triple Group winner Friesan Fire and this season’s Sandown Guineas-Gr.2, 1600m winner Villermont.

Lot 435 br.c by Medaglia d’Oro from Watchful Eyes (Street Sense): half-brother to last season’s city winner Vigilance (successful at her first four starts) out of a daughter of the Swettenham Stud Stakes-Gr.2, 1200m winner French Bid, dam of the stakes placed winners Cavalaire Bay and Forum Magnum. Hails from the consistent family of Group One winners Lachlan River, My Brilliant Star, Shot Of Thunder and Sudurka.