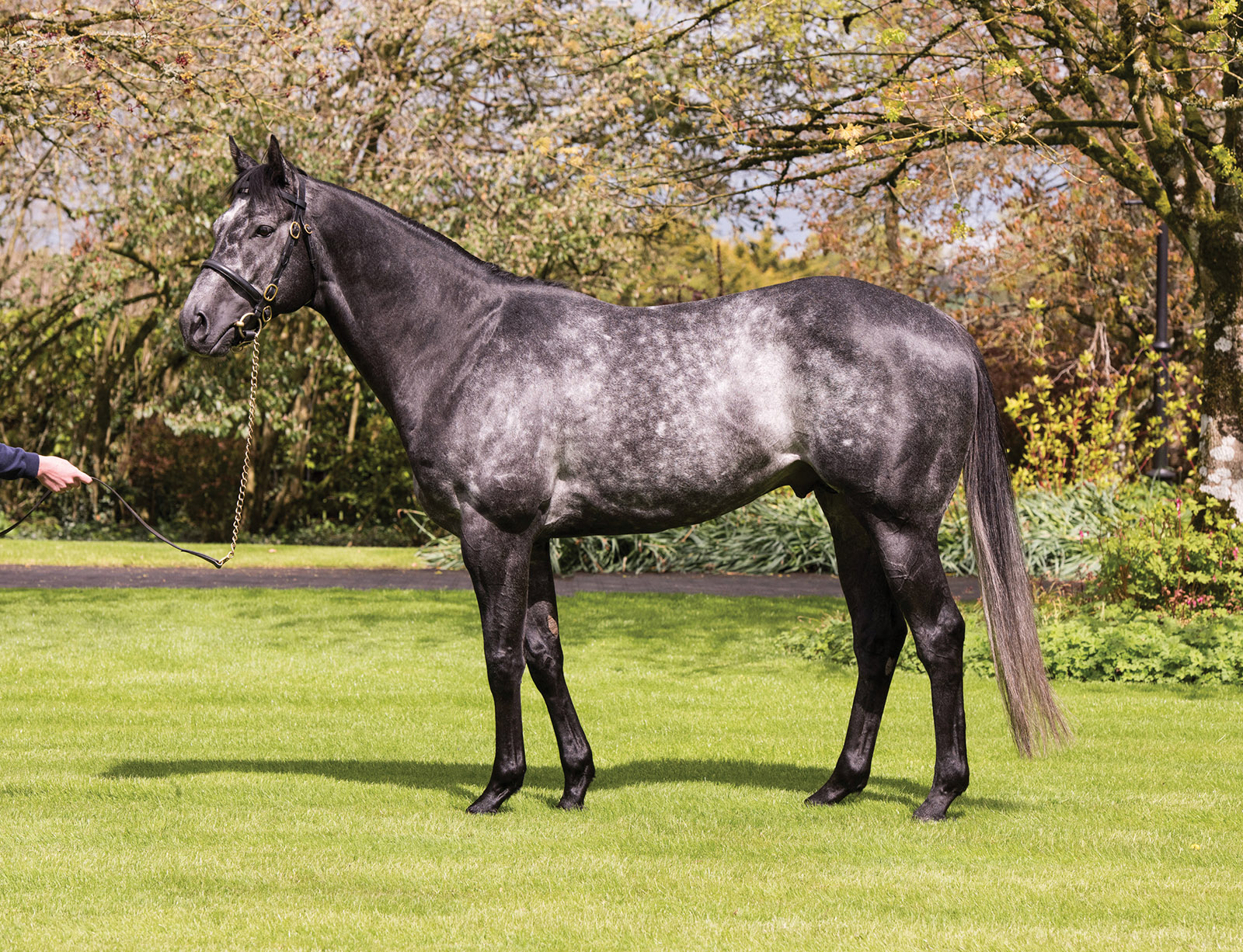 THE win of Justify in the 2018 Kentucky Derby (and subsequently completing the Triple Crown) certainly highlights the loss of his sire Scat Daddy (Johannesburg (USA)-Love Style by Mr. Prospector) in 2015, as the winner was one of his four runners in the classic. It also tells us we are lucky to have two of his sons at Coolmore, Jerrys Plains, the Prix Morny-Gr.1 winner and Breeders’ Cup Turf Sprint-Gr.1 runner-up No Nay Never (USA) (ex Cat’s Eye Witness by Elusive Quality (USA)), who has covered books topping 100, at $11,000 (rising to $19,250 this year) in the past two seasons and already has several winners in the north including stakes winner Servalan (ex Catch the Eye by Oratorio (IRE)), and the dual Gr.1-winning sprinter Caravaggio (USA) (ex Mekko Hokte by Holy Bull), whose fee is $33,000. His northern fee is €35,000 ($A55,550).

It’s a pretty rare thing for a sire to get four runners in the Kentucky Derby, the previous occurrence coming in 1923 for Chicle (FR), while the only other sire to achieve this was Enquirer, in the first Derby of 1875 and again in 1878. Although connections did think about it, there seemed little chance of Caravaggio heading on a classic path once his trainer Aidan O’Brien had declared the grey colt “the fastest we have ever had” when he was put into training at two.
He remained unbeaten in four starts as a juvenile, culminating in a four-length victory over Courage Under Fire in the Phoenix Stakes-Gr.1 at the Curragh (good to firm) before his season was curtailed though a muscle injury. His Timeform rating was 123p.

Caravaggio resumed at three in the Lacken Stakes-Gr.3 (6f) at Naas on May 21 last year, clearing out to beat Psychadelic Funk by 4.75 lengths. The race sealed his future as a sprinter, rather than a classic contender.

“He’s an unbelievably quick horse, we have never had one quicker than him at home,” Aidan O’Brien said. “There’s nothing to say he wouldn’t get a mile, the petrol gauge never shifted when we worked him over seven furlongs, but he is so quick, sprinting looks the way to go.”

Caravaggio then lined up against the best three year-old sprinters the Commonwealth Cup-Gr.1 (6f) at Royal Ascot (track good to firm). Ridden patiently, he came with a strong late run in the field of 12 to collar the leader Harry Angel and win by a length, with Blue Point a half-length back in third to take his unbeaten sequence to six. He was fourth next time out behind Harry Angel in the July Cup-Gr.1 and then sixth in the Prix Maurice de Gheest-Gr.1 at Deauville in early August.

Caravaggio returned to his best form next start when he showed all his speed to win the Flying Five-Gr.2 (5f) at the Curragh on September 10, taking the lead in the final furlong to beat stable mate Alphabet by a length on a track rated soft to heavy. The race has been promoted to Gr.1 this year. His final start was in the Champions’ Sprint-Gr.1 (6f) at Ascot on October 21 and he stayed on late when third behind Librisa Breeze and Tasleet. Harry Angel was fourth and Diamond Jubilee-Gr.1 winner The Tin Man was fifth. His annual Timeform was 126 at three (“lengthy, good bodied”) and his 2017 World Thoroughbred Ranking was 120 when he was equal top-rated three year-old sprinter in Ireland. He won seven of his 10 starts, was once third and once fourth, the placings coming in Gr.1 events.

“We were unlucky to lose his sire and hopefully this fellow will take his place,” John Magnier said after the Commonwealth Cup. “It’s a cross that we need (for mares by the likes of Sadler’s Wells and Galileo) and it’s fortunate for us that he’s come along at the right time.”

Caravaggio was one of four winners Scat Daddy had at Royal Ascot in 2017, the flying filly Lady Aurelia, Sioux Nation and Con Te Patiro were the others.

Scat Daddy won the Champagne Stakes-Gr.1 (8f) at two and Florida Derby-Gr.1 (9f) at three, when also fourth in the Kentucky Derby, and despite his own career being restricted to dirt tracks, many of his progeny showed remarkable aptitude for turf and are mostly sprinters. He is a multiple champion sire in Chile as well as being Champion Sire of 2YO in the US in 2017 (based at Coolmore’s Ashford in Kentucky).

Scat Daddy’s dam is by Mr. Prospector and second dam by Nijinsky and his sire Johannesburg (USA) (Hennessy (USA)-Myth by Ogygian), an unbeaten Champion 2YO in England, Ireland, France and the US, has a second dam by Mr. Prospector and a fourth dam by Nijinsky, the latter a horse with many pedigree similarities to Storm Bird (Northern Dancer-South Ocean by New Providence), sire of Storm Cat (sire of Hennessy).

Unbeaten Justify, the first Kentucky Derby winner not to race at two, was a $500,000 yearling and is from the Ghostzapper (Awesome Again-Baby Zip by Relaunch) mare Stage Magic. Owned by a partnership including WinStar Farm, China Horse Club and Starlight Racing and trained by Bob Baffert, he also won the Santa Anita Derby-Gr.1 and is among 25 Gr.1 winners by his sire who died at just 11 years-old.

His final two year-olds have been in huge demand at recent sales with one colt making 900,000 guineas ($US1.35m) and three further lots selling for 500,000 guineas or more at the Tattersalls Craven Breeze Up Sale in mid-April, while Coolmore’s M.V. Magnier paid $US1m for a two year-old colt in a Florida breeze-up sale in March and a two year-old filly made $US875,000 at another Florida sale the same month.

Caravaggio, bred in the US by Richard C. Imbert’s Windmill Manor Farms and Petaluma Bloodstock (Charlie O’Connor and partners) and raced by a Coolmore syndicate (Susan Magnier, Michael Tabor and Derrick Smith), is from the 2002 Delta Miss Stakes-LR winner Mekko Hokte, dam also of the Gr.2 winner My Jen (Fusaichi Pegasus). Her yearling colt of 2018 by American Pharoah (USA) cost the Coolmore team $US1m at Keeneland in January.

Mekko Hokte is a daughter of multiple Gr.1 winner, Horse of the Year and Champion 3YO Colt Holy Bull (Great Above-Sharon Brown by Al Hattab) whose 48 stakes winners included Giacomo (Kentucky Derby, dam by Stop the Music), Macho Uno (Breeders’ Cup Juvenile, Blushing Groom; sire of Qld-based sire Wicked Style), Flashy Bull (Mt Livermore by Blushing Groom) and Confessional (Frizette Stakes, Green Dancer). Holy Bull’s sire Great Above set track records for 6f at Aqueduct in 1976 and 1977 and was in the first three of 38 of his 63 starts. This tough stakes winner represents a distinctly American line of Questionnaire, while Great Above’s dam is champion sprinter Ta Wee (Intentionally-Aspidistra by Better Self), a half-sister to Dr Fager.

Holy Bull’s dam is by Al Hattab, a horse inbred 3×2 to closely bred Mah Mahal (Gainsborough-Mumtaz Mahal) and Abernant, the latter a son of Owen Tudor (by Hyperion, By Gainsborough) and Ruston Mahal (Rustom Pasha-Mumtaz Mahal by The Tetrarch).

Al Hattab’s sire The Axe (Mahmoud) has La Troienne as his third dam.Caravaggio’s second dam Aerosilver won twice at around a mile in the US and is by Relaunch (In Reality), a grandson of Intentionally. This is the man o’War male line and In Reality carries his son War Relic 3mx3f. Interestingly, Relaunch is out of Foggy Note, a daughter of The Axe. Mekko Hokte is inbred 4mx4f to The Axe, 4fx4m to Intentionally and 4mx5f to Rough’n Tumble (grandsire of Great Above and also in this pedigree via a champion 2YO daughter My Dear Girl, dam of In Reality). Mekko Hokte’s sire (Holy Bull) and dam sire (Relaunch) are closely bred indeed.

Never Again is Caravaggio’s seventh dam and dam of Gr.1 winner and sire Oil Capitol (Mahmoud) and his stakes-winning half-sister Cigar Maid (Pavot). This is a famous family (9e) in the US as Confidence is a great-granddaughter of Saint Lucre (St Serf-Fairy Gold by Bend Or).

St Lucre’s dam, the Woodcote Stakes winner Fairy Gold was at stud in the UK and imported to the US in 1903 for August Belmont II who paid 3600 guineas for her. Her sons Fair Play (Hastings) and Friar Rock (Rock Sand) made a lasting impact on the breed, the former, a stakes winner at two and three, was Leading Sire in the US in 1920, ‘24 and ‘27 and left the great Man o’War and the latter was US Horse of the Year in 1916 before retiring to stud where he left noted sire Pilate. Another son Golden Measure (Florizel) was bred in Ireland the year before his dam left for the US and he won the 1907 Ascot Gold Vase (16f) before a stud career in Ireland.

St Lucre’s Gr.1-winning daughter Zariba (Sardanaple) enjoyed major success on the track and at stud in France and England, her son Abjer (Asterus) won the Middle Park Stakes, son Goya (Tourbillon) won the Gimcrack Stakes and St James’s Place Stakes and the Prix Ganay (twice), son Goyescas (Gainsborough) won the Champion Stakes, Prix Ganay and Prix d’Ispahan, daughter Corrida (Coronach) had many wins including the Arc de Triomphe (twice) and son Coaraze (Tourbillon) counted the French Derby among his wins. St Lucre is also the second dam of Dark Legend (Dark Ronald) who ran third in the Derby before being shipped to India where he won good races. He returned to the UK and got the great stayer and sire Son-in-Law before being shipped to Germany where he became
an outstanding sire.

Caravaggio’s branch of the family stems from St Lucre’s daughter Lisette IX (Mordant) via her daughter Listen In (Rabelais) and then to her daughter Confidence. This is also the family of Nolhome’s stakes winner and sire General Holme and Irish 1000 Guineas winner Al Bahathri (Blushing Groom), dam of 2000 Guineas-Gr.1 winner Haafhd (Alhaarth).

The Woodcote Stakes (6f three yards, 1210m) for juveniles, inaugurated at Epsom in 1794, has been won by some pretty good horses over the decades including Ladas, Sceptre, The Tetrarch, My Babu and My Swallow, so Fairy Gold, who won in 1898 (beating Desmond) is in pretty good company.

She’s way back in the pedigree of Caravaggio as his 12th dam, but the excellence of her genes and the speed she displayed has found perfect expression in her modern day descendant.