Every weekday morning, in driving my children to school, I pass by a local landmark in the suburb of Kirkham, near Camden in southwest Sydney. It’s a set of horse stables, brightly white in colour and featuring a series of ornate-looking arches.

The surrounding yards hold a few horses, perhaps an agistment facility for jumpers or recreational riders. It’s one of those places that’s still ticking over but also gives the impression it was much grander and significant in its heyday.

Earlier this year, I decided to do something about my daily curiosity and research the story of the white stables and it turns out my morning friend has quite a history. It’s the Kirkham Stud, established in 1816 by the surveyor-explorer John Oxley (1785-1828), as part of extensive land grants he received in the Camden and Cobbitty districts from Governor Macquarie.

The stud was named after Oxley’s birthplace: Kirkham Abbey in Yorkshire, England. Its heritage-listed stables are believed to be the oldest structure of their kind surviving in NSW. In 1830, following Oxley’s death, his business partner, former Navy Captain John Coghill, managed the farm. Coghill imported the British thoroughbred stallion Bachelor (1837) to stand at Kirkham. In 1845, John Oxley Jnr took over the property, aged just 21, but failed to advance the family’s racing interests.

The golden era at Kirkham occurred during the last three decades of the 1800s, following the farm’s purchase by James White (1828-1890). He was a wealthy pastoralist, a NSW parliamentarian (in the Legislative Assembly 1864-68 and Legislative Council 1874-1890) and long-serving member of the AJC committee, including two terms as AJC Chairman (1880 and 1883-90).

White was one of Australia’s greatest-ever owners of racehorses, also establishing commercial farms in the Hunter Valley including the famous Segenhoe Stud. In 1878 he purchased the Newmarket stables at Randwick, where he is thought to be responsible for building, or at least lavishly enlarging, the historic Big Stable. Today Newmarket houses the Inglis auctioneers and sale yards.

Among the sires White stood at Kirkham were the Melbourne Cup winners Chester (1874, Yattendon-Lady Chester by Stockwell) and Martini Henry (1880, Musket-Sylvia by Fisherman-Juliet by Touchstone). He purchased Chester as a two year-old from his breeder Edward King Cox, of the Fernhill Stud at Mulgoa, near Penrith, the horse having won the AJC Sires’ Produce Stakes. Chester went on to win the Victorian Derby-Melbourne Cup double in 1877 (trained by the legendary Etienne de Mestre), a feat repeated by Martini Henry six years later.

White reputedly won enough money backing the Chester double to fund the establishment of his Kirkham breeding operation. He also heavily backed the Martini Henry double in 1883, winning £25,000, millions in today’s money. Most horse owners dream of winning either the Cup or the Derby during the Melbourne Spring Carnival, yet White was able to win the double twice.

Chester is buried in the south-western corner of the Kirkham property, his tombstone reading, rather plainly: Chester, Died 21st November 1891. He was a highly successful stallion with his best son being Abercorn (1884, ex Cinnamon by Goldsbrough, another son of Sylvia). Raced by White, Abercorn won the 1887 AJC Derby and 17 other stakes races. He is best remembered for defeating the mighty Carbine three times at weight-for-age.

Chester sired 26 stakes winners and was Australia’s leading sire on four occasions. Martini Henry sired 15 stakes winners. These are tremendous achievements but only one part of James White’s dominance of racing during this period. 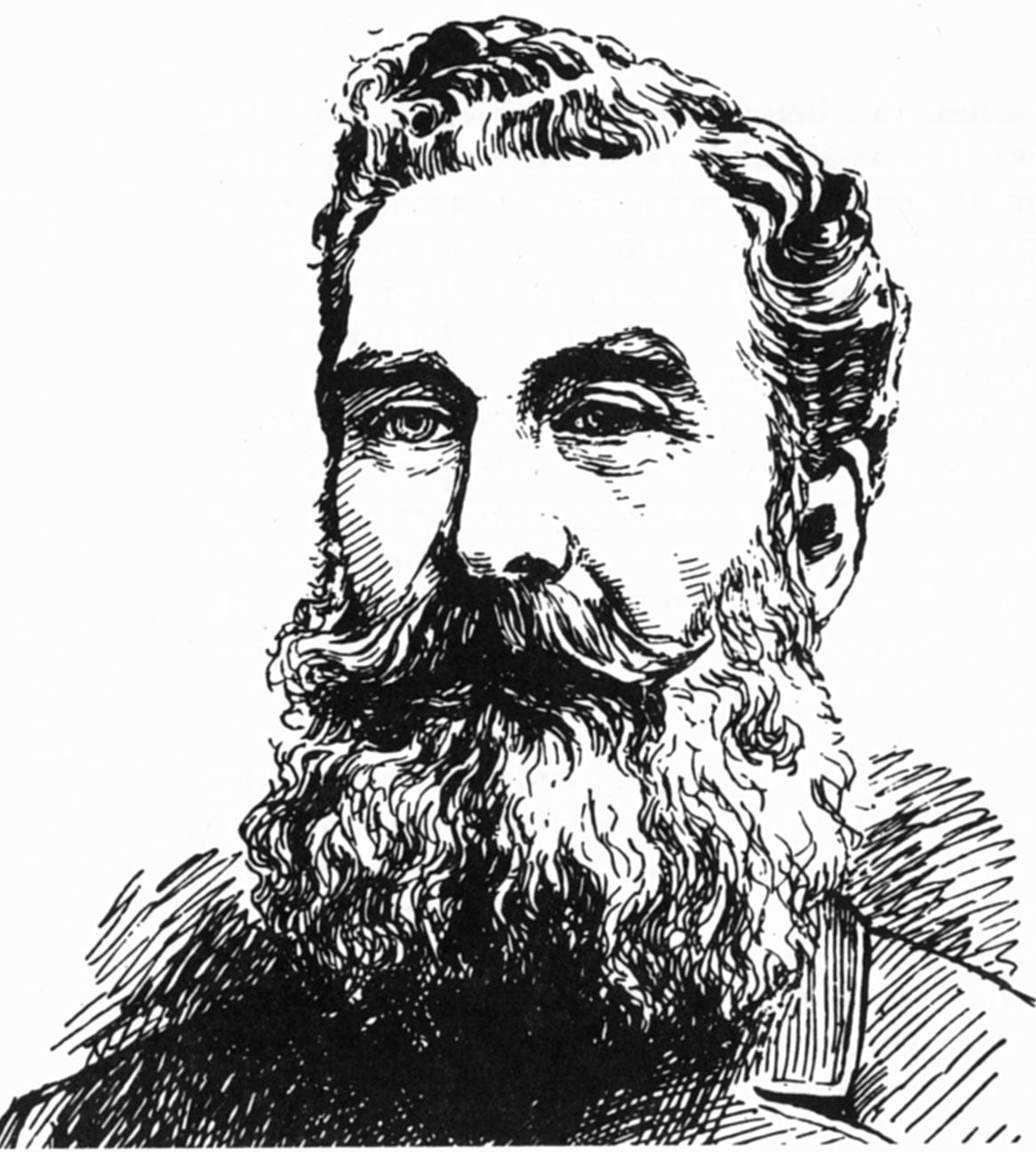 In his masterful book Horsemen of the First Frontier (1788-1900), Keith Binney chronicles the full extent of White’s triumphs, writing of how, “At the Victorian autumn meeting of 1888, (he) had nine winners, which took out every important race on the card. In 1889 at the Randwick carnival, White’s horses won the AJC Derby, the Oaks, the Spring Stakes, the Randwick and Craven Plates, the Second Foal and the Mycomb Stakes, as well as the Metropolitan.”

In total, White raced 66 winning horses, who won a total of 252 races and more than £120,000 in prize money. Remarkably, his stable rider Tom Hales rode 302 races for him and won 137 of them. As owners, what any of us would give for a single day at Randwick or Flemington standing in the shoes of the Honourable James White.

Not content with his Australian achievements, White embarked on a special breeding project, an audacious bid to win the English Derby. He bred the colts Kirkham (1887, Chester-La Princesse by Cathedral) and Narellan (1887, Chester-Princess Maud by Adventurer) to English time and transported them to the old country. Unfortunately Narellan broke down in training but Kirkham made it into the 1990 Derby field, the first Australian-bred horse to run in the classic. He finished sixth to the great Sainfoin (1887, Springfield-Sanda by Wenlock), a permanent influence in modern pedigrees as the broodmare sire of Phalaris (1913).

Today we have another reason for remembering White’s legacy. At Kirkham, the prolific Canadian-born colonial architect John Horbury Hunt built two houses for him. One of them, the towering, Gothic-style Camelot, features as the homestead for the Australian television drama A Place to Call Home.

It was also part of the 2008 Baz Luhrmann film Australia, starring Nicole Kidman and Hugh Jackman. Camelot was built on the site of John Oxley’s Kirkham Mill and partly on its foundations. Following White’s death from heart disease in 1890, most of his racing stock was dispersed. Kirkham passed into the hands of his wife, Emily (nee Arndell), who continued to import stallions and breed thoroughbreds there until 1896. Then she remarried and moved overseas, passing away in Scotland in October 1897.

The Whites had no children to carry on their racing interests at Kirkham. With his death James White’s business partnership with his brothers Francis and Henry was dissolved. In the resulting restructure, the four youngest of Francis White’s six sons took over the vast Belltrees property on Gundy Road, Scone in the Upper Hunter. This was the boyhood home of the celebrated Australian author Patrick White, James White’s great-nephew.

Founded by Oxley and expanded by White, Kirkham experienced its third incarnation under the ownership of Sir Fred Sutton in the 1960s and 70s. He was the founder of the car retailer Suttons Motors.

As an owner, Sutton raced numerous good horses out of Tommy Smith’s stable, including Flying Fable (1965, Snark-Miss Pilot by Bold Buccaneer), winner of the VRC Sires’ Produce Stakes, AJC Oaks, AJC Flight Stakes and third in the 1968 Golden Slipper. But his biggest contribution to the industry was the restoration of Kirkham Stud, which had declined in the first half of the 20th century.

Sutton stood several imported sires at Kirkham, including the English stayer Proper Pride (1959, Prince Chevalier-No Pretender by Nearco) and the Irish 2000 Guineas place-getter Kingfisher (1964, Alcide-Warspite by Palestine). By far his best stallion was Agricola (1956, Precipitation-Aurora by Hyperion from Rose Red by Swynford), who had previously stood with great success in New Zealand and sired 31 stakes-winners, including the outstanding General Command (1963) and Roman Consul (1964). In May 1973 Agricola was transferred from Kirkham to the Kelly family’s Newhaven Park Stud at Boorowa.

A schoolmate of T.J. Smith, Sutton followed the master’s advice; that a successful breeding operation relies on the purchase of the best fillies and mares on the market. Thus Sutton acquired the 1962 Golden Slipper winner Birthday Card (1959, Edmundo-Magnificent Lady by Ajax) for Kirkham, one of many high-quality broodmares on the property. Another was Better Gleam (1968, Better Boy-Silkes by Wilkes), winner of the 1971 Flight Stakes and dam (by Showdown) of the very good mare Kapalaran (1975).

Fred Sutton died in December 2004, aged 89 and Kirkham has stayed in the family’s hands, not as a horse breeding enterprise, but as a small working farm, running mainly cattle. Camelot is now owned and maintained by the Powers family who are very active in the local community, telling people about the heritage of their amazing home.

The Kirkham story is a powerful reminder of the role of the County of Cumberland as Sydney’s thoroughbred nursery during much of the 19th and 20th centuries. With urban sprawl now touching the city’s outer limits, it’s hard to visualise western Sydney as top-class horse country but in colonial times, it was as important as the Hunter Valley is today, the go-to location for the very best thoroughbred breeders.

Hopefully, ongoing urbanisation will not mean the loss of iconic sites such as Kirkham Stud. What else will I have to daydream about at the end of my morning drive?
Chester, Martini Henry and Abercorn, through to Agricola and Birthday Card, they are more than just names in the Stud Book, they’re the memories, the romanticised Australian legends that make our racing industry unique. To love the thoroughbred, as we all do, means honouring the memory of places like Kirkham.

In an inspiring pattern of endurance and rejuvenation, Oxley’s stables have now reached their bicentennial year. High on their gable, a painting of the head of Chester remains, surveying what was once his breeding kingdom. Below Chester’s portrait is the inscription: Kirkham Stud 1816, Metam Tetigit. This is Latin for “The post, he touched it”, or in its racing sense, “First at the Winning Post”. In the glory days, indeed they were.
In future editions of Bluebloods, I hope to write about the heritage of other important horse studs in western Sydney, in large part, the forgotten history of our industry.