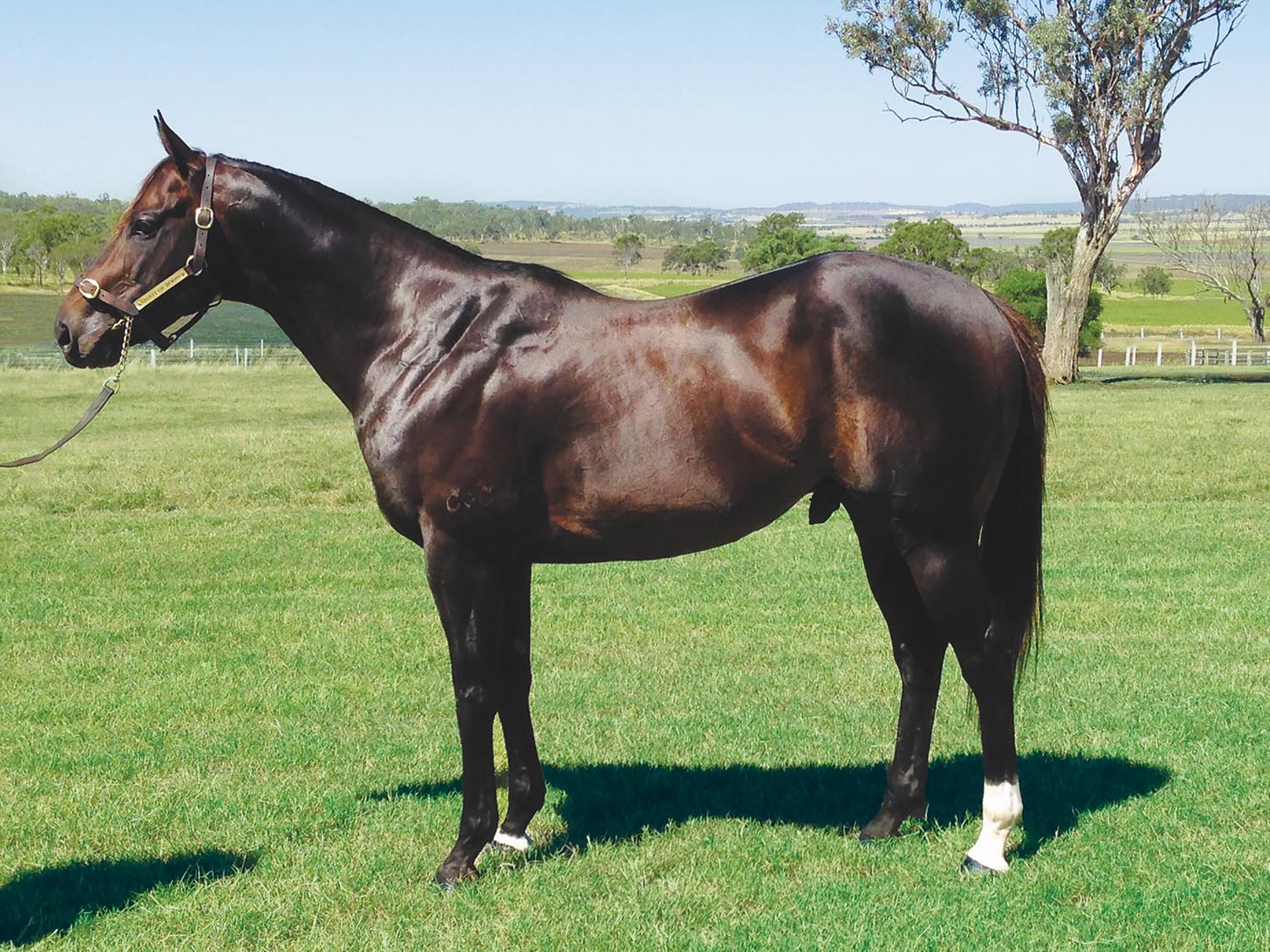 In his early days at the Eureka Stud at Cambooya (near Toowoomba), stud principal, the ebullient Colin McAlpine, promoted the imported ‘Italian Stallion’ Semipalatinsk (USA) (Nodouble-School Board by Reverse) as a horse whose name was difficult to pronounce but not difficult for discerning breeders to use. A decade later this name just rolled off the tongue as the US-bred sire’s stock cut a swathe through racing around Australia.
This 1978-foaled son of Nodouble, himself by exported Australian Epsom Handicap and Cox Plate winner Noholme (Star Kingdom), died just after turning 28 in January 15, 2006. He proved one of Queensland’s all time greats, providing more than 500 winners (24SW, 24SP) of 1800 races and $21.9m.

Referred to as the Italian Stallion because he did all his racing in that country, where he was a leading two year-old, Semipalatinsk was the best sire son of Nodouble, twice US Champion Handicap Horse and, after a modest start, a very successful sire, supplying 91 stakes winners. He was Champion Sire in the US in 1981.

He was a great flag bearer for Australia, being by Noholme, an Australian Horse of the Year and brother by Star Kingdom (IRE) to the first Golden Slipper winner Todman. Noholme sired two American champions, Nodouble and crack sprinter Shecky Green (found in the pedigree of champion sprinter Starspangledbanner). The biggest influence of Nodouble in this part of the world has been via female descendants of Semipalatinsk, the source of the dams of 687 winners of 2299 races and $42.9m.

Semipalatinsk’s success paved the way for the most successful era last century for Eureka, a stud now flourishing under the direction of Colin McAlpine’s son Scott, and could be significant in a new era of achievement through a home bred national sprint star carrying Semipalatinsk maternally who is now standing at Eureka. A half-brother to gelded $1.9m earner Temple of Boom (by Piccolo (GB)), the stallion is Spirit of Boom, a handsome son of Sequalo and Temple Dane, a speedy daughter of Special Dane (by Danehill (USA)) and Temple Top, by Semipalatinsk from Temple Black by Without Fear (FR)).

Spirit of Boom’s fourth dam, Republican Girl (IRE) is by Thatch and this son of great South American performer Forli (a grandson of Hyperion) is also in the top line as Sequalo is his great-grandson. Spirit of Boom carries Thatch 4mx5f and that horse is a brother to star broodmare Special, dam of Nureyev and second dam of Sadler’s Wells, Fairy King and Perugino.

A dozen of his first crop foals carry the power of a double of Semipalatinsk, four being out of his daughters, seven having him further back maternally and one being from a mare by a son, Skalato. He was a Eureka Stud bred son of Semipalatinsk whose nine starts included three wins, including the MVRC AAMI Vase-Gr.2, two stakes seconds, a fourth in the Victoria Derby and a disqualification from first in the MRC Caulfield Guineas-Gr.1.
Two current established sires, Savabeel and Real Saga, who have the value of Semipalatinsk in their maternal pedigrees share a common link through Glenlogan Park, Innisplain. Savabeel, a Cox Plate and Spring Champion Stakes winner and Victoria Derby second was bred by Glenlogan Park and foaled in Australia after a mating in New Zealand of champion sire Zabeel with Glenlogan-bred Savannah Success, a NZ Bloodstock Filly of the Year and Gr.1 winner in that country and Australia.

Savannah Success is by Success Express (USA) and was conceived on Noble Park (now Eliza Park), a neighbour of Glenlogan, and is from Alma Mater, a Semipalatinsk Adrian Knox Stakes winner bred on Eureka Stud. Savannah Success also produced Arlington, a Red Ransom (USA) Gr.1 placed winner five races from 1100m to 1800m, including three in Sydney and one at Trentham (Douru Cup). He stands as a sire on behalf of his strong supporter Bruce McHugh at the Nick Posa conducted Lincoln Farm Stud near Blandford in the Upper Hunter and has 100 plus mares in each of his first three seasons, averaging 93.0% fertility for the first two.

His first crop two year-olds include representatives in the stables of Gai Waterhouse, David Vandyke, Joe Pride, David Pfieffer, Marc Conners, John Sargent, Sue Grills, Tim Martin, Kerry Parker, Jane Clemments and former Waterhouse foreman Mitch Newman. If Arlington is only half as good a sire as his Waikato Stud based half-brother Savabeel, the champion New Zealand sire of 2014-15, a year he supplied six Gr.1 winners, and in line for supremacy again in 2015-16, he will be a very good winner getter. Bruce McHugh had nine of his yearlings in the catalogue for the Dubbo sale held on January 28 and four more by him are booked into the Adelaide MM Sale scheduled for March 14-16.

One of the best Western Australian performers of this time is Black Heart Bart, a five year-old gelding by the Danehill sire Blackfriars and from Sister Theresa, a Brisbane winner and Queensland Oaks fourth who is half-sister by At Talaq (USA) to Savannah Success. This means that Black Hart Bart, a winner of 10 of 26 starts and earner of $942,930 to the end of 2015, also has Semipalatinsk in his maternal breeding.

A feature of the breeding of Savabeel, Arlington, Black Hart Bart and Savannah Success is that Alma Mater is inbred 4mx4m to Star Kingdom, provided through the illustrious brothers Noholme and Todman. Noholme, as previously mentioned, is the grandsire of Alma Mater’s sire Semipalatinsk, while Todman appears as the sire of her second dam, Virginia.

Real Saga, the other sire mentioned as carrying Semipatinsk in his pedigree, is also inbred maternally close up to Star Kingdom. He is by Tale of the Cat (USA) (Storm Cat-Yarn by Mr. Prospector) and is the only foal of the prematurely deceased Eureka bred filly Windy Kate. She was a smart performer got by Eureka shuttled Air Express (IRE) from Kate be Good, a good Brisbane performer by Semipalatinsk and from Kaoru Katie, a daughter of one of the best Star Kingdom sires, Kaoru Star. Kate be Good has Star Kingdom 4mx3m.

Raced only at two in 2008-09, Real Saga challenged as the best of his generation and his six outings resulted in wins in the STC Todman Stakes-Gr.2, MRC Blue Diamond Prelude-Gr.3, AJC Breeders’ Plate-LR and AJC Hula Chief 2YO Handicap, a second in the MRC Blue Diamond-Gr.1 and a fourth in the STC Golden Slipper-Gr.1. Put into work as a sire in 2009, Real Saga has been consistently successful, including being Queensland’s leading juvenile sire every year, Australia’s second best first crop sire in 2012-13, splitting Northern Meteor and Sebring, fourth top second crop sire in 2013-14 and fourth most successful three crop sire in 2014-15. In this latter season, when his oldest runners were four, Real Saga was represented by 68 winners (66 Australia, 4SW, 2SP) of 103 races and $3,110,865.

Family history
ONE OF the greatest race mares in Australia in the first half of last century, an era when there were many races throughout the year in the 2400m to 4800m range, was Carlita, a remote relation of Savabeel, Arlington, Savannah Success and Black Heart Bart.

Successful in 13 of 49 starts from two to five years, she got off to a comfortable start at stakes level at two, winning twice and filling six places from eight starts, but then established herself as a champion at three, a year she won five from 15 outings. The efforts included wins in the Rosehill Guineas, Victoria Derby, Victoria Oaks (by five lengths) and VRC Champion Stakes (4800m), places in the AJC and VRC St Legers, the AJC Clibborn Stakes and VRC C.B. Fisher Plate and a ninth of 28 in the Melbourne Cup. The Derby, Melbourne Cup, Oaks and C.B. Fisher Plate were all run at Flemington in a span of eight days.

As a four year-old Carlita won five from 16, including the AJC Randwick Plate (3200m), VRC C.B. Fisher for the second time, King’s Plate (3200m, by 25 lengths) and Williamstown Cup, and finished third in the Melbourne Cup and AJC Cumberland Stakes (2800m). There was only one win, an appearance in the Craven Plate (2000m) at Randwick, at five, but she was placed in the Fisher Plate again and also in the VRC Melbourne Stakes (2000m) and AJC Champion Stakes and ran sixth in her third attempt at the Melbourne Cup. Put to stud, she started off in NSW, but then moved to The Nook, a famous stud at Nagambie in Victoria then owned by noted breeder A.T. Creswick. She did not produce anything of consequence.

Carlita was bred in New Zealand in 1911 following the mating of Charlemagne II (GB), a St Simon sire later at the Thompsons’ Widden Valley studs, with Couronne, a mare by Gipsy Grand, a sire produced in Australia but raced in New Zealand. When she was 11 Couronne was purchased with the foal at foot who was to become Carlita by the historic Rous family for their studs in the NSW Mudgee region, but died while crossing the Tasman. Thankfully the foal survived and went on to glory at the races.

Prior to Carlita, Couronne produced several other fillies, including Kilmeadon, a winner of the AJC Anniversary Handicap and founder of a strong family in Australia. She is the ninth dam of Savabeel and Arlington. Their sixth dam, Blue Gipsy, is an unraced daughter of the Blue Peter sire Blue Mickie (GB) who was bred in Victoria by D.S. Whiteside, importer and owner of Better Boy. The latter, bred in Ireland in 1951, was imported after two wins from six starts in England. He had 27 outings in Australia for six wins, headed by the VRC Hotham Handicap, Seymour Cup and Woodend Cup. Better Boy was also first past the post in the Caulfield Cup, but left the jockey at the starting gates. 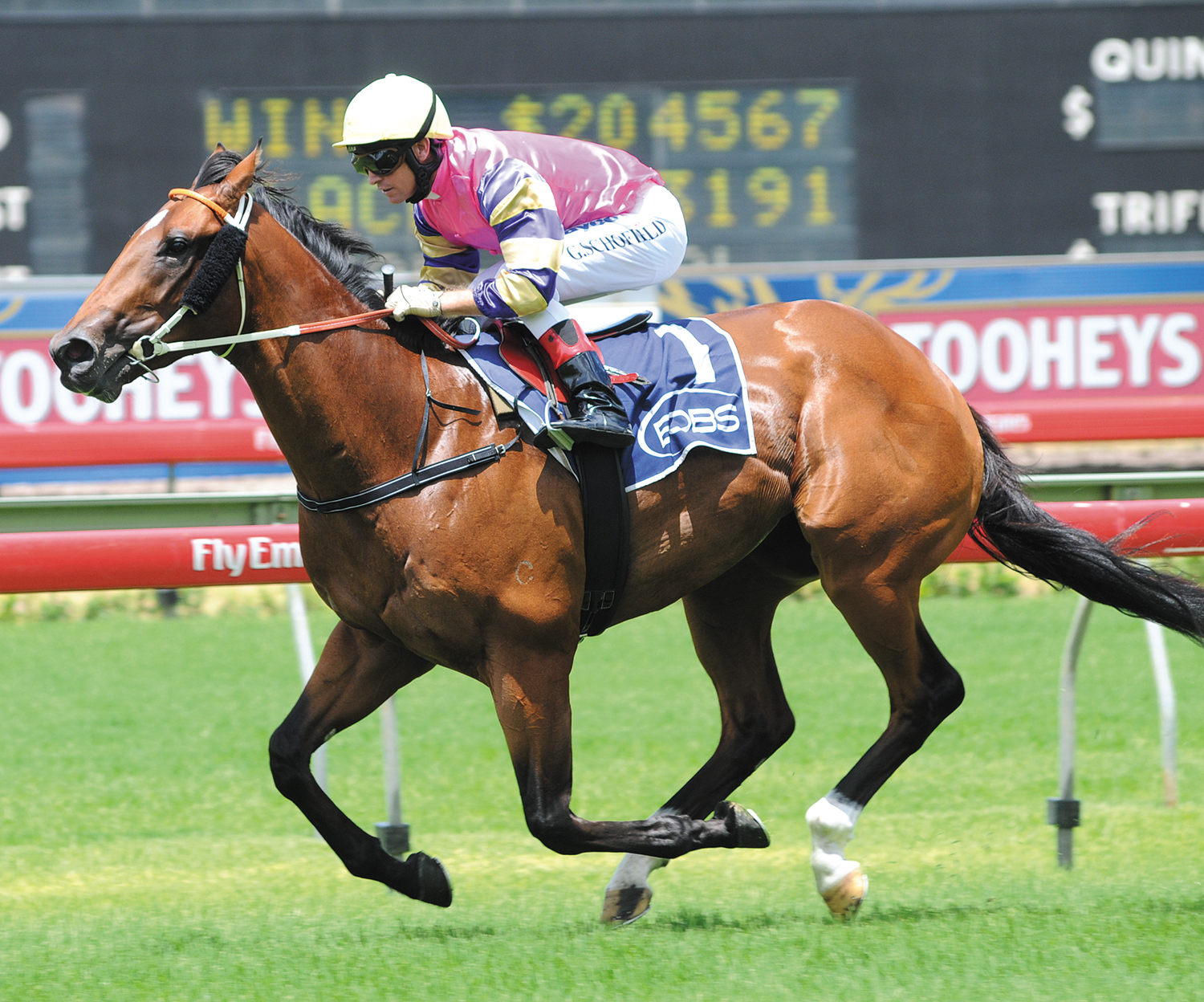 Better Boy went on to be one of Australia’s most successful sires, claiming the Champion Sire title on four occasions and becoming a big influence through his sire son Century and as a broodmare sire. Hildegarde was one of the mares who contributed to the quality of the Better Boy broodmare achievement. She was only modest herself as a producer, supplying four winners from 12 foals, but a grandaughter, Delicious Blue, bred on the Eureka Stud using the stud’s imported sire Rascolnik (GB), played a big role in the success of Semipalatinsk. A winner but once, a 1000m event, Delicious Blue produced 15 named foals, 10 of them by Semipalatinsk and including Memphis Blues, Palatious and Queensland Cup (3200m) winner Evasion.

The background of Blue Mickie
BLUE Mickie (GB), the sire of Blue Gipsy, the mare whose matings with Better Boy put him on the road to major success as a sire, was a good English performer and was one of a long list of sires sent to Australia by Stanley Wootton. The two most notable were Star Kingdom and Newtown Wonder (GB).

Raced on 20 occasions, including two placed outings at Warwick Farm, his only runs in Australia, Blue Mickie was successful on good class English tracks in five races, one at two (1400m) and the balance in the 2000m-2400m range at three and four. He finished fourth in the Yorkshire Cup over 3200m.

Athasi was by Farasi (by Desmond, by St Simon), a 35 guinea yearling “who led the life of an unimportant country stallion.” He started off on a fee of 19 guineas but after a short time this was reduced to five guineas. When he was retired from racing, Blue Mickie went to stud on Riverview, Toolamba, Victoria on a fee equivalent to $420, one which was in the higher level at the time, but he was only a moderate sire, his runners including 1961 Kilmore Cup winner Kayden.