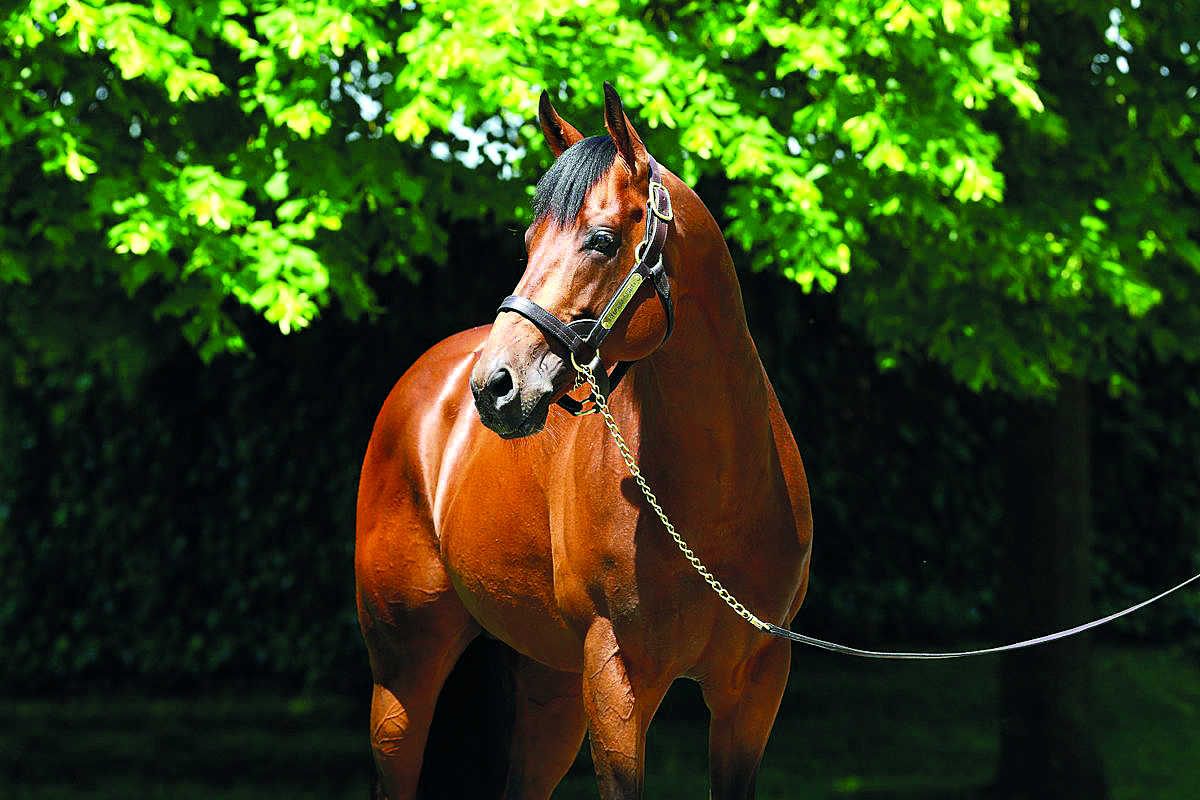 New Zealand breeders are no strangers to the Green Desert male line, thanks to the deeds of sons like Volksraad (GB), Cape Cross (IRE) and Desert Sun (GB) and that’s why they have been quick to embrace his grandson, triple Gr.1-winning miler Charm Spirit (IRE), now about to cover his fourth southern book at Windsor Park Stud.

NELSON Schick and his son Rodney have a great reputation for selecting stallions for their Windsor Park Stud in the famed Waikato region of NZ and they certainly look to have pulled the right rein with shuttler Charm Spirit (IRE). The triple Gr.1 winner, a son of Invincible Spirit (IRE), is going gangbusters with his first crop in the UK with 10 winners to mid-July, led by Gr.2 placed Charming Kid.

There is quite a buzz about his southern-bred stock too, his yearlings made up to $400,000 at Karaka (30 averaged $112,000) and averaged $216,000 at the Gold Coast Magic Millions in January, going to some very good judges including Guy Mulcaster (who selected Winx as a yearling), Ciaron Maher (paying $400,000 and $300,000 for two fillies), John O’Shea, Star Thoroughbreds, Bjorn Baker, Phillip Stokes and Boomer Bloodstock. He has covered more than 260 mares in his first three seasons and has 87 foals (now 2YO) from his first crop, enough to make a big impression in 2018-19.

A winner and Gr.1 third, both at 1400m, from three starts as a two year-old and out of 2000m winner l’Enjoleuse, a daughter of another former Windsor Park shuttler in Montjeu (Sadler’s Wells), it’s a huge bonus to see Charm Spirit’s stock coming to hand so early, especially as his three Gr.1 successes, among five wins in six starts at three, all came at a mile. He raced for Sheikh Abdulla bin Khalifa Al Thani and was trained by Freddie Head and owns a pedigree that’s very similar to Newmarket Handicap-Gr.1 winner Brazen Beau.
That horse is a son of I Am Invincible (Invincible Spirit and from Sansadee, a mare by Snaadee, whose second dam Ciboulette is a daughter of Chop Chop and Windy Answer.

Answer is a three-quarter sister to Ciboulette, being by Choperion (Chop Chop) and from Windy Answer (Windfields). Charm Sprit is by Invincible Spirit and his third dam Somfas, dam of Snaadee (USA) (Danzig), is a daughter of What a Pleasure and Ciboulette. Northern Dancer’s champion daughter Fanfreluche also happens to be a daughter of Ciboulette. That branch of the family is well known in Australasia as Fanfreluche is fourth dam of champion sire Encosta de Lago (by Fairy King, a brother to Sadler’s Wells) and third dam of champion sire Flying Spur (Danehill, by Danzig).

It’s worth pointing out too that Charm Spirit’s latest winner, the Juddmonte home bred Fulminate, is from Gr.1 winner Quiff, by Sadler’s Wells and so carries a 4mx2f cross of Sadler’s Wells, backed up by a 5mx4m cross of Sharpen Up and three lines of Northern Dancer (Nearctic-Natalma by Native Dancer) in the fifth generation. Machiavellian’s dam is inbred to Northern Dancer’s second dam Almahmoud, as his dam is by Halo (dam Cosmah) from Natalma’s daughter Raise the Standard. Half-sisters Cosmah and Natalma are from Almahmoud. 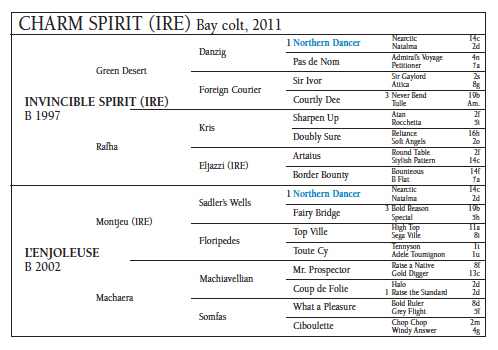 There is deep line breeding to the great Native Dancer in this pedigree as Machiavellian has that horse 3mx4f, the female line coming through his daughter Natalma, while Sharpen Up is by Native Dancer’s son Atan.

Another of Charm Spirit’s northern runners, the Newbury winner The Paddocks, whose dam is by Arch, has the brothers Kris and Diesis (by Sharpen Up) 4×3, Danzig 4mx4f, Top Ville 5fx4f and Courtly Dee 5fx5f, while the Newmarket winner Aquarius (Peintre Celebre) carries Kris 4fx4f and the three-quarter brothers Sadler’s Wells and Nureyev 4×3. Dual winner Oberyn Martell is out of a mare by Teofilo (Galileo/Danehill), giving Sadler’s Wells 4mx4m and Danzig 4mx5m, while Bailly is another to double Danzig (4mx3m), as does Early Time (4mx5m), who also has Sadler’s Wells/Nureyev 4×4. Several of the dams of these northern runners also feature Mill Reef and his descendants, a proven foil for the Sadler’s Wells in Charm Spirit’s pedigree.

One would expect daughters of NZ’s great champion sire Zabeel (dam by Nureyev) and his son Savabeel to suit Charm Spirit, especially as Zabeel’s sire Sir Tristram is a son of Sir Ivor, while Charm Spirit’s grandsire Green Desert is out of a daughter of Sir Ivor. Another whose daughters should suit is Mastercraftsman, whose sire Danehill Dancer is a son of Danehill and the Sharpen Up mare Mira Adonde, while daughters of High Chaparral (by Sadler’s Wells, second dam by Kris) fit a pedigree pattern that has worked in the north. Doubling Green Desert has also worked with the Invincible Spirit tribe and who better than former Windsor Park stalwart and eight-time Grosvenor Award winner Volksraad (GB), a very good sire of broodmares, Desert Sun (GB), best known as the sire of the mighty Sunline or Cape Cross (IRE).

There were only six three year-olds rated above Charm Spirit in Timeform’s Top 100 of that age in 2014, his 127 Timeform only 7lb below top-rated Kingman (also by Invincible Spirit) at the end of the year, clearly demonstrating how highly those experts thought of this talented colt. He also earned a World Thoroughbred Ranking of 122 that year when he won five of six starts, three Gr.1 and was a close fifth (of 14) behind Night of Thunder in the English 2000 Guineas-Gr.1.

Trained by Freddie Head in France, he’d shown good form in three starts at two, finishing second on debut over 1600m in early August 2013, winning over 1400m a month later at Longchamp (1:24.73) and then running third in the Prix Jean-Luc Lagadere-Gr.1 (1400m) at Longchamp on October 6, behind the subsequent French 2000 Guineas-Gr.1 and Breeders’ Cup Mile-Gr.1 winner Karakontie.
He started his three year-old season the following April with a win the Prix Djebel-Gr.3 at Maisons-Laffitte (1:24.30) and was then unplaced in the Guineas on May 3 before winning his final four starts. He made all the running to collect the Prix Paul de Moussac-Gr.3 (1600m in 1:35.82) at Chantilly on June 7 and was back at that track on July 14 for the Prix Jean Prat-Gr.1 (1600m) and started equal favourite in the field of seven, doing his best work at the finish to reel in subsequently demoted front runner Yuften, who moved to fourth for hampering La Hougette (third) and with Shifting Power second.

The Prix du Moulin-Gr.1 (1600m in 1:35.90) at Longchamp on September 14 hardly looked a cakewalk for Charm Spirit for Night of Thunder and Toronado (4/5 fav), both trained by Richard Hannon, were among his nine opponents. The race turned into a duel between Charm Spirit and Toronado (who retired as a dual Gr.1 winner of six races) over the final furlong, with the former prevailing by a head, while fast-finishing Night of Thunder was a neck back in third. While runner-up Toronado headed towards the Breeders’ Cup, Charm Spirit and Night of Thunder (2/1 fav) met again on October 18 when they were among the 11 runners in the Queen Elizabeth II Stakes-Gr.1 (8f) on a heavy (soft in places) track at Ascot.

Charm Spirit’s 5/1 starting price reflected the state of the ground, which was softer than any surface he had previously faced. However Charm Spirit was always going well, mid-fiel on the stand rail, before regular rider Oliver Peslier moved him up to challenge about two furlongs out as the early leaders dropped away. It proved a winning move, as once again Night of Thunder chased in vain, finishing a half-length second on the line (Toormore third). Charm Spirit was retired after his third Gr.1 success in a row, somewhat perplexing the experts at Timeform who had no doubts he would have won further good races at four.

“He was tough and genuine and came out on top in close finishes in all five of his wins in the latest season, all of them gained with less than a length to spare,” they wrote of the “well-made, attractive” Charm Spirit.

His brief shuttle career to Australia produced the tough triple Gr.1-winning filly Yosei (Fuji Kiseki) and the Gr.2 winner and Gr.1 runner-up I Am Invincible (Canny Lad) among others. The latter’s phenomenal trajectory as a sire, which saw him runner-up to Snitzel on the general sires’ premiership in 2017-18 (at mid-July) with 152 winners (19SW) of $15.3m, has prompted enormous interest in his northern-bred sons from Australasian breeders.

Of course new Zealanders were already well aware of the merits of the Green Desert branch of the Danzig sire line as Green Desert (Danzig-Foreign Courier by Sir Ivor) is the sire of Volksraad (GB) (ex Celtic Assembly by Secretariat) who left 650 winners of more than $54m, his 64SW including 14 at Gr.1 level, several featuring a male line of Sir Ivor via Sir Tristram in their pedigrees. His daughters have left 626 winners of $64m, their 37SW including eight at Gr.1 level, notably the brilliant sprinter Hellbent, who is a son of I Am Invincible and so carries Green Desert 3mx3m. There are also several with the Sir Tristram link including Kawai (Savabeel) and Devise (Danzig 3mx4m, Sir Ivor 5mx5f), whose sire Darci Brahma is bred on the Danehill/Zabeel cross.

Charm Spirit was knocked down to Freddie Head for €140,000 at Arqana’s October Sale at Deauville and is from l’Enjoleuse, winner of both her starts at three at 2000m, 2100m and a daughter of Arc de Triomphe-Gr.1 winner Montjeu (IRE) (Sadler’s Wells-Floripides by Top Ville), a short-lived sire who enjoyed acclaim in both hemispheres. Next dam Machaera produced six winners including the stakes placed Megec Blis (Soviet Star) and is by dual Gr.1 winner and champion French juvenile Machiavellian (Mr. Prospector-Coup de Folie by Halo), whose dam is a granddaughter of Natalma (dam of Northern Dancer) and carries that mare’s dam Almahmoud (Mahmoud) 3fx3f. Danehill (Danzig-Razyana by His Majesty) is 3mx3f to Natalma.

Machaera is a half-sister to the Gr.2 winners and sires Russian Bond and Snaadee (USA), both by Danzig, the Gr.3 winner and sire Cristofori (Fappiano) and the Listed winner and producer Crossover, a daughter of Cape Cross (IRE) (Green Desert-Park Appeal by Ahonoora), who shuttled for a time to NZ, leaving several Gr.1 winners including Able One, Gaze, Mikki Street, Kindacross and Seachange and whose daughters also look a good fit with Charm Spirit. Next dam is stakes placed Somfas (What a Pleasure-Ciboulette by Chop Chop), dam of 12 winners and second dam of Gr.1 winner Ransom o’War (Red Ransom) and third dam of Gr.1 runner-up Spieth (Thorn Park), who begins stud duty for Aquis in NSW in 2018. This is family 4g and Somfas is a half-sister to Northern Dancer’s champion daughter Fanfreluche whose Australian descendants include champion sires Flying Spur (Danehill) and Encosta de Lago (Fairy King).