It’s high summer in Europe with scorching temperatures and little rain to speak of for the past six weeks. But there’s still a pervading sense that the racing season hasn’t yet come to the boil to match the glorious weather. Part of this feeling is due to the fact that the very best horses from last season have yet to demonstrate anything like the form they showed in 2017.

The sprinters Battaash (TF136) and Harry Angel (TF132) have yet to deliver their best this year, while Lady Aurelia (TF133) has been retired. Among the middle distance horses, Cracksman (TF136) and Enable (TF132), have serious work ahead of them to match their brilliant exploits of a year ago. And as if to dampen things a little further, the new three-year-olds have so far failed to excite, that is all except the brilliant filly Alpha Centauri, who looks to have no peers among Europe’s milers.

This sense that the season has yet to get going can also be seen from the ranking of sires by individual Stakes winners. With the exception of Alpha Centauri (by Mastercraftsman) none of our sire’s top-rated runners have reached their pinnacle this year. Even the great Galileo is five Stakes winner shy of where he was at this point in time last year. The veteran Invincible Spirit, sire of I Am Invincible, has enjoyed a resurgence in 2018, having only had four Stakes winners at this point last term. Like, Galileo, Dubawi is a few short of last season’s total by the end of July. It was to be expected that Frankel would have a quieter time of it as his third and fourth crops, from comparatively lesser mares, started to compete. But it’s not evident yet as his nine Stakes winners (up from five at the same point in 2017) demonstrate. He has also sired his second best horse ever in the G1 St James’s Palace Stakes hero Without Parole, who was winning at Royal Ascot at the highest level on only his fourth racecourse appearance – and he’s still unbeaten! With a rating of 125p, Timeform rightly conclude that there’s more to come from this miler. 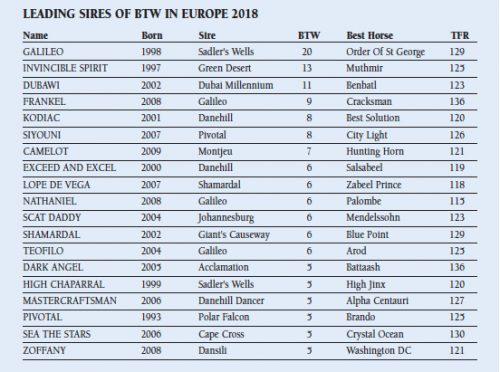 There are, however, some sires who have come to the fore this year, none more so than the 2,000 Guineas and Derby winner Camelot, who has come up with two G1 winners among his first crop in Irish Derby hero Latrobe and Belmont Oaks heroine Athena. The son of Montjeu made rapid late progress last year with his first juveniles but it was to be expected that he’d move forward with his first three-year-olds. And Camelot has not disappointed. In fact, such has been his progress in 2018 that it’s perfectly reasonable to suggest that he can go all the way to the top.

In terms of his elite runners, he’s already got the best set of ten runners as assessed by Timeform, among the sires who retired in 2014. Currently they have an average rating of 111, a figure we can expect to be much higher by the end of the season.

That said, top-class staying stallions don’t have to get to the front this soon in their careers. It took Galileo six years to put together a set of ten horses that had the best average Timeform rating among his contemporaries – and he’s never been surpassed since. Furthermore, Camelot’s ratio of Stakes winners – another metric that should rise through the year – is currently identical to what Galileo recorded at the end of his second year. It’s not hard to imagine him joining Galileo, Sea The Stars and Teofilo as top-class sources of quality staying horses in Europe, particularly if breeders trust him with their best mares. For many, he’s just what European racing needs and could potentially be just what Coolmore are looking for too. n