Interviews with Turangga’s Stuart Ramsey are always interesting and this year approaching Easter was no different. Instead of meeting up at Turangga, we conducted the interview at Scone Race Club during the race meeting, over lunch. Moreover, Stuart won the second race on the card courtesy of a fine training effort from his son John, with Time Thief filly Lonely Heart, raced in partnership with friends.

Stuart, give us an overview of your draft.

“They are all good types from great broodmares.” Let’s look at the three pedigree wise, courtesy of pedigree analyses from Kristen Manning and followed by comments from Stuart.

Lot 52 b.f Written Tycoon – Impeach (by Viscount): by one of the country’s most popular stallions (little wonder seeming that he just keeps doing the job with his latest Group One star being the Oakleigh Plate-Gr.1, 1100m heroine Booker), this half-sister to the Rosehill winner Accuse and the city placed three times winner Incrimination is out of a talented race mare who unfortunately we got to see only four times on the track. On three of those occasions she was in the winners’ circle at Canterbury and Rosehill. A half-sister to the Golden Rose-Gr.1, 1400m winning stallion Denman, the VRC Sires’ Produce Stakes-Gr.1, 1400m winning successful broodmare Preserve (dam of the Group Three gallopers Safeguard and Archives) and the two times Listed winner Rio Osa, Impeach is also a half-sister to the dam of Soul who has been successful at Group level in Australia and England. This filly, who can also boast amongst her relations the big race winners Dark Eclipse (Golden Slipper Stakes-Gr.1, 1200m) and Taj Rossi (W.S Cox Plate-Gr.1, 2040m, VRC Derby-Gr.1, 2500m, George Adams Stakes-Gr.1, 1600m), boasts close up crosses of two outstanding local speed influences Marscay (4fx4f) and Vain (4fx3f). Written Tycoon has sired four stakes winners (with an impressive overall strike rate of 79.3% winners-to-runners) with a Vain cross whilst he has been represented by two stakes winners and four stakes placegetters line-bred to Marscay. He also fares well when the great mare Oceana is duplicated and she is 7mx7m here via her sons Noholme II and Faringdon.

Lot 147 br.c Teofilo – Nahayan (by Zabeel): son of an excellent racemare (three times Group One placed) and broodmare (whose champion sire Zabeel is an influential damsire of 191 stakes winners including Teofilo’s triple Group One winning son Humidor; Teofilo has had just five runners out of Zabeel mares and all are winners. Nahayan has been represented by five winners from six to race including the stakes placed metropolitan winners Upper Echelon, Governance and Kukla as well as the city winners Stone In His Shoe and Sichuan Boss (still racing well in Hong Kong). Hailing from the family of the New Zealand based big race winners Field Dancer (Easter Handicap-Gr.1, 1600m, NZ Stakes-Gr.1, 2000m) and Just A Dancer (Sydney Cup-Gr.1, 3200m, Brisbane Cup-Gr.1, 3200m), this colt can also boast amongst his relations the UK star Santa Claus, winner of the Epsom Derby-Gr.1, 12f, the Irish Derby-Gr.1, 12f and the Irish 2000 Guineas-Gr.1, 8f. He boasts crosses of the terrific mares Natalma (via her son Northern Dancer and great grandson Danehill) and Special (through her grandson Sadler’s Wells and her son Nureyev noting that this Galileo/Nureyev combination has produced 110 stakes winners, 19 of whom have been successful at Group One level) and it is also worth noting that Teofilo has combined well with this fellow’s second dam sire Star Way, that cross producing his popular triple Group One winning son Happy Clapper. Teofilo is a descendant of the acclaimed matriarch Chelandry and appreciates further strains; Nahayan having another influential descendant in Clarion close up with Teofilo’s Group One sons Trading Leather and Happy Clapper also carrying Chelandry. And of course Teofilo’s dam sire Danehill has always loved Sir Tristram, the combination of those two great stallions providing us with 506 stakes winners including 75 Group One winners.

“By the great Teofilo from the champion Zabeel mare Nahayan. Shows tremendous scope and quality.”

Lot 228 b.c Teofilo – Rose O’War (by Danehill): many are wary of a close up cross of this colt’s famed dam sire Danehill who appears 3fx3c here but it is worth noting that six of the seven runners by Teofilo out of Danehill mares are winners including the dual stakes winner Paene Magnus and from Danehill line mares Teofilo has also sired the Group Two winner Brazuca, the Group Three gallopers Teodoro and Loritania and the Listed winners Weather With You, Dubai Sand and Bloomfield. There is more to like about this pedigree with crosses of Natalma, Flower Bowl (twice via her son His Majesty and once through Graustark) and Victoriana (whose son Victoria Park is Teofilo’s third damsire whilst her grandson Vice Regent is the sire of Rose O’War’s dam sire New Regent). Teofilo has had just 17 runners out of mares carrying a strain of Vice Regent and two of those are stakes winners whilst he also fares extremely well with the Graustark strain, a cross that has provided him with five stakes winners including Melbourne Cup-Gr.1, 3200m hero Cross Counter. This colt’s dam was a terrific race mare, winning seven races and amassing over $890,000 in stakes with her four biggest successes being the Diamond Jubilee Stakes-Gr.2, 600m, the Angus Armanasco Stakes-Gr.3, 1600m (in which she became the very first horse to claim the scalp of the mighty Sunline who had won her first eight starts) the Great Western Stakes-Listed, 1600m and The Vanity-Listed, 1400m. Rose O’War, who sadly passed away last spring, has well and truly proven her worth at stud producing nine winners from ten to race including Listed winner Rose Of Peace and city winners Hingus Rose, Star Wars, Federosa and Shackled Rose. Her dam is the AJC Oaks-Gr.1, 2400m winner Savana City, also dam of Hong Kong star Mr Vitality, three times Mornington Cup-Listed,2000m winner Gunnamatta and the Listed winning stallion Danehill Express. “From the outstanding mare Rose O’ War, the only horse to beat Sunline at 3. A magnificent type which fits with the qualities of his champion female line.” 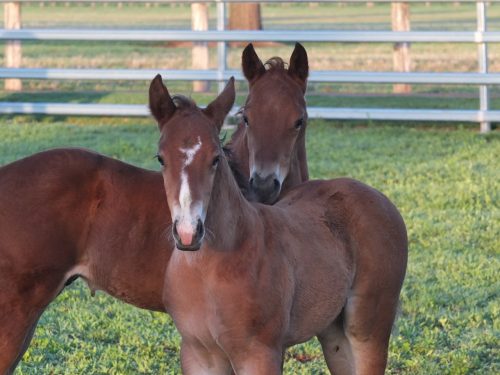 Who are your leading Easter graduates?

“Without a doubt it is Mr Murphy with 3 X Group Ones.”

“Keep to nature – that came from my Dad and Grandfather.”

Outside the horses, what is your favourite activity?

“Work in general and cattle in particular.”

What is your perfect pizza?

Is there something you constantly lose or misplace around the house?

What is the longest you have gone without sleep?

If you could retire tomorrow, what would you do?

“Exactly what I am doing now. I love it.”

Of the four seasons which ones do like the most and which do you hate?