“The largest draft we have presented in recent years,” said Tyreel Stud Manager Robert Sims as he looks forward to a busy Easter. “It is a draft of great strength and depth with a fantastic mix of stallions,” he continued, confident of good results on the back of great past success.

“Tyreel has a long history of presenting its best yearlings at Easter and we enjoyed a stellar moment very early on this season when Espaaniyah (the I Am Invincible filly who fetched a $750,000 last year) won the Inglis Banner on W.S Cox Plate day.”

Lot 48 chestnut colt by Sebring from Iamhere (by I Am Invincible): first foal for a four times winning granddaughter of Triscay, five times Group One winner whose line continues to thrive through La Baraka, Alizes, Alizee and Astern. “A really sharp looking two-year-old sort who is a nice blend of Sebring and I Am Invincible. The mare has done a great job with her first foal.”

Lot 105 bay colt by Medaglia d’Oro from Madam Gangster (by Al Maher): first foal for a dual Group Three winner who won six races including four in a row. Boasting crosses of Natalma, Almahmoud and Somethingroyal, he hails from the family of Group One winner Fine Society. “He is a big, scopey colt with plenty of strength and the stamp of his sire, with a great attitude.”

Lot 126 bay filly by Vancouver from Miss Mossman (by Mossman): daughter of a New Zealand Oaks-Gr.1, 2400m winner from the family of Alynda, Ivory’s Irish, Brawny Spirit, Joker’s Wild and Hit The Roof. “She is an elegant filly with plenty of quality.”

Lot 273 bay filly by Redoute’s Choice from Smiles for Layla (by Zabeel): out of a city winning sister to the Light Fingers Stakes-Gr.2, 1200m winner Adrift from the family of Maldivian. “She is all quality, a proper showpiece filly; a really nice example of what Redoute’s Choice can produce. She has size and scope with a lovely overstep.” 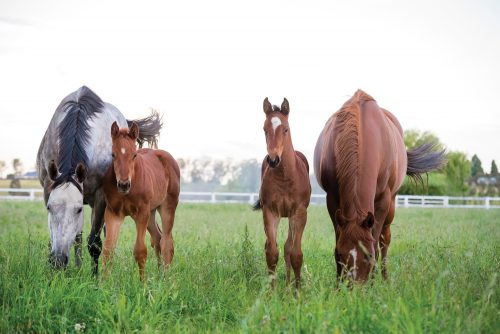 Lot 333 chestnut filly by Teofilo from Whisper Bay (by Royal Academy): half-sister to the Listed winner Indian Thunder out of a stakes winning half-sister to the dam of Group One mare Hurtle Myrtle. “She is one of the best Teofilos anyone will have seen, one of the highlights of our draft who is going to catch everyone’s eye. She is so strong through her shoulder and hip and has a great, sharp attitude.”

Lot 337 bay colt by Exceed and Excel from Written Dash (by Written Tycoon): second foal (her first by Brazen Beau fetched $400,000) for a Typhoon Tracy Stakes-Gr.3, 1200m. “Probably our headliner, he is all Exceed And Excel, powerfully built, a real sprinting type with a massive chest. He is built to be an exceptional two-year-old.”

Lot 350 bay colt by Fastnet Rock from Affairoftheheart (by Fusaichi Pegasus): out of a stakes placed six times winning daughter of the Listed winner Call Me Lily, dam of the dual Group One winner Soriano. “He has that real Fastnet Rock walk, so light on his feet with wonderful quality – he is the best style of Fastnet Rock you can get with a lovely head, whilst the angles through his hips and shoulders are absolutely outstanding.”

Lot 363 grey filly by More Than Ready from Aseena (by Verglas): half-sister to the French seven times winner Nomad Arrow out of an imported stakes placed half-sister to the Listed winner Sunday Nectar from a strong European family. “She is a neat, compact filly with a good hind end. She is sharp and elegant from a fast family.”

Lot 377 bay/brown filly by Snitzel from Black Canary (by Medaglia d’Oro): a descendant of the famed matriarch La Troienne, she is the first foal for a city placed half-sister to the Listed winner Armed For Action. Third dam is the Group One mare Bravery, ancestress of eleven stakes winners. “A great result from a first mating, she is correct, a good size with a lovely hip and shoulder and a great attitude. She is very laid back and workmanlike with a high achieving walk.”

Lot 430 bay colt by Fastnet Rock from Dower (by Pins): half-brother to the dual stakes winner Dowager Queen out of a stakes placed dual city winner from the family of Group One sprinter Swick. “Very typical of his sire, he has his dad’s head with plenty of strength and a nice, loose action.”

Lot 433 bay filly by Savabeel from Dubrovnik (by Medaglia d’Oro): first foal for a three times winning daughter of a sister to the Group Three mare Pasikatera, dam of the stakes winner Planet Voyage. “She is a surprise package who we think Australian buyers are going to love. She is very powerful with lovely muscle definition and a great walk.”

Lot 437 brown/black colt by from Hinchinbrook from Elsewhere (by Lonhro): half-brother to the city winner Choreograph and the promising Hong Kong based three-year-old Mischievous Sundae out of a metropolitan winning half-sister to Long John. “The best foal the mare has had so far, he has lovely depth of chest with a nice, loose action He has plenty of range and scope with a great attitude.”

“Something we are always mindful of is the old saying that horses are mirrors to their environment. And so we go to great lengths to develop the best systems to educate our horses in the most positive way.”

“We are very lucky to enjoy the Blue Mountains where our whole family enjoys working together with our sheep and flower growing enterprise.”

“For the team at Tyreel all seasons of stud life provide us with great highs and lows but ultimately the sales time year is most exciting as this is the harvest period for breeders. The time where our matings, late night foalings, nurturing of young stock and final preparation come to conclusion. The end of a small chapter each year where all the team present their horses in the best way possible, each having a favourite and each with the thought that this could be the one. This is what it is all about.”