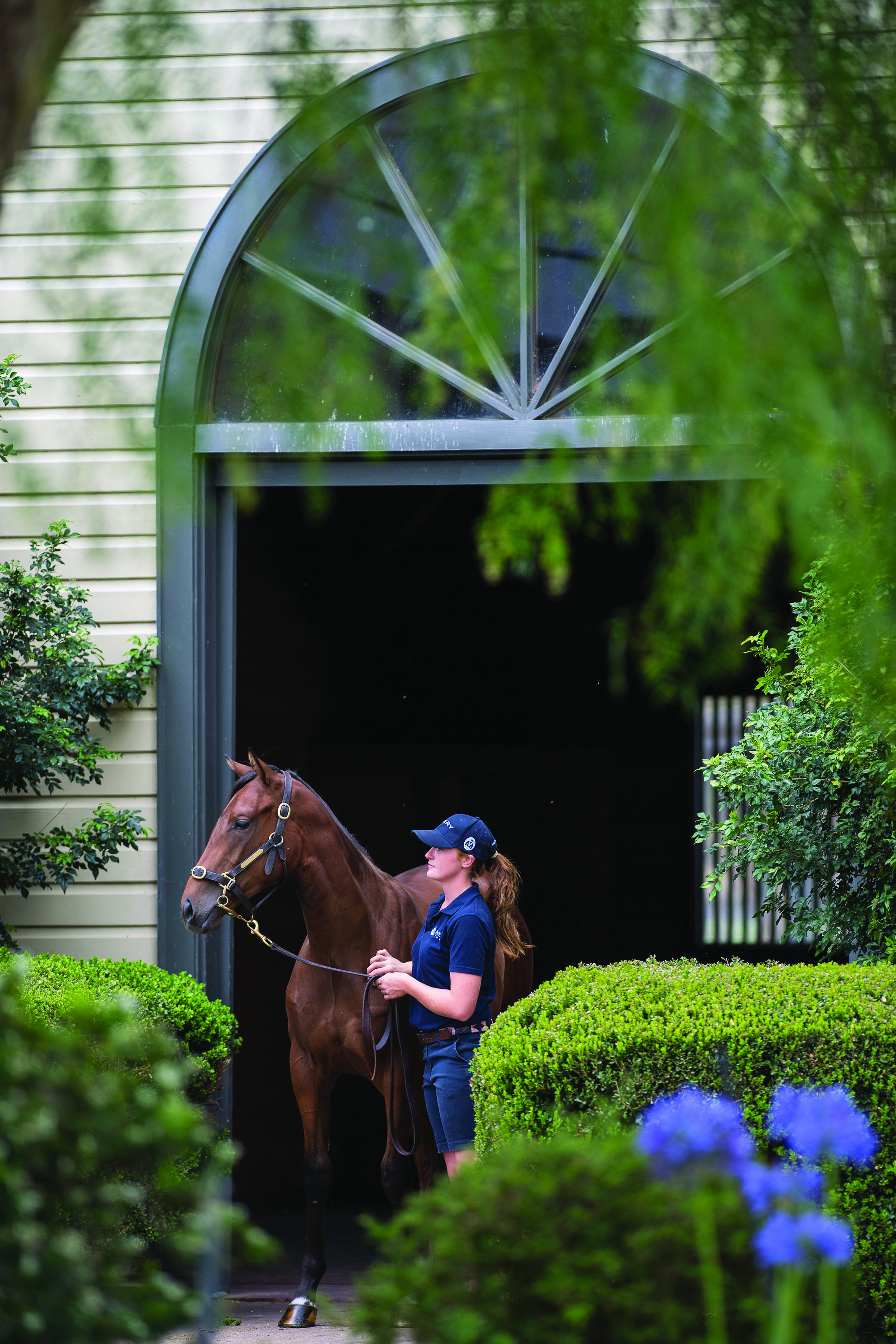 Vinery Stud has built an enviable record at the Inglis Easter Yearling Sale with three Gr.1 winners sold in the past few years. Aristia (Lonhro) is the current reigning Gr.1 VRC Oaks winner for this season, and has earned over $800,000, making her $80,000 price at Easter 2017 great value.

LOT 187. Bay filly out of POPPET’S TREASURE and sired by ALL TOO HARD.

Russian Revolution (Snitzel) showed promise immediately when he won his first four starts (two in group company), and the colt ended his career with a stallion making victory in the Gr.1 Oakleigh Plate of 2018, while Entisaar (More Than Ready) won the Gr.1 Allan Robertson Championship in South Africa, becoming a Champion 2yo that year. Other recent Stakes winners from the Vinery drafts at Inglis Easter include Gr.2 winner Villermont (All Too Hard), Montauk (More Than Ready) and Morvada (Mossman).

Vinery’s Adam White said, “We generally don’t have a large draft for Sydney Easter but this year we have a nice group of ten yearling to take to the sale. All are by proven sires and with recent success from our Easter drafts like VRC Oaks winner Aristia and Russian Revolution, it’s a draft well worth people’s inspection.”

In 2019, Vinery will present a select draft of ten yearlings, and as Adam White said, all of them by proven stallions. Medaglia d’Oro is the sire of Gr.1 Golden Slipper winner Vancouver in Australia, while his northern hemisphere crops include the legendary gallopers Songbird, and Rachel Alexandra. All up he has left 21 Gr.1 winners, and 120 Stakes winners, giving confidence to buyers who inspect Lot 247. This colt is the second foal of the Gr.2 winner Scandiva (Fastnet Rock), whose dam is an iconic broodmare. Scandinavia, herself a group winner is the dam of Gr.1 Magnus, and Stakes winners Wilander, Arctic Flight, and the aforementioned Scandiva. Scandinavia is the granddam of unbeaten Champion Black Caviar, and multiple Gr.1 winner All Too Hard. This colt has a stallion’s pedigree, and will be high on most buyer’s inspection lists.

A half-brother to Gr.3 winner Swear is Lot 413, and this colt by Gr.1 sire Hinchinbrook is out of NZ Top 2yo Filly Crossyourheart (Show a Heart), and she is a full sister to Gr.3 winner Gotta Have Heart, from the family of Soleil Rouge and All Thrills Too.

Written Tycoon notched up his sixth Gr.1 winner recently with Booker, and Lot 46 has the distinction of being a half-brother to Gr.2 winner Summer Sham, from the stallion making family of Redoute’s Choice, Rubick, Manhattan Rain, Hurricane Sky, Umatilla, Al Maher, not to mention last season’s Champion 3yo Filly Shoals.

Vinery Stud’s All Too Hard has started his stallion career in style, with the likes of Villermont, Demonetization, Tarka, All Too Huiying, Unfair Dismissal, and many others. His filly, Lot 318, is out of Trickett, a speedy General Nediym mare who is a full sister to Gr.2 winner Ichihara as well as Stakes winners Au Chocolat, and Isurava (dam of the very fast Menari). This is the family of tough Gr.1 winner and Champion Tie the Knot.

Lonhro sired yet another Gr.1 winner recently with Lure and his filly, Lot 324, has a nice pedigree to support her. Her dam, Urban Rocker (Fastnet Rock), is a city winning daughter of Gr.3 winner Bhandara (Zabeel), herself a half-sister to Gr.1 winner Sharvasti. Stradbroke winner Linton also features in this family. Hot sire I Am Invincible rounds out this draft with two yearlings. Lot 34 is a filly from Gracie’s Lass, a half-sister to Gr.1 winner Delectation. This filly is Gracie’s Lass’ second foal and her first foal is already a two-year-old-winner this season. If you’d prefer a colt by Brazen Beau’s sire, Vinery Stud have Lot 93 on offer at the 2019 Inglis Easter Yearling Sale. He is the first foal of Liten Prinsessa, a four-race winning full sister to Gr.1 juvenile winner and Champion 2yo in New Zealand, Ruud Awakening. This pedigree shouts early speed, with Ruud Awakening’s half-sister First Dawn (by I Am Invincible’s son Brazen Beau) already Stakes placed at two this season, which shows this family crosses well with I Am Invincible.