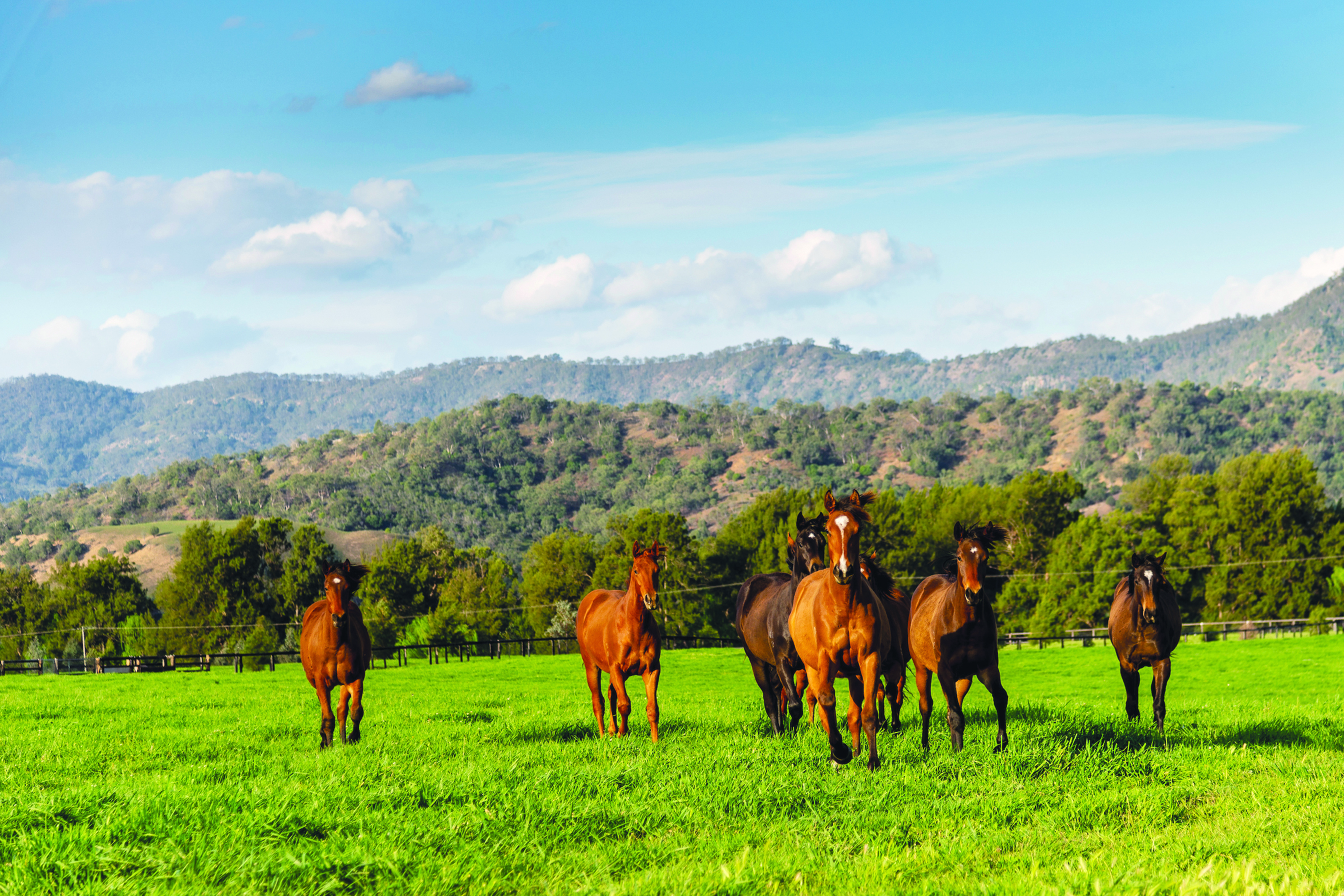 Segenhoe Stud was the pacesetter among sellers of juvenile success in Australia last season and General Manager Peter O’Brien expects the trend to continue based on January’s precocious Magic Millions draft.

Another 12 months of great racetrack success was spearheaded by the two-year-olds sold by Segenhoe at yearling sales in 2019.
“Over the last year, the biggest kick for me and everyone on the farm was that we were the leading vendor of stakes performing two-year-olds,” O’Brien said.
“Separate to that, the biggest highlight from a Segenhoe perspective this year and the biggest lowlight, was Voodoo Lad.
“Yarraman bred him, but we raced him and he got his Group 1 in the Winterbottom, then he tragically broke his leg. It was the highs and lows of racing.”
While Voodoo Lad was bought to race for Segenhoe, classy gallopers like Oohood, Anaheed, Catch Me, Bella Rossa and Manuel shone the torch on farm graduates, while Winter Bride and Pretty In Pink carried the Segenhoe colours to Group race success in Melbourne, Sydney and Brisbane.
“It’s a unique farm, I honestly think it’s the best farm in Australia. It’s got a variety of undulating hills, nice river flats with a lovely combination of dry and irrigated paddocks. We are blessed to have ample water from the Hunter river” O’Brien says.
“Five years ago we developed a state of the art new yearling farm on recently puchased adjacent land. We specifically wanted large undulating paddocks and are conscious
of keeping the stocking numbers low.
“So far, I think we are seeing the benefits of that on the racetrack.
“Our ethos is that we want to breed athletes, everything from when we plan matings … our view is that performance on the racetrack is more important than performance in the sales ring.”

Segenhoe is set to offer another stellar Magic Millions draft in 2020, off the back of 19 selling at the 2019 sale for a top price of $1.4million and gross of $7.45million. It placed the farm second by average for vendors with 10 or more sold.
Segenhoe has 22 yearlings in the catalogue for the 2020 sale.
“As ever with our draft, we generally try and breed to proven sires, so we have I Am Invincible, Exceed, Not A Single Doubt, Fastnet, Zoustar, Pierro … but we do have some young stallions Maurice, American Pharoah and Capitalist,” O’Brien said.
“With the Magic Millions, they are all precocious, early two-year-old types and they have been chosen specifically for the sale. “From the colts, point of view, the standout is probably the I Am Invincible out of Adrift, she’s a Zabeel mare who beat Winx in the Light Fingers. “He’s a stunning colt, faultless, beautiful balance, great action.
“Adrift has been a difficult breeder, so this is her first live foal and I think he will be highly sought after.
“We have a beautiful Medaglia d’Oro colt out of Precautions, who is a Lonhro mare out of the Group 1 winner Regal Cheer. This fellow has really thrown to the female side of the family. He has a massive hip and extraordinary action. “People will look at the sire and think he will need time. This fellow won’t. He’s a deadset two-year-old.
“Another good colt is by Zoustar out of Savsenga. He’s a real Magic Millions horse physically. A great action and he’s just a stunning animal.”

O’Brien nominated a So You Think filly from Spurs And Sashes as one of the best fillies in the draft. “Spurs And Sashes is a half-sister to Sabatini. Normally you wouldn’t be aiming a So You Think at the Magic Millions, but this filly has extraordinary strength. She’s a big girl and another one with a terrific action,” he said. “She looks precocious, an early coming So You Think.
“The I Am Invincible–Stellar Vinia filly is a half-sister to a Group 2 winner in South Africa from the family of Kosi Bay and Calveen. She’s a big girl, very imposing and a very mature filly.
“Another standout filly is the Pride Of Dubai-Jezzabba, who is a daughter of Piavonic.” Her 2YO full- sister called Dubai Star recently ran second in the Listed Merson Cooper S at her first start.
Meanwhile, the paddocks of Segenhoe have a close link to Winx at the present time.
The farm is of course home to Winx’s mum Vegas Showgirl, who went to I Am Invincible this year, but also to the aforementioned Adrift and also Gust Of Wind, who boasts
a win over Winx in the 2015 ATC Oaks.
Other notable mares roaming Segenhoe at the moment include the recently retired Flight Stakes winner Oohood and also the super talented sprinter Pure Elation, who went
to Zoustar.
Pride Of Dubai’s dam Al Anood was scheduled for a date with Lonhro.
“We have a very loyal and strong group of clients supporting the farm. The main owners on our farm outside of Segenhoe are Sheikh Khalifa, John Camilleri, Chris and Jane Barham and Sir Owen Glen,” O’Brien noted.
What appeals to you most about the MM sales and race series?
I love the timing of it, it’s perfect after a long hard season. It’s brilliantly managed in a beautiful location, attracts all the leading buyers and it’s going from strength to strength.
Adding the new races to the race series has been extraordinary and it gives everyone a chance to win. We are especially fond of the staying race, as we’ve won it the last two years with Tumultuous!
How would you sum up your farm and the service you offer?
We are boutique, keep our numbers limited, try and keep everything as natural as possible. With the Hunter River dissecting the farm, we are fortunate to have a great water allocation. The farm to me is designed to rear great racehorses and that’s what it’s doing.
How many mares did you breed with in 2019, who is the best known?
We bred about 168 mares, of which about 50 are Segenhoe’s. The best known mares on the farm include Vegas Showgirl, Girl Hussler, Gust Of Wind and Oohood.
How would you summarise your draft this year?
Consistent two-year-old types, well balanced, mature, horses.
In 40 years what will people be nostalgic for?
Polar Bears.
Would you rather be an Eagle or a Labrador?
You know the way you crossbreed now?
I’d like to be a Labradeagle so I could eat and sleep all day and then go for a soar in the evening.
If your job gave you a surprise three day paid break to rest and recuperate, what would you do with those three days?
I would go to Blueys Beach, sit by the water, drink a beer and read a book.
What makes you roll your eyes every time you hear it?
When a trainer says a horse needs more ground.