Where do you go to buy the next Magic Millions 2YO Classic winner?
The draft that sold the previous one – Vinery Stud sold 2019 Magic Millions winner Exhilarates as a yearling at this very sale, and the filly has gone on with it at three, recently winning the Gr.3 Quezette Stakes

Throw in a few other winners, such as Gr.3 winner Kooweerup and stakes placed Still Single from the same draft. Recent Gr.3 Maribyrnong Plate winner Hard Landing is the first stakes winner from last year’s Magic Millions draft offered by Vinery giving you confidence that Vinery Stud’s yearlings make top class racehorses. Bluebloods spoke to Adam White about Vinery Stud’s 2020 Magic Millions Gold Coast Yearling Sale draft.
What appeals to you most about the MM sales and race series?
It’s just a great atmosphere around the first sale of the year. As vendors we are all under some pressure to get the horses sold but the majority of people are in good spirits and excited about being around that sales environment again. With the race day that Magic Millions have now established it is also an exciting time to be seeing previous graduates that have come through the drafts heading towards some of the rich races. For a long time it was just the two year old race but now there is so much on offer for all types of racehorses and seeing horses that you have either sold, or purchased heading into these races is a real buzz. 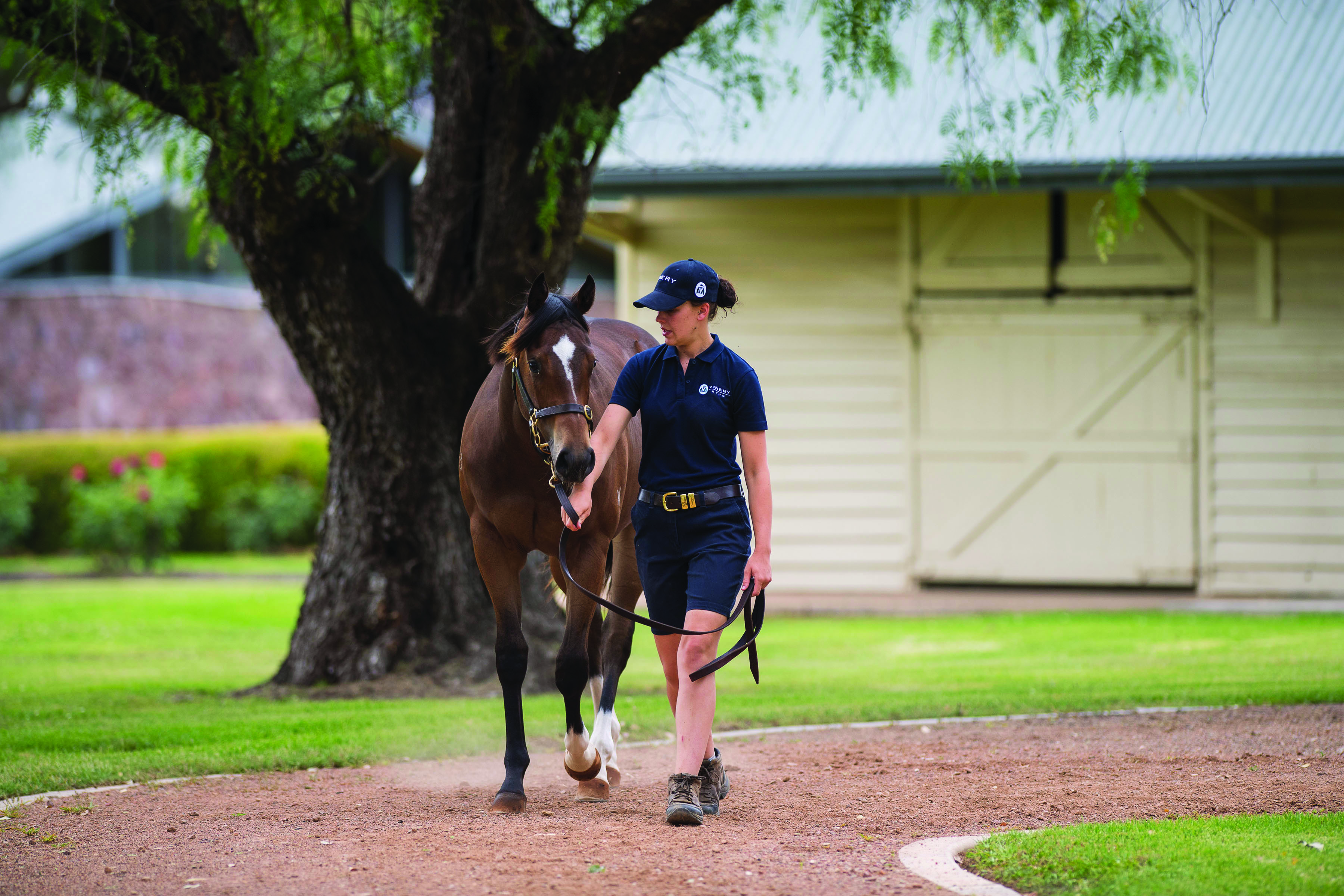 Exhilarates as a yearling at Vinery Stud

How would you sum up your farm and the service you offer?
Vinery is a farm that has a very long, proud history of producing champion racehorses. Through our Magic Millions drafts alone we have sold horses such as Atlantic Jewel, Rubick, Commanding Jewel and of course last year’s Magic Millions winner Exhilarates. The farm itself is just a wonderful property to rear thoroughbreds on and we are very fortunate that the buyers recognise this.
How many mares did you breed with in 2019, who is the best known?
We have roughly 200 full time resident mares on Vinery, which are either owned by Vinery and its partners, or good clients. Some of the better known mares would include Samaready, who was obviously a top class racehorse and is also the mother of Exhilarates, Allez Wonder is another Gr1 winner and we have her Tavistock filly in this year’s draft, but there’s also Gr.1-winning mares such as Commanding Jewel, Devil Moon, Sacred Choice and Snitzerland (dam of Hard Landing) to name a few.
How would you summarise your draft this year?
It’s a draft with a nice variety of stallions represented including our own proven stallions More Than Ready and All Too Hard. We are also presenting yearlings by Not A Single Doubt, Snitzel, Sebring, Written Tycoon, Star Witness and So You Think.
There is great talk on the first racing crop by Headwater and Press Statement and we are pleased to be offering yearlings by them as well.
Some of the pedigree highlights in this draft are the Tavistock filly out of Gr.1 winner Allez Wonder (Redoute’s Choice), making this filly a half-sister to group winner Kooweerup (More Than Ready). There is a three-quarter-brother, by Snitzel, to group winner Very Tempting, out of a half-sister to Gr.1 Golden Slipper winner Catbird. Champion 3YO Filly in Brazil, Loving New, has a So You Think colt, and this yearling is a half-brother to three stakes horses including Gr.1 winner Questing New.
A colt by All Too Hard from Innishbeg is a half-brother to two stakes winners, including speedy juvenile Aspect, while the All Too Hard colt from Night War is closely related to Exhilarates. The fourth foal of American stakes winner Roman Treasure is by a colt by Sebring, and his dam is a daughter of Gr.1 winner Jeanne Jones.
We are very excited to present six yearlings by our exciting first season sire Star Turn – he was a Magic Millions graduate himself and was an electrifying sprinter at a young age so his stock will be very well suited to this sale.
Pedigree highlights among the six Star Turn yearlings include a half-sister to group placed Still Single out of Listed winner Single Style, and the first live foal of dual Listed winner of eight races, Miss Seton Sands. Of note is the third foal, a colt, of Gr.1 placed city winner Vittoria.
Which country would you most like to visit next and why?
I have been lucky enough to have done a few countries in South America. So maybe more there, certainly the Patagonia region.
If animals could talk, which animal would be the most annoying?
Our office cat Forrest.