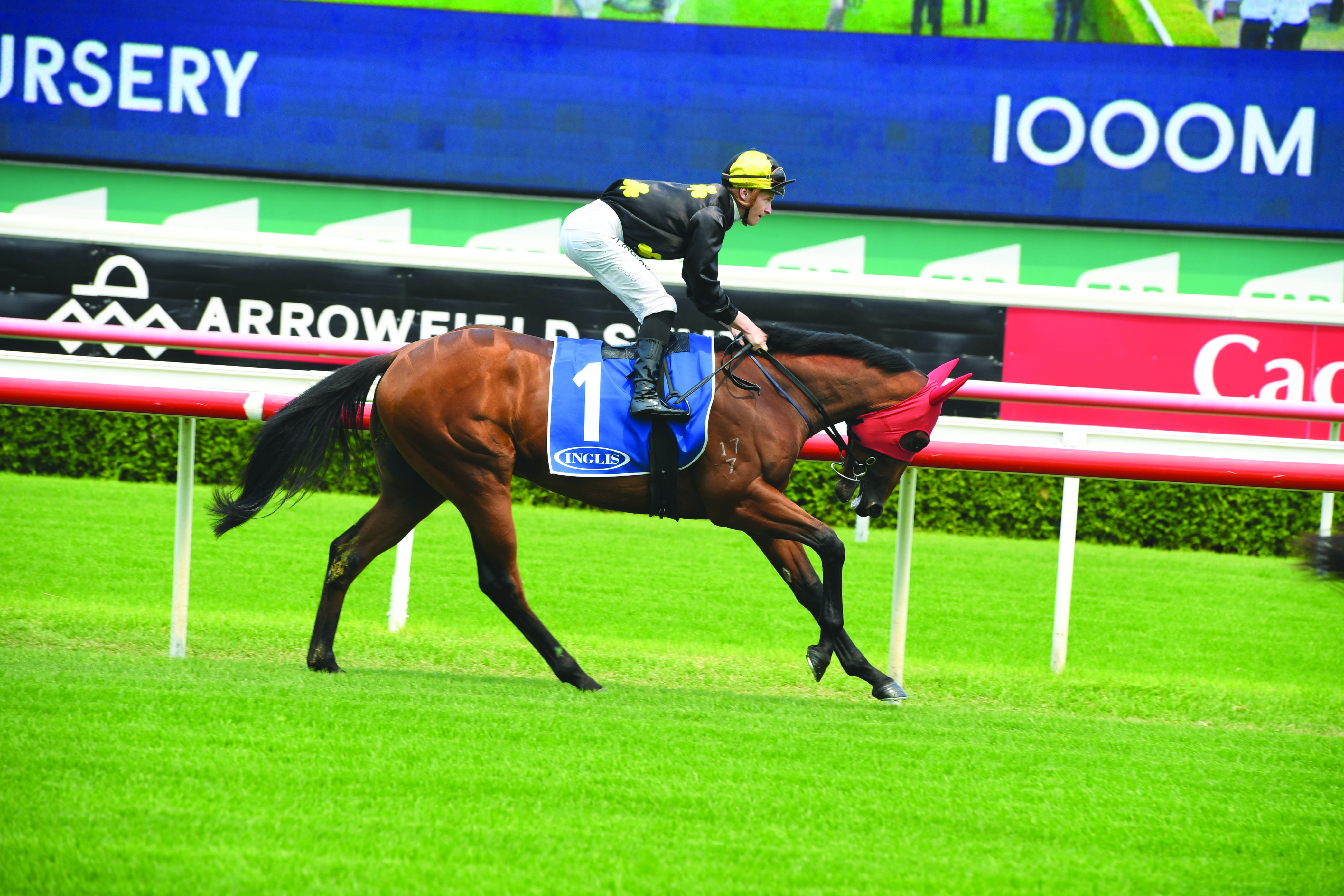 One of the stand-outs of Kingstar Farm’s 2019 Inglis Classic Yearling Sale draft, exciting colt Encountabull has hit the ground running, the first runner for his well credentialled sire Bull Point catching the eye finishing off strongly at his first two starts for the John Sargent stable.

Fourth in the Inglis 2Y0-Listed, 1000m at debut and second in the Nursery Stakes-Listed, Encountabull heads to the Inglis Millennium-Listed, 1200m at Warwick Farm in early February and success
would come as no surprise to Kingstar stud manager Adam Cook who always had plenty of time for the handsome bay.

“He is an outstanding colt would be a million dollar yearling if he were by Fastnet Rock,” he told Bluebloods last year. His price tag was not so lofty but he still sold well into good hands and there are other chances to secure a son or daughter of Bull Point at the 2020 Classic with Cook excited about the prospects of the stud’s Manfred Stakes-Gr.3, 1200m winner.

“He also has a very nice horse (Yourpoint) in New Zealand who won brilliantly at his first start and is being prepared for the Karaka Million,” Cook said, adding that Kingstar’s owner Matthew Sandblom is “over the moon” regarding the early promise displayed by the breed. A highlight of the stud’s 2020 Classic draft is a nice group of three Bull Point yearlings…

Lot 96 bay colt from Devils Arcade (Snowland):
“a beautiful colt” out of a stakes placed multiple city winner whose first four foals are all winners including the metropolitan winner Bel Diablo. Hailing from the family of the Singapore star Better Than Ever, “he has inherited much of his sire’s outstanding looks.”

Lot 135 bay filly from Fast Flowing (Dubawi):
“a powerful, early coming type,” she is out of a city winning mare who has made a great start to her broodmare career with her first foal being the terrific Perth mare Dance Music, a Listed winner who has been successful at six of her ten starts to date.

Lot 693 chestnut filly from Lady Of The Desert (Desert Prince):
her brother Itzhot, who has shown talent at his first two starts, fetched $160,000 at the 2019 Classic. “An outstanding filly who, should she have the talent to match her looks, could be a sprinting Queen,” she is out of a dual stakes winner. The remainder of the Kingstar draft is also strong with Cook noting that their Classic horses are always of a high standard.
“This is a sale that has really stepped up in recent years and the criteria of entry has increased, meaning that each of our Classic horses are above average. The overall quality of this draft is exceptional.”

Lot 260 bay filly by Star Turn from Lonhtime (Lonhro):
“a lovely filly who will attract plenty of attention,” she is the first foal for a four times winning half-sister to the Listed winner Boom ‘N’ Zoom.

Lot 296 bay filly by Astern from Megawatt (Shocking):
“our best Classic yearling, she is an outstanding filly who looks like an early type,” Cook said of the first foal for a Group Two placed half-sister to the Listed winner Pocket Diary.

Lot 441 brown colt by Capitalist from Sensitive (Street Cry):
“an eye-catching colt who has thrown a fair bit to Street Cry,” he is a grandson of the Listed winning high class broodmare Seances, dam of the Group Two winners Renaissance and Sessions and the Listed winner Haunted.

Lot 558 grey colt by Into Mischief from Whey Sauce (Kurofone):
“he is by America’s Snitzel,” Cook said of the stallion who commands a US $175,0000 service fee. This fellow is out of a Group Three placed mare who has already produced the Group Two placed Prioritize.

Lot 575 brown filly by Flying Artie from Abba (Pendragon):
“the nicest Flying Artie we have had on the farm,” she is out of a stakes placed mare from the family of superstar sprinter Black Caviar.

Lot 642 chestnut filly by Street Boss from Daughter O’Fortune (Hussonet):
“a beautiful filly by an underrated stallion,” she is out of a two times winning daughter of the dual Group winning sprinter Vocabulary.

Lot 650 brown colt by Exosphere from Eaudechloe (Dehere):
“a strong colt with his sire’s good looks,” he is a member of the prolific Eau D’Etoile family that has produced the big race winners Bint Marscay, Bollinger, Benicio, Kenny’s Best Pal, Stella Cadente
and Filante.

Lot 671 bay filly by Press Statement from Honey Flower (Bel Esprit):
“a well framed filly with good length and size,” she is out of a stakes winning mare from the popular Stage Hit family.

Lot 728 brown colt by Dissident from Picavino (Seidnazar):
“a nice neat colt, the first foal for a very fast mare,” he is out of a half-sister to the Group Three and Listed winner Ours To Keep. f