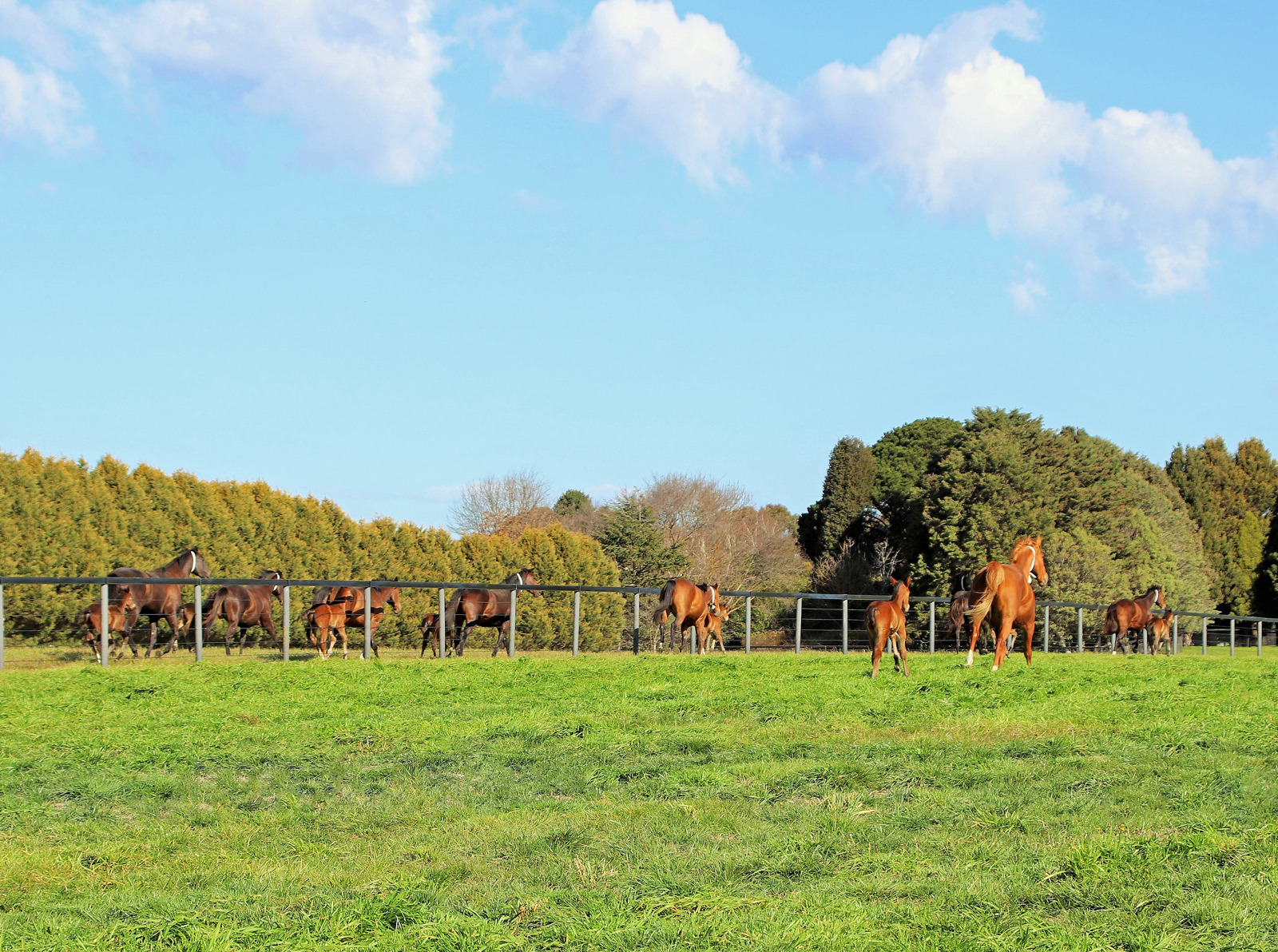 Lime Country Thoroughbreds will bring their third draft of yearlings to the Inglis Classic Yearling Sale in 2020, and in a short time, they have established themselves as sales vendors of the highest quality. Their initial draft of Classic yearlings have recently turned three, and already have four winners from five to race including Lord Kensington, who won on debut recently, and Golden Avenger placed on debut and won at his second start.

Jo Griffin said, “The reason we moved from New Zealand to the Southern Highlands was that the natural environments are similar, with big heavy frosts in winter, proper changing seasons, plenty of shade and abundant pasture in a normal season. The drought has caught up with us; water restrictions have meant pulling back on irrigation, and the cost of feed has gone through the roof. The Green Wattle Creek fire is 28km away from us, although we have a massive river boundary to offer some protection.”

At the 2020 Inglis Classic Sale, Lime Country Thoroughbreds will offer twenty-two yearlings making the draft one of the largest for farms who don’t stand a stallion at their property, including several yearlings as agent. “Lime Country has formed several partnerships with breeders who have fabulous farms of their own. The provenance of their stock and their breeding power is exemplary, and we are fortunate to have the honour of preparing their yearlings for presentation to the market. We visit all the horses during the winter and work together with our clients to ensure a smooth transition. For many of our owners, our proximity to Sydney is a massive upside as we are only an hour and twenty minutes from the airport, and we do have some room to further grow our resident broodmare base,” said Griffin.

Kia Ora Stud has entrusted Lime Country Thoroughbreds with the preparation of seven yearlings for the Classic Sale. “We are particularly pleased to have been entrusted for the first time in 2020 with the yearlings of such a renowned breeding establishment as Kia Ora. Mr Krishnan has an exceptional broodmare band and we look forward to presenting some standout yearlings for him at the upcoming Classic Sale,” said Griffin.

Kia Ora’s Bloodstock Manager Andrew Perryman said, “We see them as a highly professional outfit and look forward to them selling on our behalf.” Champion Sire Fastnet Rock has now clocked
up 150 stakes winners, and his yearling filly, Lot 366, is a half-sister to Gr.1 placed two year-old Chimboraa, and stakes placed winner Bravo Tango. Their dam is Pas De Deux (Sadler’s Wells), who is a full sister to stakes winner Kournakova, and a half-sister to Gr.1 winner Shake the Yoke, and Gr.3 winner Tropical.

Kia Ora’s Deep Field colt, Lot 410, is a half-brother to Gr.2 placed winner Unique Quality, out of Reggae (Danehill), who is a full sister to dual Gr.1 winner Spartacus, Gr.2 winner Johan Cruyff, and Gr.3 winner Meteor Shower. Out of Listed winner of seven races Warpath, Lot 555 is a Your Song half-sister to two stakes placed two year-olds including the promising Rotator who ran second in the Gr.3 Widden Stakes on debut.

By Sebring, Lot 419, is a filly out of a stakes placed winner Rock of Fortune (Fastnet Rock), making this yearling a half-sister to city winner Patch Baby, and Rock Hard who was unbeaten in three starts as a two year-old. Rock of Fortune is a half-sister to stakes winner Chic Choice, and to the dam of BRC JJ Atkins Plate-Gr.1 placed Kubrick who is a promising three year-old this season. Lot 339 is an All Too Hard colt who is the second foal of winning mare Nakataan (Zabeel) who is a half-sister to New Zealand Bloodstock Filly of the Year Fix, from the family
of triple Gr.1 winner Foreteller.

Swettenham Stud has entrusted Lime Country Thoroughbreds to sell two yearlings by its headline stallion Toronado at the upcoming Inglis Classic Sale. Swettenham Stud Sales and Nominations Manager Sam Matthews said, “This is our first time selling through Lime Country Thoroughbreds. We have been watching them closely for a while, and, for a farm that hasn’t had huge drafts, their averages have been enormous and that speaks volumes about what Jo and Greg are doing. They are incredibly attentive and they do an exceptional job.”

A chestnut colt, Lot 202, is the first foal of winning Fastnet Rock mare Irish Rose, who is a daughter of Champion 3YO Stayer in New Zealand and Gr.1 winner Bramble Rose who has been an exemplary broodmare, leaving six winners including Gr.2 winner Tangled, and Listed winners Sebrose, and Maules Creek.

The filly, Lot 399, is the third foal of winning Royal Academy mare Rainbow Queen, whose first foal to race is the Singapore winner Silver Joy, whose most recent win was in October 2019. This is a pedigree on the improve, with several currently racing horses under this filly’s second dam, Illusional, who is already the dam of two Gr.2 winners.

“The colt and filly we are offering on their behalf are excellent, precocious examples of this stallion’s stock and we feel they are the right physical types for this particular sale,” said Griffin.
In addition, Lime Country will present thirteen yearlings for other clients. Nature Strip launched Nicconi into the headlines, and Lot 547 is a daughter of Gr.1 Goodwood Handicap winner Velocitea (Volksraad), making this yearling a half-sister to stakes placed winner Limehills.

So You Think won Gr.1 races in both hemispheres and his progeny are equally proficient, and his yearling colt, Lot 46, is a half-brother to group placed winner of seven races, The Peak, out of a winning mare. Champion Sprinter and Royal Ascot winner Starspanglebanner’s colt, Lot 105, is the first foal of winning mare Doncella (High Chaparral), herself a half-sister to Gr.1 winner Fidelite, dam of Extremis. Another world travelling Gr.1 winner was Starcraft, and his colt, Lot 252, is out of Leica Forward (Charge Forward), who is a half-sister to Gr.1 winner Nothin’ Leica Dane.

Pride of Dubai kicked off his stallion career in style with an early two year-old stakes winner, Tanker, in his first crop, and Lime Country will offer two yearlings from his second crop at Classic. Lot 43
is a colt out of Western Australian Oaks winner Cassandara Shadow, who is a half-sister to Gr.1 winner Shoot Out and group winner I’m a Princess; while Lot 232 is a colt out of city winner Kiwi Kate (Pentire) who is a half-sister to San Bernardino from the family of Gee I Jane, Banchee, and Katy Lee.

Coolmore Stud Stakes winner Flying Artie’s oldest progeny are yearlings, and his colt, Lot 651, is out of a young half-sister to Gr.1 winner Redoute’s Dancer. Gr.1 winner Divine Prophet’s colt, Lot 561, is out of an imported American winning mare with a strong blacktype family. Everyone has been waiting for the first crop of American Pharoah, and Lime Country will present Lot 271, the first foal of an Encosta de Lago half-sister to group placed winner Sailing By.