Gr.1 winner and sire Charge Forward’s first Murrulla conceived crop are now yearlings, and he counts Gr.1 winners Response and Headway among his 19 stakes winners, and is the damsire of Golden Slipper winner She Will Reign. Tim Nolan said, “Having Charge Forward at Murrulla Stud has a been a fantastic opportunity. He’s all about precocious speed having won the Galaxy as a three year-old, run 2nd in the Slipper and now being the broodmare sire of a Slipper winner. You can pretty much send any mare to him and it will work.” 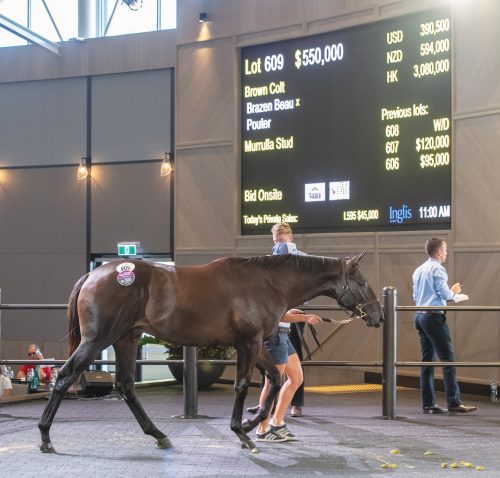 Murrulla Stud’s 2020 Inglis Classic Yearling Sale draft of 24 horses including five yearlings by Charge Forward, led by a filly with massive residual value as she, Lot 715, is a half-sister to Champion Hong Kong Stayer Liberator, as well as to the dam of recent Gr.2 winner Etana, while Lot 725 is a filly out of Pending Decision, a winning half-sister to tough group winner Decision Time. One pedigree for the line-breeding enthusiasts is Lot 802, a colt bred 2mx2f to Red Ransom.

“The Charge Forward yearlings look like early types, and all of them are very forward in their preparation. Obviously we had Brazen Beau sell in a past Classic draft, and he’s really kicked on at stud. More recently, Renewal, stakes placed Uratta Belle, and three year-old You Too who won on debut recently. The Inglis Classic Sale has always been good to us in terms of both sales results and racetrack results, so we keep coming back. Inglis always put together a strong buying bench for Classic. In 2020, we are bringing a good range of horses with different types to suit the wide variety
of buyers who attend.”

European Champion 2YO Colt Shalaa’s first crop includes Lot 248, a colt out of Latvian Amber, who won three races in succession and was thought good enough to run in stakes company, and is from the Verocative branch of the Zeditave family. A daughter of stakes winning mare Shekinaar by first season sire and speedster Winning Rupert is Lot 759, and she had speed to burn on both sides of her pedigree.

Japan’s Horse of the Year Maurice has a colt in the Murrulla Stud draft, Lot 361, who is the second foal of five-race winner Our Miss Bossy, who is herself out of a group placed Snippets mare. Champion 3YO Colt Flying Artie’s first crop are yearlings, and he is represented here by Lot 378, a colt who is the first foal of winning mare Possumnater. Snitzel’s group winning first season sire Sooboog is represented in this draft by Lot 622, a colt out of a half-sister to two year-old group winner Stripper; while first season sire Tivaci and Gr.1 winning sprinter has a colt, Lot 152, who is the first foal of an Ocean Park mare who is out of a half-sister to Singapore Horse of the Year Currency.

Four-time Gr.1 winner Criterion only sired two live foals in 2018, and so his filly, Lot 307, is a rare offering indeed. She is out of winning mare Miracletto (an omen name if there ever was one), and her half-sister Miracle to Me is the winner of three races, two as a two year-old. With Sunlight and many other in his first crop, the Zoustar’s are sizzling hot, and Lot 120 is a filly out of a winner producing Fastnet Rock mare from the family of She Will Reign.

Written Tycoon has been one of the golden finds of the stallion market, with the likes of Capitalist, and Written By, and Murrulla Stud have two of his colts for sale at Inglis Classic in 2020. Lot 110 is the third foal of winning mare Dwindle, a half-sister to recent group winner Tarquin; while Lot 78 is the second foal of winning mare Cosmic Debris, a half-sister to Malaysian stakes winner Monsili.
Cox Plate winner Adelaide kicked off his stud career in style with Gr.1 Flight Stakes winner Funstar this season, and his colt, Lot 798, is the first foal of tough racemare Alamonteel, who won seven races and was fourth in the Listed Tasmanian Oaks. Another sire who has started his stud career on a good note is Dissident, whose oldest crop are three year-olds and include stakes winner Pancho and Gr.1 placed Foxborough among his four stakes horses to date. The second foal of four-race winning mare Absolutelyanything, Lot 577 is his dam’s second foal, and this is the family of dual Gr.1 winner Dash For Cash.

Other sires represented in the Murrulla Stud draft are Casino Prince, Dissident, No Nay Never, Pierro, Press Statement, Smart Missile, Shooting to Win and Your Song.