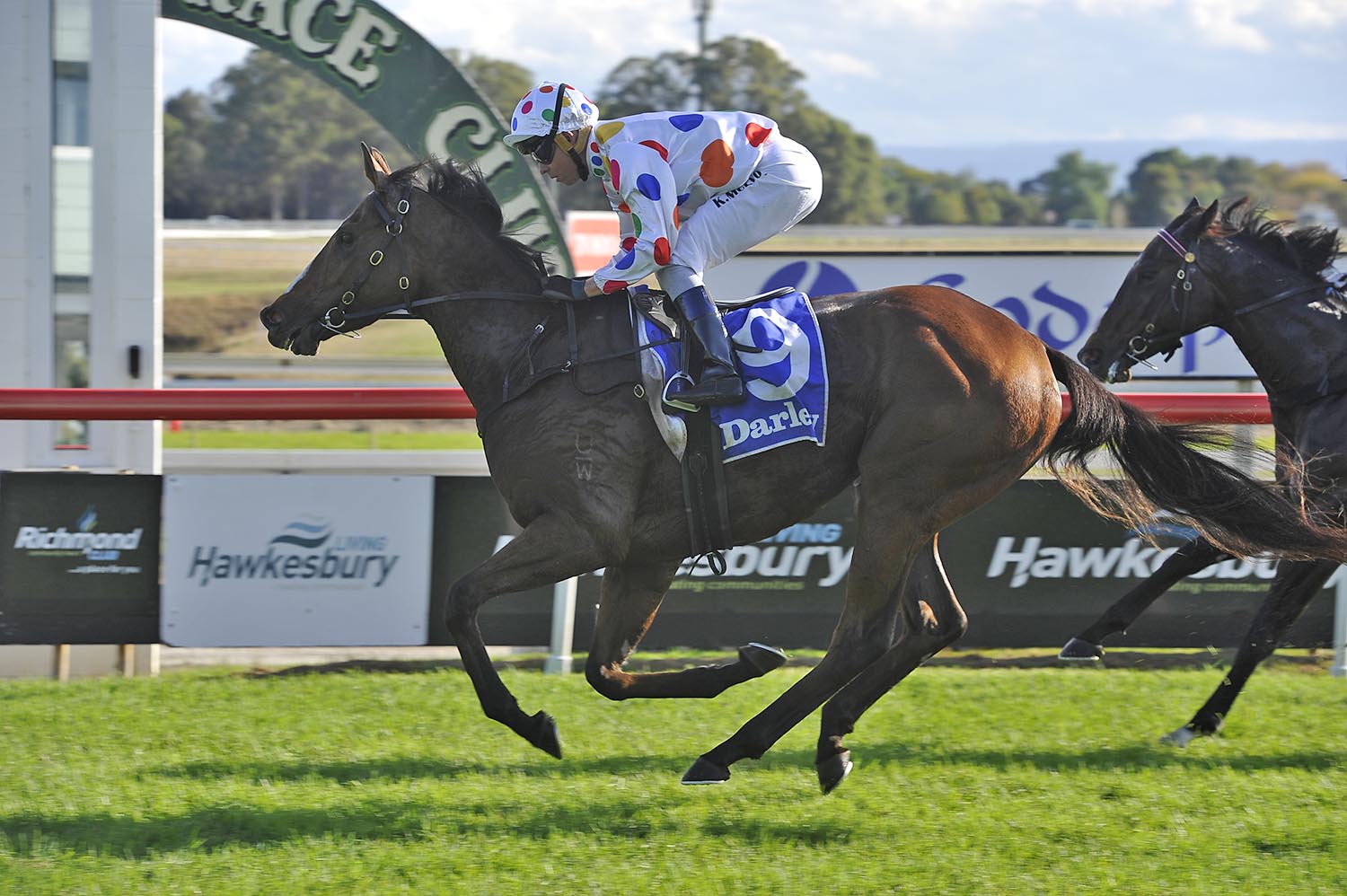 Perhaps the most freakish win in one of America’s Triple Crown races, in running sequence the Kentucky Derby, Preakness Stakes and Belmont Stakes, was the success of the Royal Charger colt Royal Orbit in the 1959 renewal of the Preakness (9.5f) at the Pimlico racecourse, Baltimore, Maryland. Movie mogul Louis B. Mayer bred the horse, but unfortunately he did not live to see him win the three year-old feature.

A review of the Preakness said Royal Orbit was caught unprepared at the start, broke sideways and bumped the side of the starting gate. He was a distant last as the field rounded the first turn but caught up entering the final straight. He then mowed the field down and careered away to win by a widening four lengths from subsequent iconic racehorse and sire Sword Dancer (by Sunglow). Dunce, a colt by Tom Fool, was three-lengths back in third.
The win in the Preakness and his efforts in the other Triple Crown races, the Kentucky Derby (fourth from the outside barrier, got away slowly, badly crowded early in the straight) and Belmont Stakes (third after being impeded by a fall), showed Royal Orbit was a top echelon three year-old. Tommy Lee (by Tudor Minstrel) and Sword Dancer filled the Derby quinella and Sword Dancer captured the Belmont.

A strikingly handsome chestnut, Royal Orbit won seven races, five at two, in a 20-start career and included in five seconds the Del Mar Futurity at two and the Santa Anita Derby at three. Modestly successful as a sire, he stood in Kentucky for 12 years, spent two in Ireland and then ended his days in Brazil. Louis B. Mayer bred Royal Orbit. The Russian-born pioneer Hollywood filmmaker, who co-founded the Metro Goldwyn-Mayer production company, was also major player in breeding and racing in California and Kentucky.

Mayer died when Royal Orbit was a yearling and may never have seen him as the colt was raised on one of Kentucky’s biggest studs, Spendthrift Farm. This operation, owned these days by B. Wayne Hughes, opened an Australian operation on the former Yallambee Stud at Romsey in Victoria last year. Spendthrift, long a major player in Kentucky, hosted Mayer’s Kentucky-based breeders, some sourced from the Australasia.

Royal Orbit was an American classic contender significant to Australasian breeding as his dam, unplaced Admiral’s Belle, was by another American star in War Admiral, and from New Zealand bred Belle Cane. The best three year-old filly in New Zealand in 1940, a year she won the New Zealand Oaks and Great Northern Oaks, Belle Cane was one of two mares, who along with their sire Beau Pere (GB), were purchased by Mayer near the end of 1940 and who arrived by ship at San Francisco the following January.

In 1947 Mayer acquired a Queensland-bred giant of Australian racing in Bernborough and had him installed at Spendthrift, a stud which also stood Shannon, a great Australian miler and setter of track records in America, and in the second half of his stud career Royal Orbit’s sire Royal Charger. He was purchased from the Irish National Stud when he was 11.

Spendthrift also had Beau Pere, a blue blooded son of the great stayer and stamina influence Son-in-Law and the English 1000 Guineas winner and Oaks second Cinna (Polymelus-Baroness La Fleche by Ladas), briefly in its stallion yards, losing him to colic at the age of 20 in 1947 not long after transfer from California, a region where he sired 21 of his 49 stakes winners.

The others came from use in New Zealand and Australia, two of four countries where he covered. The other was the land of his birth, England, and two seasons of use over very few mares there produced four or five foals. One of them, Mrs Goodsort, won a minor event in England at two.

Described as a big backward colt, the 1927-born Beau Pere was retired to stud at Newmarket, UK in 1932 on a fee of about $20 after being bought for 700 guineas ($1470) at a tried horse sale by an agent for the King George V. Unraced at two, he ended up with 11 career starts, three wins, two at 2800m, and about $2000 in prize money. Before his progeny raced, Beau Pere was re-offered at sale, selling for 100 guineas ($210) to John Donald of Westmere Stud, Wanganui New Zealand, a country where he was a sensational immediate success, claiming the Champion 2YO Sire titles in 1936-37 (debut year) and 1937-38 and the National Champion Sire honour in 1938-39 and 1939-40. Including his Australian runners, Beau Pere had 16 first crop two year-old winners.

Beau Pere stoodin four countries
TRAGICALLY for New Zealand, ill-health forced John Donald to close Westmere in 1937 and, after only three seasons, Beau Pere was sold to W.J. Smith, owner of St Aubins Stud, Scone NSW, for 3300 guineas ($6930) at a dispersal sale. He was one of three sires, along with Foxbridge (GB) and Balloch (GB), connected in bloodline who ruled New Zealand as Champion Sires for 15 successive years.

After the Beau Pere sire double, Foxbridge led 11 times, a still-standing domestic record, and then Balloch headed the list twice. A winner of one race in 18 starts, the Liverpool Atlantic Cup, but good enough to place up to Gr.1 level, Foxbridge was by the Luckless Son-in-Law product Foxlaw and from a mare who, like the dam of Beau Pere, was by a son of Cyllene. Foxlaw fractured a pelvis at two, later broke down when winning the Ascot Gold Cup and was put down after fracturing a leg at 13. A half-brother to Beau Pere, the other champion sire, Balloch, was purchased as an early two year-old for New Zealand’s Alton Lodge and went to stud unraced.

A son of Obliterate (Tracery), a high class two miler, Balloch shared with 12-years older Beau Pere being one of five sons of Cinna who became sires in this part of world after very limited or no demonstration of racing class. The others were Mr Standfast (GB) (by Buchan), a winner of one race and $200, unwanted when he stood briefly in Ireland and then used in New Zealand and finally Australia (at Alma Vale, Greenmount, Qld); Dink (GB) (1934, Nothing Venture), unplaced all five starts, at stud NZ and then at a F.W, Hughes’ stud at Tumut NSW; and the Gay Crusader product Gay Shield (GB). Another Cinna son, Mr Standfast’s older brother Buckler, a winner of the Gr.2 class Ascot New Stakes, sired some moderate winners from use in England.

Dink does not appear to have sired anything of consequence, but Gay Shield gained respect as the sire of the siblings Gay Blonde (won AuRC Railway Handicap, GN Derby, Guineas, Oaks, AJC Craven Plate, VRC LKS Mackinnon Stakes), Gay Sheila (won AuRC Guineas, Avondale Guineas) and Gay Sheikh (won North Island Challenge) and of their three-quarter sister Golden Sheila (won AuRC Champagne Stakes).
Cinna, the mother of these sires and all up of nine winners from 16 foals, was a superbly bred daughter of breed shaper Polymelus and Baroness La Fleche, a prominent English two year-old by Ladas, a half-brother to Heroic’s second dam Chelandry, and from La Fleche, a St Simon winner of the English 1000 Guineas, Oaks and St Leger). Cinna was inbred 3fx3f to Quiver, who was her third dam and also second dam of Polymelus. Quiver was a three-quarter sister to Carbine’s sire Musket. 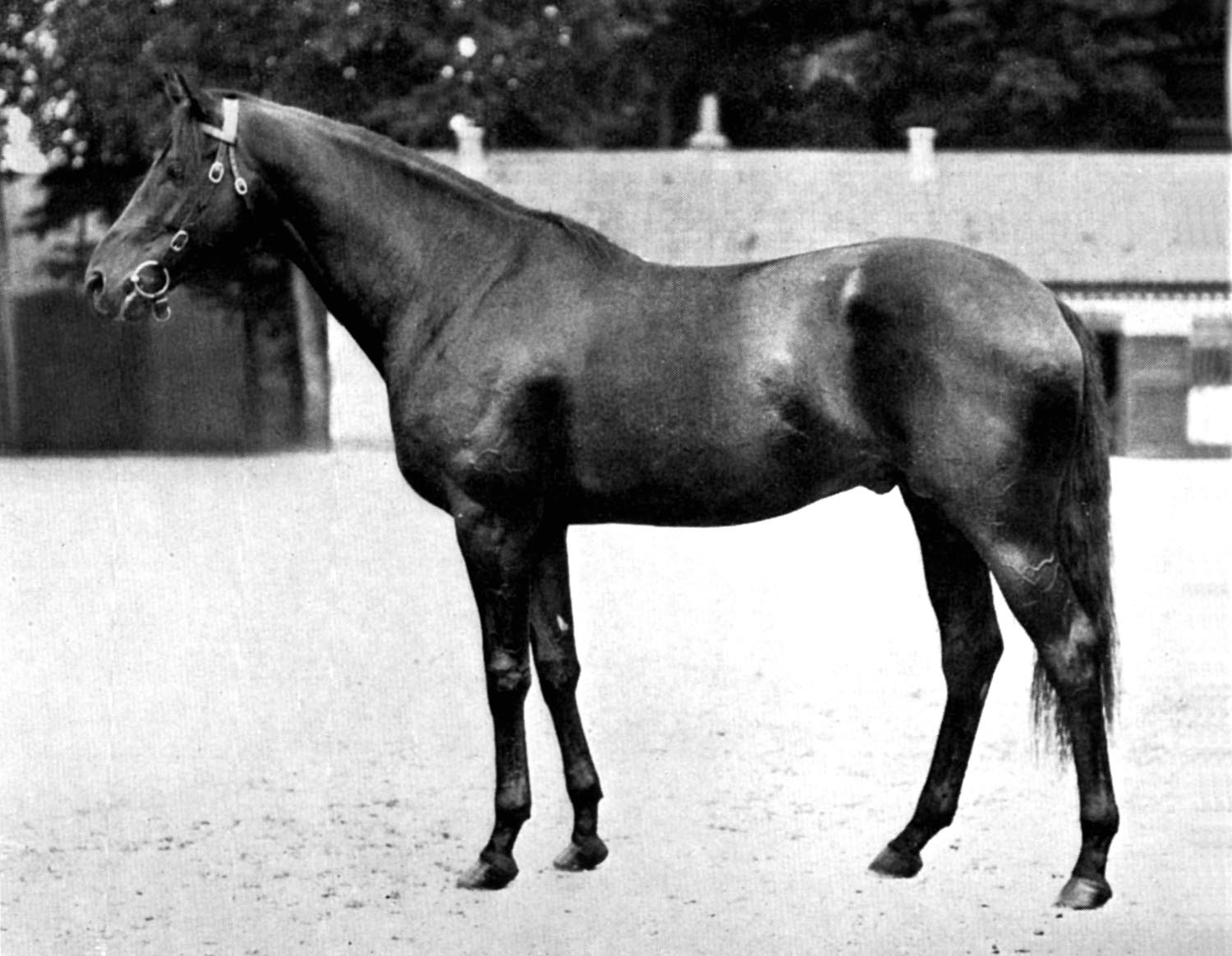 Nancy newest Cinna stakes winner
CINNA’S sons are well back in modern pedigrees, but her family keeps on throwing up good winners and broodmares. In fact the stimulant for this review is the success of the Mrs C.M. Upjohn-bred Nancy for the Snowden stables in the 2016 Godolphin Crown-Gr.3 at this year’s Hawkesbury Cup meeting. Cinna is Nancy’s ninth dam.

Her exported daughter Sugar Kandy (GB) only produced two foals, but they were the Neptune (GB) (Hyperion) sisters and classic champions Sweet Nymph and Sweet Spray. Both also became esteemed matriarchs. Sweet Nymph won the Great Northern Derby, New Zealand Oaks and WRC Gloaming Stakes and Sweet Spray won the Great Northern Derby and Oaks, also the New Zealand Oaks and placed second in the Auckland Cup.
Sweet Nymph is the sixth dam of Nancy and ancestress of about 20 other stakes winners, including ill-fated Dulcify, a Decies (IRE) gelding who won 10 races, including the VRC Victoria Derby, AJC Derby, MVRC W.S. Cox Plate, by a record seven lengths, VRC LKS Mackinnon Stakes, Australian Cup and STC Rosehill Guineas, and who at four in the spring of 1979 was put down after fracturing a pelvis while contesting the Melbourne Cup. A $3250 yearling, he was owned and trained by Colin Hayes

Another daughter of Cinna imported to New Zealand, a country in which she won twice and third placed in a major, the Telegraph Handicap, was Celebrity (GB) (by Nothing Venture). She went to Neptune and produced Davey Jones (won AJC Epsom, Wanganui Guineas, second AJC Doncaster; sire) and his sisters Celebration, Illustrious and Celebrated. Celebration is the third dam of Triton (13 wins, AJC Epsom, All-Aged Stakes, QTC Stradbroke) and Illustrious is the second dam of Waft, a mare inbred 3fx3f to Cinna who went to Le Filou (FR) and produced Kind Regards, a winner of the Great Northern Oaks.

Vice Regal, a very good sire in a long career in NZ, included among his progeny Regal Advice, a winner of five races, including the QTC J.J. Atkins Classic (2YO) when it was known as the Castlemaine. Used at stud in Queensland, Regal Advice supplied the Brisbane-winning sisters Miss Sandman (12 wins, stakes placed) and Advisable (six wins).

Miss Sandman has produced eight winners, including Show a Heart, a Brave Warrior (Star Kingdom male line) winner of four Gr.1 and, from use at Glenlogan Park, five times Queensland Champion Sire. One of Advisable’s foals is Any Suggestion (by Lion Hunter), a Brisbane Listed winner, a second placegetter in the MVRC Australia Stakes-Gr.1 and a sire of stakes winners in New Zealand. Probably uniquely, Show a Heart and Any Suggestion carry three lines of Cinna through their dams. Besides the double in Vice Regal, their bottom line goes back four generations to Te Poi, an AJC Doncaster Mile-Gr.1 winner out the Cinna grandaughter Celebrated who also produced Grand Scale, a winner of the Adelaide Cup and Moonee Valley Cup.

There have been many other good performers around the world from the Cinna family, including the giant of Japanese breeding Sunday Silence (USA). A Kentucky Derby and Preakness Stakes winner and Belmont Stakes second, Sunday Silence was by the Hail to Reason sire Halo and from a branch of Cinna established by Marcellina, a daughter of Figaro (Colorado), a very good English handicapper (Ayr Gold Cup and Stewards’ Cup at 6f) but a modest sire and the earlier-mentioned Belle Mere (Son-in-Law-Cinna).