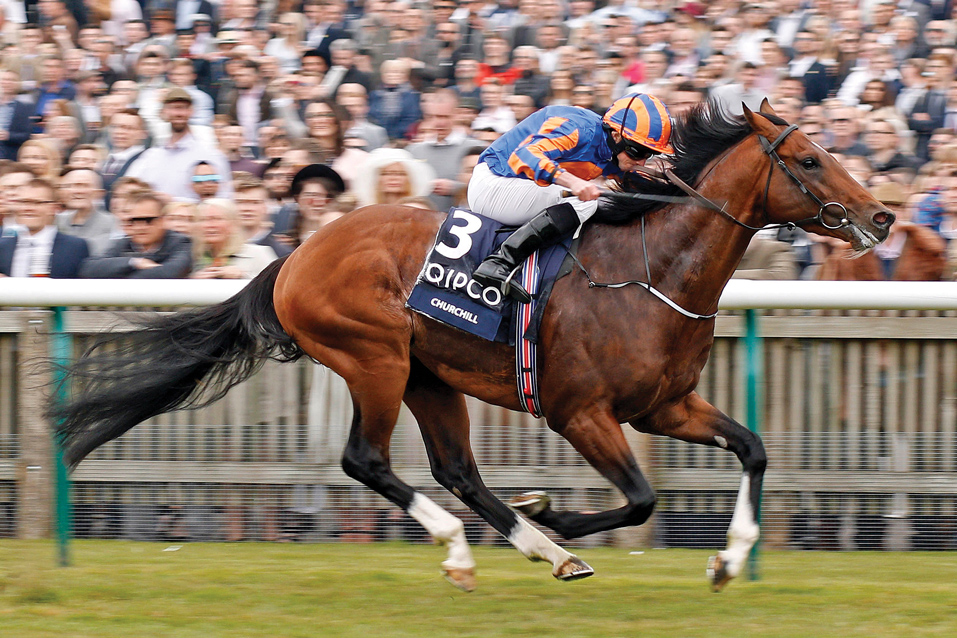 COOLMORE’s commitment to the male lines of Sadler’s Wells and Storm Cat runs deep, so it’s no surprise its new high profile shuttlers to Jerrys Plains this year have pedigrees reflecting this. The four-time Gr.1 winner Churchill (IRE) is a son of Galileo (IRE) and from a Storm Cat mare, while brilliant sprinter and dual Gr.1 winner Caravaggio (USA) is by Scat Daddy, a great-grandson of Storm Cat.

That seems generous for a horse with Churchill’s pedigree and credentials and he is certainly among the better racehorses to shuttle here. He won seven of his 13 starts and was once second, twice third and once fourth, all but one of his placings coming in Gr.1 events. He was third at 6f first time out at two and then won his remaining five starts for the year, collecting the Listed Chesham Stakes (7f) at Royal Ascot), Tyros Stakes-Gr.3 at Leopardstown (7f), Futurity Stakes-Gr.2 (7f) at the Curragh, National Stakes-Gr.1 (7f) at the Curragh and Dewhurst Stakes-Gr.1 (7f in 1:23.80) at Newmarket on tracks rated from soft to good for trainer Aidan O’Brien. He was rated Champion 2YO Colt in Europe and in GB/IRE.

He started off in similar fashion at three, stretching his unbeaten sequence to seven with wins in the English 2000 Guineas-Gr.1 (8f), beating Barney Roy and Al Wukair (length, neck), giving his trainer a record eighth victory in the classic, and in the Irish 2000 Guineas-Gr.1 (8f), beating subsequent Dubai World Cup victor Thunder Snow into second by 2.5 lengths. Barney Roy had the upper hand next time out and Thunder Snow was third when Churchill placed fourth in the St James’s Palace Stakes-Gr.1 (8f) at Royal Ascot. He was then second to Ulysses in the York International-Gr.1 (10.25f), with Barney Roy third and then seventh of 10 in the Irish Champion Stakes-Gr.1 behind Decorated Knight after being trapped in a pocket and unable to make a run until way too late in proceedings. He performed well in very soft conditions against the older horses next time out when third to Persuasive and Ribchester in the Queen Elizabeth II Stakes-Gr.1 (8f) at Ascot. However, the dirt surface and the trip to the US proved a bridge too far for Churchill who was seventh of 11 in the Breeders’ Cup Classic-Gr.1 (10f) behind Gun Runner, a race where his sire was also unplaced a few years earlier.

Retired to stud in Ireland after that race on a fee of €35,000 and one of six sons of Galileo on the flat roster at Coolmore, Churchill, who was rated 126 by Timeform at three and described as “big and strong” in Racehorses of 2017, was Champion 3YO in Europe, GB and Ireland in 2017, earning a World Thoroughbred Ranking of 123.

He became the third winner of the English 2000 Guineas for his sire, after Frankel (dam by Danehill), who was unbeaten in 14 starts (Timeform 147) and Gleneagles (dam by Storm Cat) and was one of three classic winners by the sire in 2017, his three year-old daughters Winter (dam by Choisir) winning the English and Irish 1000 Guineas among four Gr.1 victories and Capri (Anabaa) claiming the Irish Derby-Gr.1 and English St Leger-Gr.1. Galileo’s 267 stakes winner also include the iron horse and international champion Highland Reel (dam Hveger (AUS) by Danehill, second dam by Marscay), a seven-time Gr.1 winner also raced by a Coolmore Syndicate, who will shuttle to Swettenhem Stud in Victoria in 2018 on a fee of $16,500.

In the essay on Churchill in racehorses of 2017, the Timeform staff had this to say about Galileo; “Galileo still tends to be thought of as mainly a sire of middle distance performers and stayers. In fact, Galileo has sired winners of all six of the Guineas races in Britain, Ireland and France, and, also taking account of the lengthy list of Gr.1-winning two year-olds he has had, he must be regarded as a particularly versatile, as well as the best, stallion of his era”. On Churchill’s prospects at stud Timeform noted; “Churchill was a good winner of the 2000 Guineas, if not an outstanding one, and his two year-old achievements, including a Royal Ascot win and two Gr.1s, will add to his appeal to commercial breeders who look certain to give him strong support in an era when the fashion in the stallion market is for sires likely to produce winning two year-olds and sprinter milers.”

Churchill’s stakes winning dam Meow was second in the Queen Mary-Gr.2 at Royal Ascot and won twice in five outings at two (all 5f) for David Watchman including a Listed event at the Curragh. The speedy daughter of Storm Cat (whose fee was $US500,000 when she was conceived) is out of the 2002 Cheveley Park-Gr.1 winner Airwave (Air Express-Kangra Valley by Indian Ridge), rated Champion GB 2YO that year and Champion 3YO Filly Sprinter in 2003 when she won the Temple Stakes-Gr.2, was runner-up to Choisir in the Golden Jubilee-Gr.1 and third in the July Cup-Gr.1 and Haydock Sprint Cup-Gr.1. Among her six career wins (5f-8f) were also the Curragh Ridgewood Pearl Stakes-Gr.2 and the Sandown Temple Stakes-Gr.2. Meow is also dam of Clemmie (Galileo), Champion 2YO Filly of Europe, GB/IRE in 2017 after winning the Cheveley Park-Gr.1, the Duchess of Cambridge Stakes-Gr.2 and Curragh Grangecon Stud Stakes-Gr.3.

The Galileo-Storm Cat cross is proving lucrative one for Coolmore and there is room for line breeding to Storm Cat and his sire Storm Bird using Churchill, given that several from the line have stood here, notably Johannesburg (USA) and his sire Hennessy (USA) (by Storm Cat) and Bluebird (USA) (Storm Bird). Mares who also combine the blood of Danehill should prove effective, given that line’s success with Galileo, notably via Danehill, his son Fastnet Rock and grandson Choisir.

Redoute’s Choice (Danehill) could be a good option too as his second dam, Dancing Show, is a daughter of Nijinsky (pedigree similarities to Storm Bird) and from a mare by Sir Ivor (whose sire Sir Gaylord is a half-brother to Storm Cat’s dam sire Secretariat), while that horse’s champion sire son Snitzel has a second dam by Storm Bird and Snitzel’s three-quarter brother Hinchinbrook is a son of Fastnet Rock.

It’s worth remembering that Miss Finland, a champion daughter of Redoute’s Choice, has a second dam by Sadler’s Wells and the sire also has Gr.1 winners out of daughters of Encosta de Lago (whose sire is a brother to Sadler’s Wells), so the pointers are there. Daughters of Nijinsky’s son Royal Academy (USA), a close relative of Storm Cat, are also an option and note Churchill already has a line of Nijinsky as that horse’s son Caucasus is dam sire of Air Express (IRE).

Churchill’s second dam, Airwave, a daughter of Gr.1 winner and short-lived sire Air Express (by Salse, a son of Topsider who traces to Rough Shod, as does Sadler’s Wells), also has two stakes winners by Galileo in Aloof and Orator, while third dam Kangra Valley (Indian Ridge-Thorner Lane by Tina’s Pet) produced the Nunthorpe-Gr.1 winner Jwala to Oasis Dream, whose sire is Green Desert (Danzig-Foreign Courier by Sir Ivor). The Green Desert line is alive and kicking in Australia thanks to the astonishing success of I Am Invincible, whose sire Invincible Spirit is by Green Desert. Son of Green Desert like Cape Cross, Desert Sun and Volksraad also had success here and their daughters are readily available and these “non-Danehill” lines of Danzig, perhaps also considering other Danzig sons like Anabaa and Langfuhr, should also work. Remember, Urban Sea has also produced a champion to Cape Cross, so there is affinity on both sides of Churchill’s pedigree to Green Desert.

Churchill’s fifth dam Spinner (Blue Cashmere-Penny Pincher by Constable), a half-sister to very tough sprinter and sire Clantime (Music Boy), was listed as a “vehicle mare” in the GSB and this allowed her progeny entry into the general stud book. This is family 19a and the pedigree anomaly comes via the male line of Spinner’s fifth dam No More and of course is of little note today as it is so remote in this pedigree.