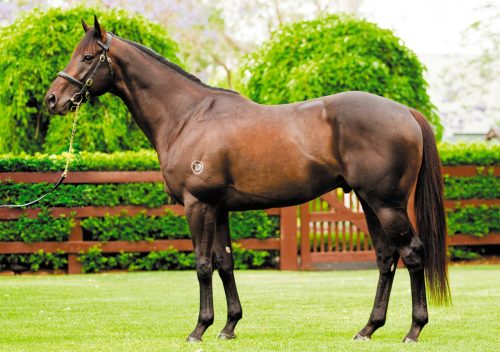 WITH the season all but over, it’s an interesting time to reflect on the second crop sires. While they fall into what might be a predictable order, perhaps the most interesting trend is, just as with So You Think and third crop sires, that the leader is a horse who is providing a classic outcross for Danehill.

Pierro (Lonhro–Miss Right Note by Daylami) would have been the obvious standout of this group going in, and after nearly two complete seasons, that expectation has been borne out. Pierro was, perhaps, faster and more precocious than his pedigree might indicate, he was a juvenile Triple Crown champion at two, and the top-weighted sprint colt on the international classifications at three, but as a sire, appears to be more reflecting his pedigree. The best of his nine stakes winners are the classic-winning Levendi and Pinot, who have won up to 2400m and 2500m respectively. His son, Action, took the WATC West Australian Derby-Gr.2 at 2400m too, although Group winners Tulip and Pierata, are much speedier.. There is a good chance that this is primarily a consequence of breeders looking to Pierro to put speed into mares, but finding that he’s responding to middle-distance characteristics instead. I would expect to find plenty of speedy and precocious offspring if he’s sent mares who are bred for speed throughout their pedigree.

One horse who achieved a win over Pierro is All Too Hard (Casino Prince–Helsinge by Desert Sun), who defeated that rival in the Caulfield Guineas-Gr.1.

A grandson of Flying Spur and a half-brother to Black Caviar, All Too Hard has four stakes winners in his first crop of three year-olds, and another in his second. They include Villermont, who was successful in the MRC Sandown Guineas-Gr.2 and BRC Gunsynd Classic-Gr.3 and Demonetization, winner of the ARC Great Northern Guineas-Gr.2. Two of the stakes winners are out of mares from the Zabeel line, Demonetization out of a mare by Zabeel himself, and stakes winner Curdled, out of a mare by Lonhro. Villermont is out of the major runner and producer, Bollinger, a daughter of Dehere and Bint Marscay. Listed winner All Too Huiying is out of a mare by Perugino, a son of Danzig, where All Too Hard is a Danzig/Danzig cross. From his second crop, Unfair Dismisal (out of an Exceed and Excel mare, and not only another cross over Danzig, but a Danehill/ Danehill cross) So far they seem best at around a mile, and have been better at three than two.
The handsome Your Song (Fastnet Rock–Zembu by Fuji Kiseki) gained a Gr.1 win at three, taking the BRC BTC Cup-Gr.1. He has 49 first crop winners, five stakes horses, including the Listed scorer Split Lip, who is out of a mare by Blevic, so bred on an extended version of the Fastnet Rock/Sadler’s Wells cross.

He’s very much a sprint sire, but his offspring improve with age.

Another whose offspring seem to be following the progressive trend is Ocean Park (Thorn Park-Sayyida by Zabeel). He was a stellar middle-distance performer most notable in taking the MVRC W.S. Cox Plate-Gr.1 over All Too Hard and Pierro, the MRC Underwood Stakes-Gr.1, Caulfield Stakes-Gr.1, New Zealand Stakes-Gr.1 and Hawkes Bay Makfi Challenge Stakes-Gr.1. Ocean Park is from the prematurely deceased New Zealand Champion Sire Thorn Park, by Nureyev’s son, Spinning World. The dam is by Zabeel, who is out of a Nureyev mare, so giving that horse 3mx4f. Ocean Park has 38 first crop winners, six stakes horses, including stakes winner Ocean Jewel (whose dam is by Danehill from the Eight Carat family, meaning she’s similarly-bred to Commands and Danewin), as well as the BRC Queensland Oaks-Gr.1 second Another Dollar, out of a mare by Pins and the New Zealand Derby-Gr.1 second Mongolianconqueror, out of a mare by The Jogger, a son of Danzig.
A Kentucky Derby-Gr.1 and Dubai World Cup-Gr.1 winner with excellent form on turf, and by a Blushing Groom line stallion from a Germany family, Animal Kingdom (Leroidesanimaux-Dalicia by Acatenango) represented something different on both performance and pedigree. It’s probably going to take a little more time before the best is seen of his runners, but he does have 28 individual winners, four stakes horses including stakes winner Peaceful State, whose dam
is by Helissio out of a mare by At Talaq. He also has a pair of stakes placed horses out of Redoute’s Choice mares, including the SAJC South Australia Fillies-Gr.3 and Schweppervescence Stakes-Gr.3 second Earth Angel. Animal Kingdom does also have four stakes winners from his first US crop, currently halfway through their three year-old season, including the Graded stakes winner and Gr.1 placed Untamed Domain, whose dam is by Lear Fan out of a Nureyev mare, something of a reverse cross to the dam of Peaceful State (Fairy King/Roberto and Roberto/Nureyev).

Yet another on this list who is more tilted to the later developing tag is Reliable Man (Dalakhani–On Fair Stage by Sadler’s Wells). Reliable Man proved his talent in both hemispheres by winning the French Derby-Gr.1 at only his third start and taking the ATC Queen Elizabeth Stakes Stakes-Gr.1 in Australia. He’s by the French Derby-Gr.1 and Prix de l’Arc de Triomphe-Gr.1 victor Dalakhani and his dam is a stakes winning daughter of Sadler’s Wells and the English and Irish Oaks (both Gr.1) heroine, Fair Salinia.

Reliable Man has been represented by stakes winner Main Stage (out of a mare by Prized), but it’s also worth noting that his five stakes placed horses have all achieved that feat in Group events, among them the WRC Levin Classic-Gr.1 second Belle du Nord (dam by Volksraad) and the VRC Victoria Derby-Gr.1 second, and ATC Spring Champion Stakes-Gr.1 third Sully (out of a mare by Casual Lies, the same cross with a Roberto line mare as Main Stage). Reliable Man also has two Group winners, both two year-olds, from his first northern hemisphere crop (now three).

Frost Giant (Giant’s Causeway–Takesmybreathaway by Gone West) is something of an anomaly, as he has stood several seasons in New York in the northern hemisphere and also shuttled to South America.

The chestnut started his career in Ireland, where he was a Group winner from seven furlongs to a mile at two and three, and he took the Suburban Handicap-Gr.1 over 10f on dirt in the US. A solid sire in the NY-bred program, he also has Graded winner Giant Expectations among his North American runners. In Australia, where he left two crops (95 live foals), he has a smart second crop runner in the WATC Karrakatta Plate-Gr.2 captor Valour Road (out of a mare by Street Sense).

A champion at two in South Africa, Delago Deluxe, won three Graded stakes as a juvenile, including the Gold Medallion Stakes-Gr.1 and followed up with a tally in the Golden Horse Casino Sprint-Gr.1 at three. He is by Encosta de Lago out of Succeeding, a Flying Spur half-sister Duporth, Excites and Tickets, all out of the six-time Group winner Staging.

No black-type scorers yet, but there are 24 winners in his first crop.Certainly the best runner from his sire’s reverse shuttle crops, Excelebration (Exceed and Excel-Sun Shower by Indian Ridge) numbered the Queen Elizabeth II Stakes-Gr.1, Prix du Moulin de Longchamp-Gr.1 and Prix Jacques le Marois-Gr.1 among his six Group wins, and his record would be more impressive still had he not so often been the tail to the magnificent comet that was Frankel, finishing second to that horse four times, thrice in Gr.1 events. In his first southern hemisphere crop Excelebration has stakes winner Saint Patricks Day out of a mare by Dehere (second dam by Danasinga, giving inbreeding to Danehill) and stakes placed Exceltic (dam by Shamardal). From his first two northern hemisphere crops he has another four stakes winners, including the St James’s Palace Stakes-Gr.1 victor Barney Roy, who is out of a mare by Galileo.

Mention of the Excelebration’s pursuit of Frankel brings us to Frankel’s three-quarter brother, and frequent pacemaker, Bullet Train (Sadler’s Wells–Kind by Danehill) in 10th among the second season horses. He has 20 first southern hemisphere crop winners, including the stakes placed Egyptian Bullet (out of Choisir mare) and he does have a stakes winner from his US crops in the shape of Whiskey Train (out of mare by Roar).

Further down the list, Melbourne Cup-Gr.1 hero Americain (Dynaformer-America by Arazi) has 20 winners, including the Group placed horses Amerock (dam by Zabeel) and American Joy (dam by Royal Academy), as well as northern hemisphere stakes winner Causeforcommotion (out of a Giant’s Causeway mare). Golden Archer (Rock of Gibraltar–Viennetta by Pins) has 21 winners from 38 first crop runners, and already has nine two year-old winners in his second crop; Squamosa (Not a Single Doubt–Class Success by Success Express), who is making the most of relatively limited opportunities, has 15 winners from 35 starters, including stakes winner Kiwi Ida (out of Blevic mare) and three stakes placed horses (two out of daughters of Commands); the late Azamour (Night Shift–Asmara by Lear Fan), an excellent sire in Europe, was represented by Aloisia (dam by Perfectly Ready), successful in the MRC 1000 Guineas-Gr.1 and Group winner Azaboy (dam by Manntari) in one crop; the well-bred Needs Further (Encosta de Lago-Crowned Glory by Danehill) has two stakes winners. His speedy two year-old Mystic Journey is out of a mare by Colombia (Zabeel-Eight Carat), so inbred to Zabeel’s dam Lady Giselle (third dam of Needs Further). This also gives Fairy King with two crosses of his three-quarter brother, Nureyev. n