In the Thoroughbred breeding industry the word longevity is rarely used positively unless accompanied by its counterpart, success. Such a truism can be said of George Altomonte’s Corumbene Stud at Dunedoo. With the 40th anniversary of the stud’s inception on the horizon, George and his team can look back with pride at the quality of horses to have come off the farm, and look forward with positive expectation that amongst the crops to follow will be many horses of the same ilk.

“It’s with that “pedigree of success” behind them that the Corumbene team will again head to the Gold Coast with an outstanding draft.”

Most studs dream of breeding a Golden Slipper winner. Corumbene has bred two and raced another that was placed third, a remarkable achievement given the farm focusses on quality over quantity. Corumbene bred Sebring and sold him out of the Magic Millions Gold Coast ring back in 2007 and then won the Slipper in 2013 with their homebred filly Overreach. A Corumbene – Magic Millions purchase in Hasna had previously been placed in the Slipper before winning the AJC Sires’ Produce and the Champagne Stakes. Corumbene also bred and sold the Blue Diamond Stakes winner True Jewels while they bred and raced the Gr.1 The Metropolitan winner Heart Ruler.

Stud Manager Toby Frazer, having now been at Corumbene for nineteen years, thinks their 2019 Magic Millions draft is of comparable quality to any previously sent
to market. “We’ve nine Book One lots, and fourteen overall and they are all types I’d like to take home myself.”

Pushed to offer his pick of the bunch he plumped for the Exceed And Excel colt out of the Gr.2 Light Fingers Stakes winner Bennetta as his favourite. “The mare was top class and you can see a lot of his sire in this colt. Also, his Snitzel half-brother was passed in last year so we’ve retained him to race. Now named Bottega he has done everything right so far and we have high hopes for him.” 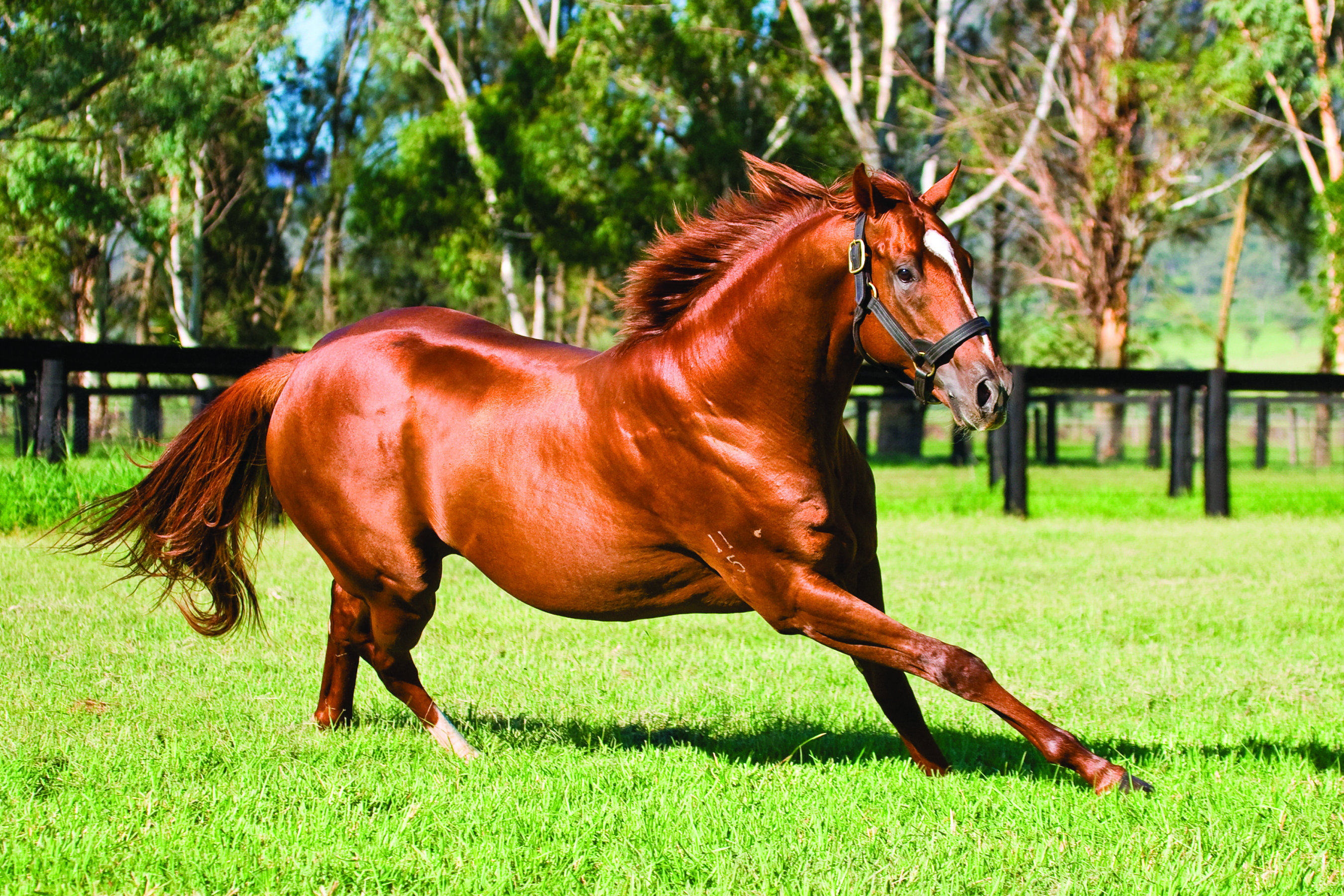 Speaking of the draft lots by established sires Toby said “We’ve a pair of fillies by More Than Ready that will be popular and are both typical of their sire. The filly out of the winning Flying Spur mare Wings Of Success is a lovely moving girl, very leggy while the one out of Icedginger is a half-sister to our Listed Fireball Stakes winner Samantha, from the family of True Jewels and also a very nice type.

We’ve another filly by Not A Single Doubt out of a Charge Forward mare in Avanzar. The sire just keeps on delivering and everybody wants to get to Charge Forward
as a broodmare sire after producing two Golden Slipper winners in a row in She Will Reign and Estijaab. Add to that this filly is a flashy chestnut with the blonde mane and tail of some of Not A Single Doubt’s good ones, like Miracles Of Life, MM winner Karuta Queen and Mighty Boss, and she looks a complete package.”

Corumbene have also supported a number of young stallions the fruits of which will be on display at Bundall led by a pair of yearlings from the second crop of Champion Miler Dissident. “We’ve a big opinion of Dissident as a stallion and I think he’s a certainty to be a success. His colt out of the High Chaparral mare Annalee is a lovely type from a family that produced the Stakes performers Miss With Attitude and Oui Si Attitude. His filly out of Mossarama comes with the pedigree to match her good looks being out of a half-sister to Staging, the dam of the Gr.1 winners Duporth and Excites and the Gr.2 winner Tickets.

The stud will also offer lots by other second season sires in Rubick and Brazen Beau. “The Rubicks have proven to be early comers and I’d expect that to be the case
for our pair. We have a filly in Book One out of Alessia, a Charge Forward half-sister to Bennetta, which we expect to be popular while the colt in Book Two is a nice
type being out of Olive Com, a winner from the family of the great Northerly.

The Brazen Beau colt is not an overly big horse, very much in the mould of his sire, but from a family that produces winners, his dam Little Miss Bourke having won four
times herself.”

With good reason Corumbene also strongly supported Outreach, the highly talented full brother to Overeach who carried the Altomonte silks just the once when second to subsequent Golden Slipper winner Vancouver in the Listed Canonbury Stakes.

“He was just unlucky to break down in that first run otherwise we might be talking about him as the top of his crop and a hot prospect as a First-Season Sire. There’s
no reason to doubt he won’t prove to be a success at stud; he showed in that lone run he was amongst the best of his year, he’s a full brother to a Champion and his close relation Reward For Effort has a handful of Stakes winners to his credit. As a stallion he has thrown lovely types, comparable with some of the better stallions on the market and we are delighted with all three fillies we will offer.”

The current drought has affected studs across the country but Toby feels Corumbene were able to mitigate its bite somewhat through growing their own crops. “It has been tough for everyone, but we’ve been able to grow our own good quality oats and lucerne and that has allowed us to weather, pardon the pun, the drought very successfully. In the long run it might prove advantageous for our offerings.” l