Lime Country Thoroughbreds will bring their third draft to the Inglis Easter Yearling Sale in 2019, and it is their biggest yet with ten colts and five fillies. Previously based in New Zealand, before shifting to the Southern Highlands of NSW, Lime Country sold the 2018 Gr.1 New Zealand One Thousand Guineas winner Media Sensation (I Am Invincible) from their final New Zealand draft. 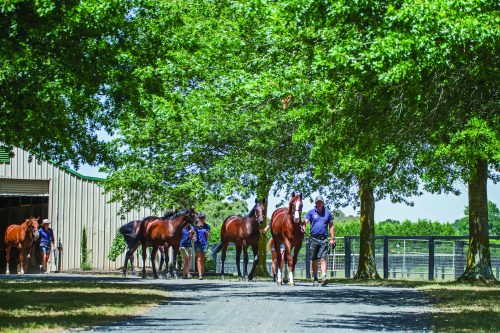 Jo Griffin spoke to Bluebloods about their draft. “A lot of people look for boom stallions in an Easter draft, and while we have Snitzel and Not a Single Doubt flying that flag, this is a draft of excellent types and top quality female pedigrees.”

Starspangledbanner flew the flag for Australia overseas adding the Gr.1 July Cup and Gr.1 Royal Ascot Golden Jubilee to his two Australian Gr.1 wins, and Lot 31 is his half-brother by proven sire Not a Single Doubt from stakes placed Gold Anthem. “His half-brother, Aussie, the two year-old from Gold Anthem won last week, and ran fifth in the Gr.3 Blue Diamond Prelude at the start before that. Starspangledbanner was rated the best sprinter in Europe, Great Britain, Ireland, and Australia — if you think about how many foals were born across the world to compete against him, that’s an outstanding feat. This pedigree page includes eight horses currently racing, such as stakes placed Barood. This colt is bred on the same cross as Starspangledbanner and Barood, and his siblings are sprinting types. Lot 31 looks the same — a sprinting, punchy, early type.”

Snitzel is the current king of the ring, and Lime Country offer Lot 285, a colt who is a three-quarter-brother to Australia’s Co-champion 2YO Colt Invader (Snitzel). His dam Star of Sydney, is a young half-sister to both Gr.1 winner Invader, and Hong Kong stakes winner Not Listenin’tome. “He has a bit more size and scope to him that you would expect and the page speaks for itself.”

Another colt closely related to a star is Lot 233 by Golden Slipper Winner Sebring. This colt is the first foal out of Rubi Dee, a young full sister to Gr.1 winner and emerging sire Brazen Beau. “He has a lot of Brazen Beau about him as a type. Very a compact, dark, muscular sort of horse, who has a lot of presence about him.”

A duo of yearlings by rising star sire So You Think (Nakeeta Jane etc.) is led by Lot 17, a half-sister to Gr.2 winner (of eight races) Miss Gunpowder, whose dam Forever Rafter is a winning half-sister to Gr.1 winner Absolut Glam and to the speedy Nobby Snip-Fun Tapestry (HK). “A beautiful quality filly, she’s all class.” So You Think’s colt, Lot 186, is out of city winning mare Power of Love, from the family of Gr.1 winner Calm Harbour. “Half-brother to Vaucluse Bay, a sharp horse currently winning who’s a potential black type horse.”

Makfi, the sire of Gr.1 winner Bonneval, has Lot 245, a colt from a winning daughter of Gr.1 winner Wrap Around, making this the family of Gr.1 winner Fashions Afield, and group winner Kiss and Make Up. Hinchinbrook has a filly, Lot 165, who is the second foal of Gr.1 placed winner Our Miss Jones, herself a full sister to stakes winner Marianne. Black Caviar’s Gr.1 winning half-brother All Too Hard has started his stud career well, and his colt, Lot 362 is the second foal of dual Gr.2 winner Arinosa, from the family of Sweet Sherry, and Black Toga. “This is the first foal offered at sale from this elite race mare. He’s a lovely loose moving, quality individual.”

Six yearlings in this draft are by first or second season sires, and buyers wanting to find the next big thing should inspect these yearlings, such as the Deep Field filly, Lot 411, who is the first foal of seven race Listed winner Cool Trade (Trade Fair), or the Dissident colt, Lot 253, who is the second foal of stakes placed winner Sense of Hite (Street Sense) from the family of Whitlam, Etymology, and Dirty.

Two colts by first season sire and Golden Slipper winner Vancouver will attract plenty of attention. Bred for early speed, Lot 42 is a colt out of Champion 2YO Filly in Australia, Headway (Charge Forward). Headway’s All Too Hard filly Progression has won twice recently. “Out of a Champion 2YO by a Champion 2YO, he’s a really exciting horse.” The other Vancouver colt, Lot 20, is a half to group placed winner Moreau, from the family of Champion 2YO in USA, Arazi. “An attractive correct horse from a stallion’s family, whose dam is doing the job.”

Lime Country Thoroughbreds will present two yearlings by Gr.1 Blue Diamond Stakes winner Pride of Dubai at the Easter Sale, including Lot 62, a colt out of a young half-sister to Gr.2 winner Rain Drum, Listed winner Snitzel Spirit, and group placed winner Indelible. “We waited for Easter with this colt and he’s grown out nicely. One of only eight Pride of Dubai colts in this sale, we think he’s one of the nicest by his sire that we’ve seen across all the other sales so far.” The other Pride of Dubai yearling in this draft is Lot 161, a filly from the wonderful Makybe Diva family. She is a half-sister to both Gr.1 placed winner Believe, and stakes placed winner Rinjani, while her dam Optimist is a half-sister to Makybe Diva, Musket, La Amistad, and Valkyrie Diva (dam of Jolly Banner, C’est Beau La Via, and Wales). “She is most like Pride of Dubai as a type that we’ve seen anywhere. Same head, topline, muscle, colour, very much like him. Obviously the nicest ones have waited for Easter, and our two fit that mould as well.”

You’ve only been based in Australia for three Easter Sales thus far, what’s been a highlight of this sale so far for the farm?

I think it was the focus and attention on us while selling Lot 1 last year for the inaugural Easter Sale at the new complex. The rostrum was chock full, there were cameras everywhere and we sold that filly for $550,000 to Angus Gold. Shadwell had purchased the half-brother off us at Easter the year before for $625,000. We hadn’t done business with the breeder of those two yearlings before our move to Australia and thus far they are the two highest priced yearlings our client has ever sold at auction, so that was a particularly sweet moment.

Over the years, we’ve been involved with vastly different ranges of horse work – show jumping, eventing, stock horses, polo and bloodstock, therefore we’ve had advice from a great group of knowledgeable people. Firstly, when doing anything with stock don’t rush, set it up properly before you start, ensuring there is only one outcome (the one you want). Only breed or buy something you’d be happy to keep, all breeders/pin-hookers are going to be racehorse owners at some stage. Finally, notice things that leave your stock unhappy and make changes where possible to improve their daily life, the horse that relaxes, eats and sleeps is healthier, less accident prone, more fertile/gets to the sale/performs better for longer for less cost.

Is there something you constantly lose at your house or anywhere?

Phone, keys, iPad, passport, dog, handbag, patience with teenagers, you name it. Thankfully, my husband is still yet to get lost.