John Muir’s involvement in the industry as a breeder is within touching distance of 50 years, but it took no time at all for buyers to come to know and trust horses from his Milburn Creek. 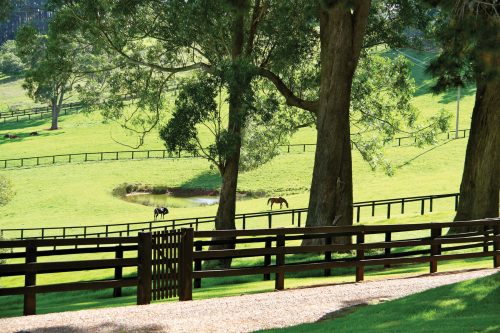 Whether they be homebreds or stock raised and prepared on behalf of clients, any youngster consigned under the Milburn Creek banner can expect to spend plenty of time out of its box under inspection, such is the farm’s reputation. And as the farm’s website appropriately says, “reputations don’t just happen – they have to be earned.”

In preparation for the Inglis Easter Sale, Farm Manager Scott Holcombe gave us his thoughts on the 10 yearlings headed for Riverside.

Milburn Creek’s first offering of the sale will enter as Lot 77 and is bound to create plenty of interest as a son of the crack sire Sebring out of the Encosta De Lago mare Kissed By The Sun. “On looks this fellow is very typical of his family, one which is drenched with colonial black-type. He’s tall for a first foal, but lovely and correct, bred on one of the sire’s best proven crosses”, said Scott.

Twice a winner over middle-distances, Kissed By The Sun brings plenty of pedigree to the page being a half-sister to Eremein (Timber Country) who won no fewer than five Gr.1s including an Australian Derby, a Tancred Stakes and a Queen Elizabeth Stakes. Also, their Bernardini half-sister Peace Force won at Gr.3 level and another half-sister in Gliding was a Listed winner in Melbourne.

The Sebring colt will be followed not long after by the first of a pair of Zoustars, a stallion whose impact through his first two crops has sent a clear signal to the market that he consistently passes on his own outstanding ability.

The first will be Lot 106, a youngster that has everything a buyer could want to see as he leaves his box. Scott thinks “He’s a strong, correct and very forward type who moves like his father. His dam Madamesta (Estambul) has dropped tough gallopers like the Listed winning speedster Bullpit while she is a half-sister to the Listed winner Riceman who won no fewer than 16 races.”

The other Milburn Creek Zoustar is the first foal of the winning Exceed And Excel mare Rosie Quadrille which sells as Lot 230. “He’s certainly a racy sort, another that moves well. The mare has done a great job with this, her first foal.” The dam is a half-sister to the multiple Group winning mare Judged (High Yield), herself a half-sister to another multiple Group race winner and Gr.1 placegetter in Lawyer (Waajib).

The team will also take three yearlings to Riverside by the ever popular Written Tycoon whose stallion ability was again on show with Booker’s recent Gr.1 Oakleigh Plate win.

The trio will be led off by Lot 193, a big, strong colt out of Prettyhappyaboutit by Magnus. This is speed on speed here in the pedigree as the dam won four times up to 1050 metres including the Listed Lightning Stakes at Morphettville. Out of a half-sister to another Listed winner in Born To Rock (Fastnet Rock), this fellow has impressed Scott. “He’s in the mould of the typically fast Written Tycoons with great bone, good depth of girth, a perfect shoulder and great hip. He is definitely going to be popular.”

The other Written Tycoon colt, Lot 329, is also out of a Listed winner, this one the Hussonet mare Walk With Attitude whose grandam Fayfa comes from the family of I Am Invincible’s sire Invincible Spirit. “It’s an interesting mix of two of the current great sprinting lines in Australia and, throw in that he is a forward type very much like Capitalist, and here is one that will definitely make a two-year-old. We sold Spend, the Snitzel half-brother, last year and we hear he is doing everything right with Team Hawkes.”

But if your preference is for Written Tycoon fillies then John and the team have a smooth moving lass that is bound to appeal to trainers and those looking for residual value in the future. Unraced, but a sister to the Gr.3 Carbine Club Stakes winner Mr Chard, the dam Miss Chard has started off with two winners from her first two foals including Lessyd (Statue Of Liberty) who also ran third in the Inglis Premier. And there are some pretty good names down in the pedigree including Canny Lad, Canny Lass, Camarena, Camarilla, Guelph and Sepoy so there is no denying the family gets good horses it’s one of the best in the Stud Book. The filly goes through as Lot 120.

With a pair of Grade 1 winners in the United States and a handful of Stakes winners across the globe just last year, More Than Ready continues to be a force at the top end of the market and Milburn Creek will offer a daughter of his that just oozes class as Lot 368. She is out of the Zabeel mare Attractive, a half-sister to the Gr.1 Goodwood Handicap winner Velocitea, the Gr.2 placed Maastricht (Mastercraftsman) and the recent Listed winner in New Zealand in Weaponry (Declaration Of War). What the printed catalogue doesn’t show is Maastricht’s first foal is this season’s Gr.3 Chairman’s Stakes winner Loving Gaby (I Am Invincible) and everyone at the farm has their fingers crossed for a further major update before the sale as she pushes on to the Golden Slipper after her luckless effort in the Blue Diamond Stakes. “Despite being a late foal she is very forward, lives up to her dam’s name and is a good moving filly with a strong hip”, said Scott. While the majority of the Milburn Creek draft comprises yearlings by well established sires, the farm will also offer three youngsters by stallions that are exciting newcomers to the market.

The first crop of Exosphere have been very well received so far and the Southern Highlands based farm have in their draft a stunning colt out of the unraced Commands mare Midnight Fantasy. In Scott’s opinion “Lot 115 is a good boned colt with a great hip and lovely topline, you can see the Lonhro and Commands coming out in him.” And he wants for nothing on the catalogue page as a half-brother to two winners, his dam is out of the Gr.1 Salinger Stakes winner Ancient Song, a daughter of that wonderful broodmare sire Canny Lad. This pedigree is very deep and can also lay claim to four-time Gr.1 winner Preferment.

Pride Of Dubai was a handsome horse to look at and he has passed that down to Lot 356, his first crop son out of the Irish bred mare Amo Ami Ama. Here is a colt that any buyer can attack the Classics with, his dam being a 2250 metre winner in France by that great staying influence Monsun, sire of three Melbourne Cup winners. Another pedigree laced with black-type, Amo Ami Ama’s Galileo half-sister Ampere won the Gr.2 Prix Hocquart at Longchamp being out of the Grade 1 Del Mar Oaks winner Amorama by Sri Pekan. “He’s a good moving colt with a powerful shoulder and deep girth who will take a little time but he will be worth it” offered Scott.

The final offering for the sale from Milburn Creek will be Lot 374, a second crop colt of Dissident (Sebring). The farm will offer the Champion Miler’s three-quarter sister to Chris Waller’s very promising filly Bring The Magic, a recent winner in Sydney, out of the Bernardini mare Belladini. The farm bred Bring The Magic as well as her Not A Single Doubt two-year-old half-sister Balaabel who is in training with Tony McEvoy and has won a trial as she chases the Autumn riches. According to Scott “She has a lot of More Than Ready about her so she can be expected to come to hand quickly.” The filly has as her third dam Twiglet (Twig Moss) dam of Hong Kong Champion Fairy King Prawn and the Gr.1 Salinger Stakes winner Easy Rocking. As in years gone by John, Scott and the team have been amongst the busiest consignors at Easter, whether it was Newmarket or now at Riverside 2019 where they should continue the trend. But then that just follows from having earned that wonderful reputation which they pride themselves on. They look forward to meeting old clients and friends, and making new ones.