It would not be Karaka without Windsor Park, over decades one of New Zealand’s best known, most respected and most successful thoroughbred breeding operations represented by quality drafts.

And 2020 is no different with Marketing Manager Michael Moran “very happy with the strength and quality of our yearlings.”
“Especially exciting is the fact that we have three first season stallions represented which would be a first in New Zealand.” 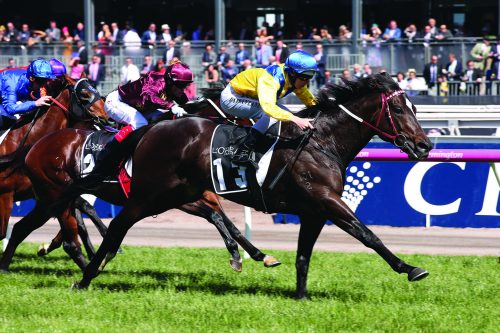 And three very nice horses they are too; Turn Me Loose, Rageese and Vanbrugh.
“Turn Me Loose is the most represented stallion across the sales series,” he said of the triple Group One winner (New Zealand 2000 Guineas, 1600m, Emirates Stakes, 1600m, Futurity Stakes, 1400m) who has been well supported by broodmare owners, serving 268 mares in his first two seasons at stud.
“He has left an impressive group of yearlings,” Moran said, describing them as “strong, powerful athletes like their sire.”
Windsor Park take 13 Turn Me Loose youngsters to Karaka Book 1 with the stand-outs including lot 38, a half-sister to the last start Gr.2 Moonee Valley Classic (1600m) winner Fascino and impressive last start Sydney winner Gunga Din (ShamExpress). Boasting crosses of Nureyev and his dam Special, she is a daughter of Lady Kipling, winner of 11 races, three of those at Group level.
“She is one of the top yearlings in our draft,” Windsor Park’s General Manager Steve Till enthused. “She is a mature, forward style of filly, more robust than Fascino was at the same stage. She has a Group One temperament and is a great example of what Turn Me Loose is siring.”
Also an eye-catcher is lot 588, a half brother to the South Australian Derby-Gr.1, 2500m runner-up Savvy Oak who was in winning form at Flemington during Cup week. His dam is the Auraria Stakes-Gr.3, 1800m winner Fairy Oak whose dam is a half-sister to the Group One gallopers Field Dancer and Just A Dancer.
“We sold Fairy Oak as a yearling,” Till recalled, “and we were happy to buy her back after she finished racing. This family has been at Windsor Park for four decades with Fairy Oak’s grandam Field Nymph being one of our foundation mares. This colt is a very nice type, athletic with great quality.”
Three yearlings by Street Cry’s son Rageese are also part of Windsor Park’s Book 1 draft and Moran is confident that his progeny will be well received.

“He was a high class two-year-old, the fourth highest rated colt in Australia,” Moran said, “and he trained right on, a stakes winner at three and four. He was a very talented horse who was only just beaten by Pride Of Dubai in the ATC Sires’ Produce Stakes-Gr.1, 1400m and he has a great genetic structure to his pedigree.”
“By Street Cry out of a Dehere mare who is out of a Sunday Silence mare who is out of a Danehill daughter of Bletchingly’s champion Emancipation. This is a great family and with his super physique he ticks a lot of boxes.”
Amongst the Rageese yearlings for sale is lot 367, son of the two times Group One placed Trepidation whose Group Two placed half-sister Fairy Tipsy has produced the Group One winner Distill. His third dam is the Group One sprinter Boardwalk Angel (dam of NZ Champion Sprinter/Miler Coogee Walk), descendant of Phar Lap’s dam Entreaty.
“He really looks the part,” said Till. “He is a tidy, well made colt by a stallion who is proving dominant siring physically forward yearlings.
He is from a fast family and he will be one of Rageese’s top sellers.”
Such outstanding stallions as Savabeel and Dundeel have the Spring Champion Stakes-Gr.1, 2000m on their resume as does Vanbrugh who is also a yearling sales debutant in 2020.
“The Encosta de Lago sire line is thriving with the likes of Zoustar, Deep Field and co,” Moran said, “and the best ones seem to be the more precocious ones. Vanbrugh was a Randwick winner on debut at two then a few months later he was Sydney’s best three-year-old, winning the Spring Champion and Gloaming Stakes double as well as beating the older horses over a mile.”
Again a group winner at four, Vanbrugh is a particularly good looking horse, described by Moran as being “gorgeous with a lot of quality. And he is from a great family with his grandam being that wonderful broodmare Professionelle.”
A good example of the Vanbrugh breed is lot 656, a half-brother to the exciting stakes winner Helena Baby out of the city winner Hot Stash whose stakes placed dam Abeel Hostess by Zabeel is a 3/4 sister to the four times Group winner Zabarra.
“I well remember Hot Stash’s grandam Fickle Hostess,” Till said, “she was as nice a mare as you would ever see and we were very happy to be able to buy her daughter Abeel Hostess and then Hot Stash whose son Helena Bay has been one of the most talked about horses in New Zealand this year, winning five in a row, Group One placed behind Melody Belle before heading to Hong Kong.”
“He is a late foal but he is developing well leading up to the sale, he is a quality athlete who is sure to prove popular.”
Also exciting for Windsor Park is the start made by triple Group One winner Charm Spirit whose first southern hemisphere crop has yielded three Group winners (Aretha, Fascino and Gr.1 NZ Derby bound Scorpz). One of the highlights of his draft is lot 535, the second foal for the city placed Encosta de Lago mare Daring.
A granddaughter of the outstanding broodmare Subterfuge (dam of stakes winners Shania Dane, Scintillation and Risk Aversion), this filly boasts an intriguing pedigree inclusive of duplications of the influential mares Natalma, Fairy Bridge, Lalun and Charm Spirit’s fourth dam Ciboulette.
“We are very excited by the start Charm Spirit has made,” Till said, “and this filly is very well made and correct with an outstanding temperament.”
Plenty to look forward to with fellow Windsor Park stallion Mongolian Khan also, the triple Group One winner represented by his first two-year-olds this season. He too has some very nice yearlings at the sale including lot 650, a half-brother to the Caulfield Guineas-Gr.1, 1600m placed stakes winner Vassilator.
“Everyone was very impressed with Mongolian Khan’s first yearlings,” Till noted, “and they sold very well to top trainers throughout Australasia and Asia. This colt is a super example of what he throws, a very well balanced horse who uses himself extremely well.”
Several other high class stallions are represented in the draft, including Savabeel, that W.S Cox Plate-Gr.1, 2040m winner the sire of lot 137, the first foal for Nymph, daughter of the Group Three mare Fairy Oak.
“He is very progressive,” said Till. “His dam unfortunately went amiss after winning at Ellerslie but she had a lot of talent, so much so that we thought she was worthy of an opportunity with a top stallion and she has done a great job with a very nice individual.”
Till has been with Windsor Park for four decades, Moran keen to point out that the success of the stud is down to its great staff – “it is very much to with the management structure,” he said, adding that newcomer Victoria Wang, recruited as Regional Manager – Asia, is a great addition to the team, “a wonderful asset.” ✦